This Peregian Beach eatery is the perfect blend of European class and Sunny Coast cool. 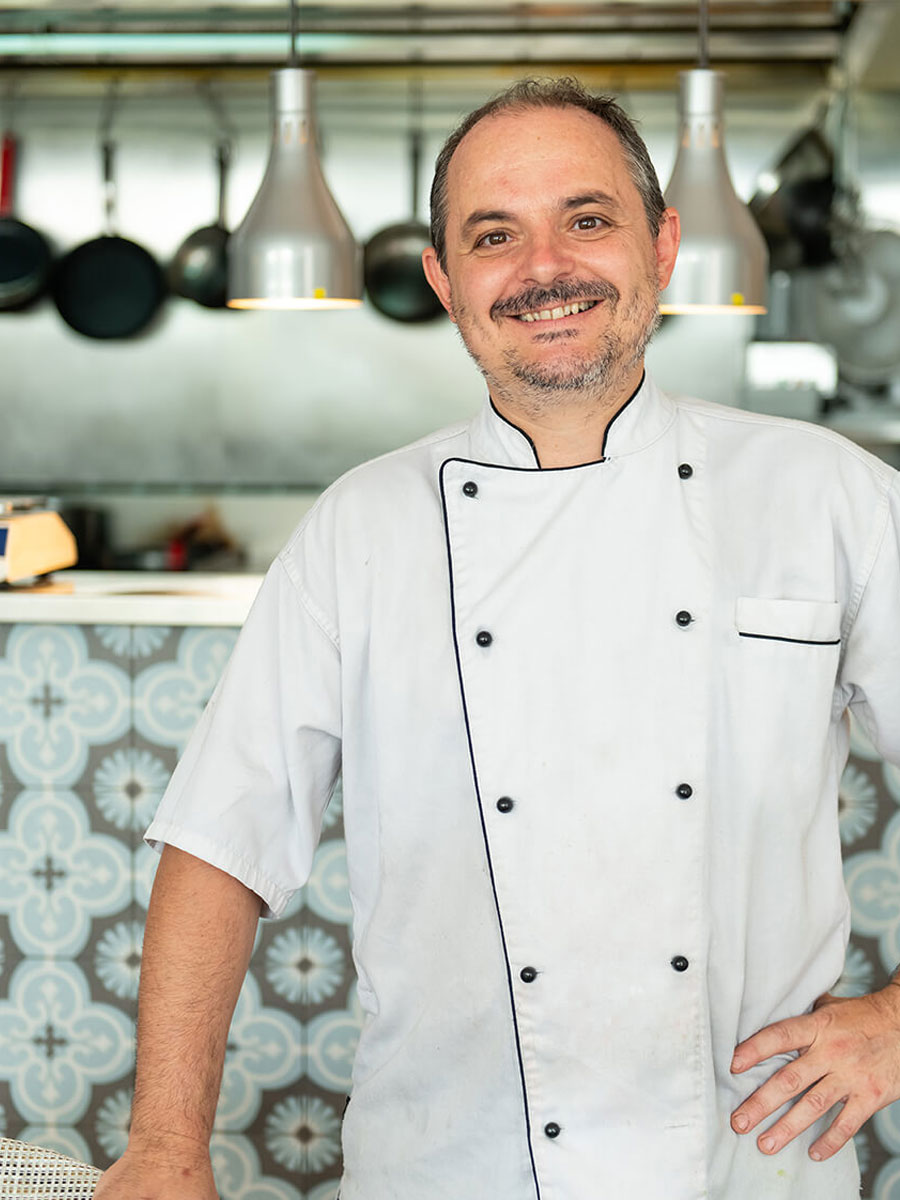 It’s a little slice of the Mediterranean tucked into the Peregian Square. Textured walls and warm tones, splashes of blue throughout and pink carnations sticking out of glass vases on every table. The doors are all open, bringing the outdoors inside.

Frank Boulay and Karin Doeldl opened Periwinkle in January 2017 because they wanted to create their own special space, somewhere they could showcase the cuisine they loved most.

“We spent 20 years travelling the world both solo and together, working in some incredible restaurants as waiters, in kitchens or as chefs. We decided it was time to try something for ourselves; create something we loved and that was ours,” Frank says in his thick French accent.

The couple moved to Australia 10 years ago, spending the first four years in Sydney before heading north to seek out the sun and a perfect place to raise their family and bring their dream to life.

“It was really important for us to find the right spot if we were going to settle and create the restaurant we wanted,” Frank says. “As soon as we found this space in the Peregian Square we knew it was perfect.”

“Even the name made sense,” he says. “A Periwinkle is a small snail from the sea, and we are right by the sea here. I actually used to work in a place in the Caribbean, in a similar area, that was called Periwinkle. We knew the name would suit here too; it was a great fit and would allow us to blend into the area really well,” he says.

“Peregian is vibrant and it is becoming very popular as a food hub,” he says. “Something else that is really nice is that the square is great for kids. They can be in the park, playing, happy and their parents can have dinner anywhere around the square and not worry too much. They can actually sit back and enjoy the food they are eating, which doesn’t happen often.”

And this is something Frank and Karin know a lot about with eight-year-old and six-year-old daughters and a “very energetic” two-year-old son.

“It is like we have two full-time jobs sometimes with the restaurant and the kids,” Frank laughs.

But despite the time constraints, the pair has dished up something magical, bringing skills and knowledge from years spent travelling the world to the well-dressed table.

“When we were young, we worked throughout Europe, in the Caribbean,” Frank says. “We actually met in Puerto Rico, even though I am French and she is Austrian. We lived in Grand Cayman, worked on cruise ships, which was the hardest job I’ve ever done. We worked in America, lived in Boston for three years. I suppose we have worked in a wide variety of countries and we have taken a lot of the skills and techniques from these places and we use them now in our own restaurant.”

It is evident in the menu too. You would assume the food at Periwinkle would be predominantly French, but Frank says he likes to match the food with the customers. “Of course, because I am the chef and I am French, I cook with a lot of French techniques, but the food itself is probably more Mediterranean,” he says. “It is very similar here to the Mediterranean with the ocean breeze, the alfresco dining. I never wanted it to be just French food. I wanted it to be something everyone can enjoy and something that can change into whatever we want it to be.”

“We like to try different cuisines, but with a lot of French techniques. We use many recipes from French cooking, we make a French vinaigrette, French sauces.

“We also make our own sourdough bread here every day using French techniques and with French and Australian flour. It is so popular, customers come in and ask us to buy it in loaves.

Aside from the delicious crusty sourdough that’s a hit with the locals, Frank says there are a few more items on the menu that he “isn’t allowed to change”.

“We have a lot of regulars because Peregian is very much a locals’ place,” he says. “Every day they come to the square, so we see them all the time, and they have dishes that they love, so even though we try to change the menu every four months, there are items we don’t take off. The soufflé, for example – people don’t want us to take it off.”

Another item that tends to stay on is Frank’s favourite dish to cook, the steak frits. “It is very easy, but it’s all made here by hand, so it’s very good and I love to cook it,” he says. “Other than that, we do like to do things kind of seasonally. Although Queensland doesn’t really have seasons – it’s still 30 degrees in autumn sometimes. But we always try to buy locally and when I do a new menu it’s all things I like to eat. Sometimes I add something I feel like eating in the moment I’m making the menu,” he laughs.