A taste of sunshine 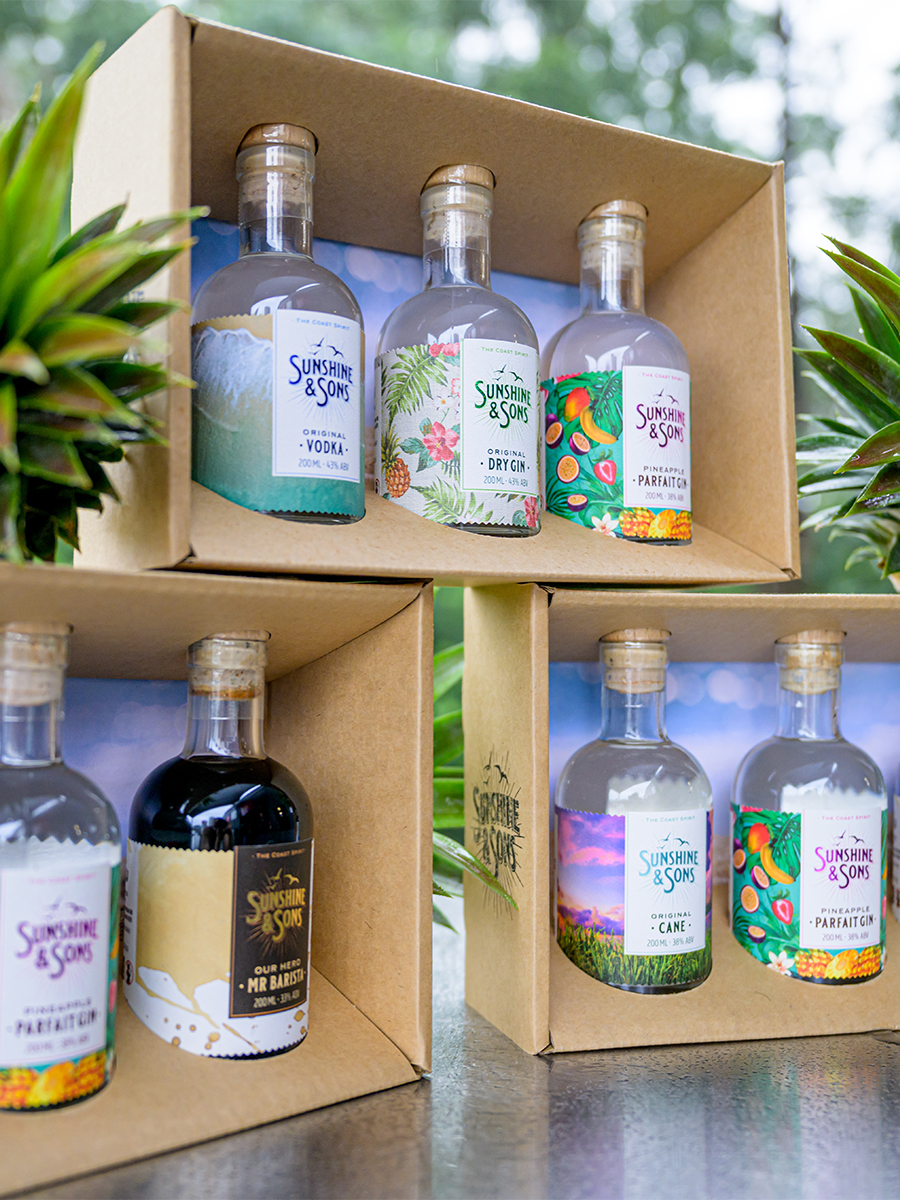 The sun wasn’t shining as we pulled up at Sunshine & Sons. But it didn’t matter. If anything, it made tasting that drop of sunshine in each and every sip of gin, rum and vodka all the more satisfying.

That’s what we were here for – the distillery tour and the tasting. And a little bit of rain wasn’t about to dampen the day.

Four best mates – Adam Chapman, Daniel Vinson, Matt Hobson and Michael Conrad – took a chance back in July 2019, left their careers and created CAVU Distilling so they could live the life they wanted, enjoying beautifully crafted spirits among the warmth and beauty of the Sunshine Coast. It’s a vision and dream they each shared for as long as they could remember. Then, in January 2020, they officially opened their doors under Sunshine & Sons, a play on words that also played homage to the region they love.

We were greeted by one of these owners, Michael, who scored himself the title of ‘chief enjoyologist’, a fitting one we discovered as the afternoon went on. It was hard not to get excited as he spoke of mornings watching the sun rise from behind the rolling green hills, or tables filled with smiling patrons sipping gin and chatting about the week gone by, the scent of rum oozing deliciously from oak barrels across the distillery. He loves it here, a short idyllic walk from Queensland’s iconic Big Pineapple, tucked away in the hinterland.

It was easy to see why.

While there was no sun on the day of our visit, there was an ethereal veil of cloud lingering across the tree tops, and a green wonderland of rainforest in all directions. It was simply beautiful. And that was just the surroundings. Inside the distillery was pretty incredible too. Big oak barrels sat in all directions alongside top-notch stills handmade in Tasmania.

The entire distillery was designed to show off the best rum – something else these guys are really good at.

In fact, on February 22, 2022 (22/2/22) at 2.22pm, they released Australia’s first certified organic molasses rum under their secondary branding, Nil Desperandum.

“It was quite the day,” says Matt, another of the owners. “We are a small business but we think big,” he says. “Australian rum hasn’t achieved a worldwide reputation yet and we want to change that. Our goal is to bring amazing-quality rum to the world stage.

“Adam, our distiller, has more than 30 years’ winemaking experience and an amazing ability to take consumers on a journey using their senses,” Matt adds. “So, all of our rum, and our gin and vodka too, is designed from a distiller’s point of view, meticulously created to be served neat and allow each element its own chance to shine without relying on any garnish, or sweetener.”

And he’s not wrong.

This journey of the senses for me began when I entered the room. The scents filling my nostrils, taken over only by a tingling of the taste buds as I took my first frosty, smooth sip of their original vodka.

What followed was a taste of the ODG (the Original Dry Gin), the most popular spirit made at Sunshine & Sons. As I sipped, I chatted with Matt and Michael and this only added to the experience. I learnt a lot about each of the alcohols. I learnt that this particular gin had full solid juniper flavours upfront, softened with coriander seed, cinnamon and Tasmanian pepper berry for spice, pomegranate seed and lemon peel for the fruitier mid palate, and lavender and rose petal for a soft floral finish. Sounds heavenly right?

“Add a bit of tonic and you’ve got yourself a perfect beverage on a nice warm Sunny Coast afternoon,” Matt says. “That’s what we put in a bottle, drinks designed for our beautiful climate, inspired by locality, combined with the history of the cane and sugar industry in Nambour, and showcasing predominantly local ingredients.”

Next up was the Pineapple Parfait Gin, another crowd pleaser.

“Our Pineapple Parfait Gin is actually dry; it is not sweetened artificially, but rather has notes of pineapple, passionfruit, strawberry and mango with coconut and vanilla,” Matt says. “It was inspired by the pineapple parfait desserts experienced at the Big Pineapple, an iconic tourist attraction that we are lucky enough to have as our neighbour.”

As for the label, even that is impressive. “The lovely label is a link to the fruit in the spirit, but obviously we didn’t add a pink ibis or banana to the gin,” Matt laughs. “We create each label to incorporate aspects of how we relate to the place we live so they are a bit of fun.”

Moving on to the dark spirits, and one of my personal favourites, the rum.

“Our dark spirits are all influenced by time in oak barrels including the aged versions of the vodka and gin plus, of course, our rum, which comes under the label of Nil Desperandum,” Matt says. “The name is a Latin translation of ‘nothing to despair’, which matches perfectly to the uniquely Australian expression of easy-going optimism – no worries. We just love that. It not only sums up the Sunshine Coast, it also gives you an idea of who we are and why we do what we do,” he says.

The first rum to taste was aptly named First. It is Australia’s first organic certified molasses rum with a limited run of 476 bottles. And now most of this rum has gone.

Sipping this rum was an experience – bold, smooth, with rich molasses undertones, moody mocha flavours, chocolate and vanilla, candied pineapple and banana. Delicious. As was One Second, the next batch produced with a more feminine, delicate palate for tasting.

“Third and Go Fourth will be coming out later this year too,” Matt says. “And all of our rum is coloured naturally from the reaction of spirit and natural timber; we use no additives or sweeteners.”

As well as the primary selection of spirits, each week the crew infuses a fresh gin with a “use-by date”. Red Dragon was the tipple of the day on my visit and trust me when I say this could be enjoyed quite easily and solely over ice.

I also had the opportunity to try some of the specialties including the Original Cane, inspired by a South American style of spirit, and Mr Barista, a molasses spirit, tank infused with Segafredo cold brew coffee and Sunshine Coast double roasted macadamia nuts. Yum.

“It really gives it a big rich and bold flavour, and it has been perfectly weighted so that each ingredient gets to be their own hero and shine through in each sip,” Matt says.

He wasn’t wrong and I couldn’t help but make the Mr Barista one of my ‘take some home’ choices after the tour and tastings wrapped up.

The distillery is open seven days a week for tastings and purchases. The team distil and manufacture on weekdays and then bring out the tables, the bar, some cheese and biscuits and get the drinks flowing on the weekends.

“We are also stocked in a couple of hundred venues across the Coast and also in a few hundred retail stores, which is incredible,” Michael says. “COVID made it harder to venture down south so we thought let’s own the Coast and go from there.”

And that is what they have done, getting busier and busier by the day.