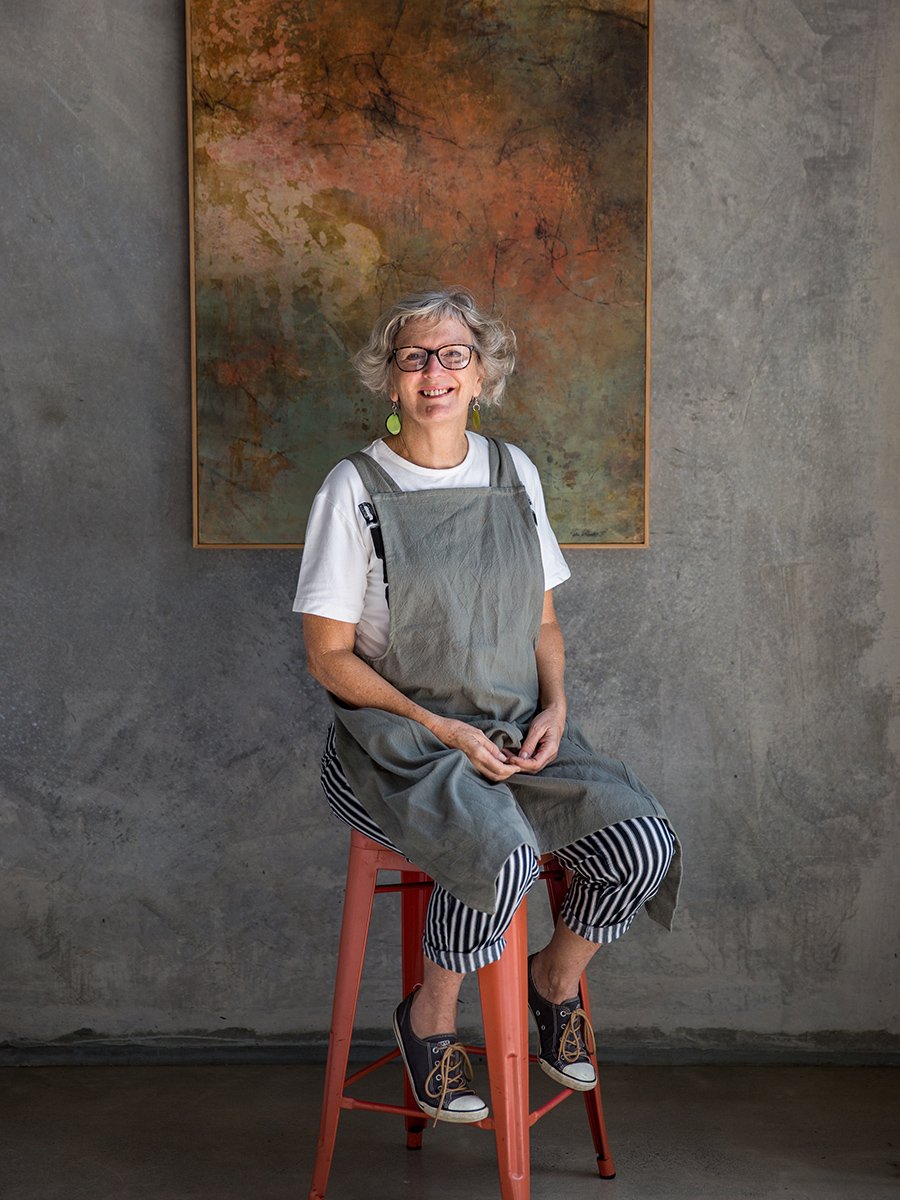 Venturing into unknown territory may be terrifying, but it can also be the source of new and surprising discoveries.

Such is the philosophy of artist Kym Barrett, whose intuitive abstract landscapes in oils and cold wax merge both the external setting in which she paints, and the more complex internal landscape within herself.

“I love the mystery of the unknown – it’s both scary and exhilarating,” says Kym. “What might reveal itself in the process of making a painting; I feel most alive when I’m present to this process.

Working from her studio on her sprawling bushland property at Chatsworth, just north of Gympie, Kym concedes that the beauty of the physical landscape that surrounds her definitely makes its presence known on her canvas.

“I think that just being exposed to that – five acres of bushland, a creek – all of those external images are there in my face all the time, and they can’t help but be incorporated in the work,” says Kym.

“But working intuitively, it means that rather than using photographs or even looking at the things while I’m painting, I’m drawing on something inside as well.”

What that translates to for the viewer is paintings that are almost ethereal in quality – muted earthy tones with glimpses of colour seeping through; multi-layered and richly textured pieces. Sometimes a horizon or a hill is recognisable, sometimes there is less of a familiar form and more of a feeling – a suggestion of something less tangible.

“I definitely want it to evoke a sense of landscape,” Kym says.

“That’s why it’s not purely abstract. I’d like it to evoke a sense of what it maybe feels like in the landscape. Sometimes it looks more like landscape because sometimes it has a horizon, and when I get a horizon line in there, it definitely connects better with people in that sense, because they can identify something. Whereas in others, it’s more of a close-up, if you like; like I’m zooming in.”

Kym’s unique style has evolved over a long career as an artist, which began when her passionate high school art teacher inspired her to do a degree in fine arts. Becoming a teacher herself, Kym taught art for many years and when her own children had flown the nest, she focussed her attention full time on her easel.

Painting figures, abstractly and brightly coloured, gradually evolved into works in mixed media. What she describes as a “turning point” artistically came when she discovered the work of American abstract artist Rebecca Crowell, known for her rich and complex paintings using cold wax and oil paints.

“I just knew then that I had to know everything that I could find out about her and her work and this process.”

That process, which has now become Kym’s characteristic style, involves using a cold wax medium that she makes herself with a mixture of melted wax with a hardener and a solvent. The mixture, which stays soft in a bottle, is then added to the oil paints. The solvent evaporates in the air and the drying process, which is typically very slow for oil paints, speeds up considerably. There are a multitude of techniques and tools Kym uses with the wax to achieve the desired texture and effect.

“You build up layer upon layer upon layer, and then you can cut back into it either with a palate knife, or you can dissolve back into it with solvents to get down to other layers,” she says.
“I like the muted tones of earth, of the land. But I like the pops of pinks and reds coming through, and other colours.

“The process is a lot of laying down of layers, contrasting layers of paint and wax. I’ll press textures into it, I’ll smooth it over here and there, and in between layers I’ll draw with oil sticks, and transfer paper, and other drawing materials.

“I love that ability to do that. I think what I love about it is that you can get this lovely depth and mystery, which is one of the qualities that I want in my work.”

“It teaches you so much,” she says. “You get attached to certain things, and there’s a resistance to letting go. One of the things it’s taught me over the years is to let go of these attachments. You need to take the risk – let go, for something better, or maybe not better, but something new to emerge.”

For this reason, she says, she always works on five or six paintings concurrently, never one at a time, as this could risk the painting becoming “too precious” and therefore too hard to “let go”. There’s also a risk that a painting may seem too contrived or controlled – something Kym wants to avoid.

Working intuitively involves a certain willingness to relinquish control of the creative process and let instinct take over, she says – letting the painting almost speak for itself.

“I have to remember – let it speak to you, and it’ll tell you what it wants.

“It’s listening to the painting – instead of controlling it.

It’s just listening to that painting and turning it around and seeing what it suggests. So, actually listening to the inner part of yourself. If you listen to that, that’s going to take you on an interesting path.
“It’s exciting but it’s scary – you’re on the edge. I’ve learnt I guess from practise now that you’ve got to push past that scariness and just do it – that’s the intuitive process.”