Singer Tobias Merz and dancer Fiona Jopp have left the bright lights and big city behind for a quieter life in Maleny. 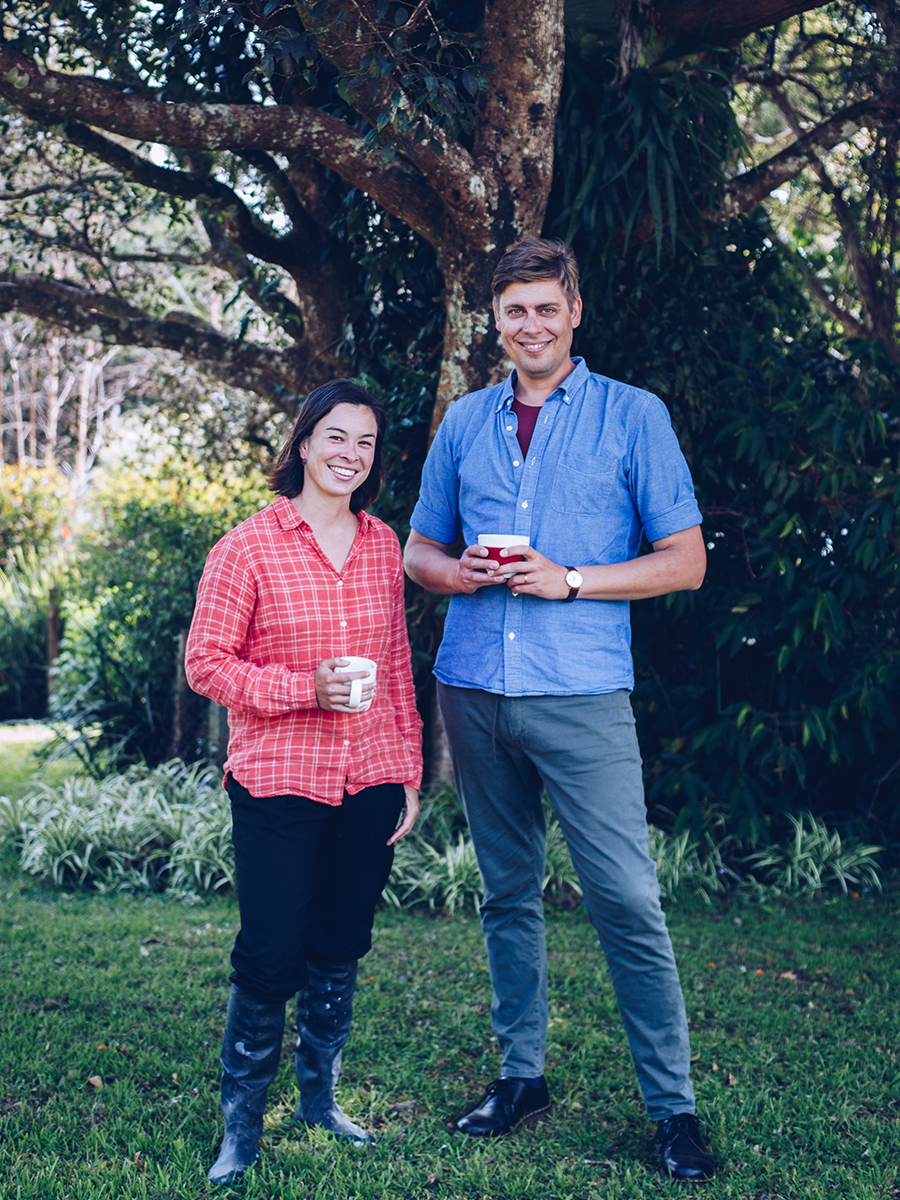 The Sunshine Coast is a world away from the dynamic performing arts scenes of the cities they’ve inhabited since they met in the Netherlands 15 years ago, but Tobias Merz and Fiona Jopp aren’t missing city life – well, not too much. Having moved to Maleny in June, they’re enjoying the thriving creative community they now call home and are feeling optimistic about a fresh start high in the green hills, away from the pollution, traffic congestion and cut-throat competition of the city.

Both have excelled in their careers – he as an opera singer, she as a contemporary dancer – and now they crave a country home with a bit of land to tend and the time and space to dream up new creative ventures.

When they’re not taking to the stage, they like to channel their creative energy into their home environment. At the time of writing, they’re in the midst of selling their Sydney home, which they poured their hearts and souls into before deciding – somewhat on a whim – to leave it all behind.

“We like to design where we’re living,” says Fiona. “Gardening is my passion – my current hero is Greta Thunberg. The sustainable, responsible lifestyle is something I’m extremely attracted to. You can be off-grid here; you can’t be in the city. You can grow more than your own fill of vegetables and that’s definitely an ideal.

“Sustainability is at the forefront of our minds,” says Tobias. “We’re very much into the whole plastic-free thing and we will be forevermore. We have the space to do what we want to do here, which you don’t really have in a busy, angry city. I don’t deal well with competition and pressure and it’s got worse as I’ve got older. I’ve realised it’s not necessary.”

While they’re only in their thirties, they’ve both experienced a level of success in their fields that now allows them to choose the projects they’ll take on. They’re free to follow their domestic passions, as well as pass their art forms onto others. Tobias has been teaching singing for 10 years, and has recently opened the Hinterland Singing Studio, and Fiona is teaching dance through The Dance Academy, which runs classes in Maleny, Landsborough and Mapleton.

“I want the teaching to be the core of what I do,” says Tobias. “I really enjoy teaching. I love seeing [the student] grow as a person because singing is very much connected with your confidence and your body and I really enjoy seeing people open up to become more aware of themselves through singing, which is lovely to see, especially in young people. It’s amazing what a difference it makes, something as simple as opening up your chest.”

Tobias grew up in a musical family in New Zealand. “Music was an important part of my life. I started singing and it was never really a choice, it was just something I was good at. I had a jazz band as a teenager and started taking classical singing lessons. When that took off and I started winning competitions, I saw it as a ticket out of New Zealand. My parents are Dutch, so I went to Holland to study at the Royal Conservatory in The Hague, and the rest is history.”

And what a rich history it is. His first job was with Opera Australia and he went on to work with the English National Opera, Opera North (UK), Scottish Opera, Grange Park Opera (UK), Opera Della Luna (UK tour), Carl Rosa Company (UK tour) and The Buxton Gilbert and Sullivan Opera Company. Alongside this, Tobias kept up a two-man show Wine and What Ho! performing jazz and cabaret in bars in London. In this stellar career, a few highlights stand out.

“I got to sing for Dame Joan Sutherland in London, which was lovely. I also remember the first time I sang in the Sydney Opera House in 2004. The curtain goes up, it’s my first job out of the conservatorium. Just walking up to that building, you feel a sense of awe; it’s just such a beautiful building. Another highlight was my first job with the English National Opera on the London Coliseum stage. It was such a buzz being in that gorgeous theatre, just feeling the gravity of everything that’s gone before you and being part of that.”

Fiona had her own pinch-me moment on her first job as a contemporary dancer with the Michael Clark Company in London, when she was asked by one of the star dancers to learn her solo.

“I was only 21 and I performed the opening solo of the night on the Barbican stage. Baryshnikov is a patron, Kate Moss was in the audience, the who’s who of the London scene are supporters. I was one of 300 people who turned up for an audition and ended up with a solo. It was absolutely career changing for me and totally spring-boarded everything else.”

Growing up on the Gold Coast, she started dancing at age three and studied at the Gold Coast City Ballet, travelling to Europe at 15 to study at the Palucca School in Dresden and the Royal Conservatory in The Hague, where she later met Tobias. They lived in London together for eight years before moving to Sydney in 2012, when Fiona was offered a job with the Sydney Dance Company.

Her accomplishments include a role in the Australian production of The Lion King, film and music video appearances and numerous roles in productions with long-time collaborator Rafael Bonachela, artistic director of the Sydney Dance Company. Her first foray into choreography was a piece for Sydney Dance Company’s New Breed 2015 season at Carriageworks.

Tobias also composed a piece for Sydney Dance Company’s New Breed season, where he shared the stage with dancers for the first time.

“It was very exciting but also very nerve-racking,” he says. “The dancers are so beautiful and I felt like a huge sack of potatoes next to them. There’s a lot to live up to with these people who use their bodies so beautifully. As an opera singer, you’re trained to use your posture to sing, but I wanted to not stick out like a sore thumb and had to relearn how to carry myself.”
This admiration Tobias feels for dancers extends, of course, to his wife and she returns the admiration in equal measure.

“We’re so rubbish at each other’s art forms, so it’s lovely to be in awe of each other,” says Tobias. “There’s a constant ‘wow’ any time we see each other perform. It’s lovely to be reminded of what you’re capable of. Day-to-day living can be so drab and she’s magical when she moves.”

“Likewise,” says Fiona. “It’s magic. It’s like a whole other world opens up. Hearing him sing with the Sydney Dance Company was transcendent.”

They’re hoping to share their talents with the Sunshine Coast, not just through teaching, but through an event that attracts professional performing arts companies. “We want to help enrich the artistic life here,” says Tobias. “It’s already a vibrant, artistic place and we have some good contacts we could bring.”

While this cosmopolitan couple admit they’ve found Maleny’s nightlife a little on the quiet side, they’re not complaining.

“That’s what we wanted, a small community,” says Fiona. “You walk down the street and you can feel the community vibe. There are lots of cute markets. I guess what attracted us here is the strong arts community and the freedom to choose how our careers go, because freelancing in Sydney is very limited. It was an exciting idea to come here and create what we want to do, rather than fit into someone else’s idea of what we should be doing.”