Three decades ago, Dennis Massoud drew a line in the sand – both metaphorically and literally – that would change the course of his life. 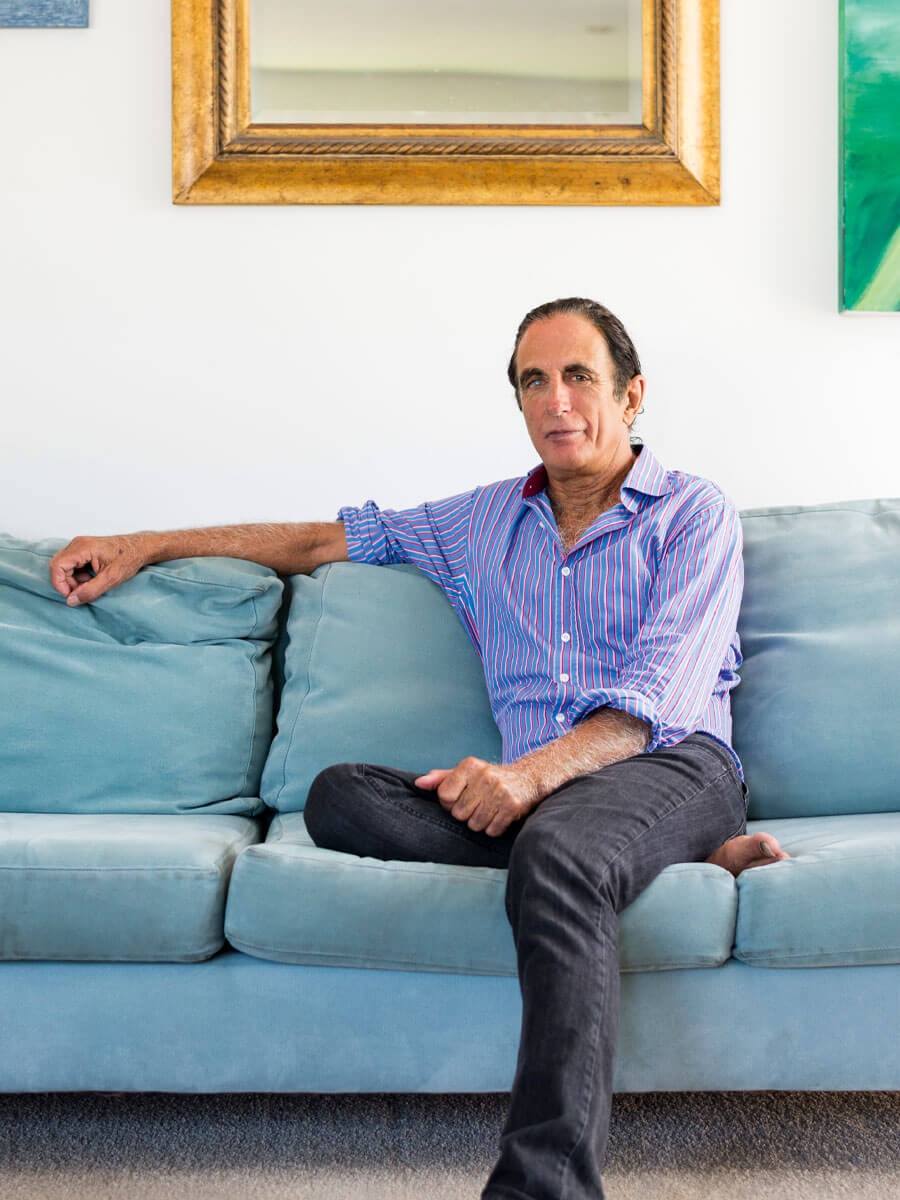 Three decades ago, Dennis Massoud drew a line in the sand – both metaphorically and literally – that would change the course of his life. He took his son Luke, who was three at the time, to Noosa’s Tea Tree Bay and they played in the sand, like so many other Sunshine Coast fathers and sons do. Luke instructed his dad to make lions, castles and mermaids and Dennis happily obliged. Then people began to gather around and throw money into the water bucket, and so began his career as The Sandman.

Until that point, Dennis had been busy running a photography business with his brother-in-law and was missing out on quality time with his family as he clocked up 12 hour days. It was the sadness he saw in Luke’s eyes one day as he rushed out the door that prompted Dennis to promise him they would spend special time every weekend together, doing whatever Luke wanted to do. This was how Dennis discovered his innate talent for sand sculpting, a vocation that has taken him and his children around the world multiple times.

It was while busking on a beach in Lorne on the Great Ocean Road, making between $1000 and $1500 a day, that the long-haired bohemian artist was ‘discovered’ and sent to the US to take part in his first competition. The only participant from the southern hemisphere, it was his first experience with hard compaction sand sculpting and he made a big impression despite being an underdog. After that, his career took off. Between 2000 and 2007, he travelled nine times around the world, riding a wave of success from competitions offering big prize money to lucrative commissions.

But it was much earlier than that when Dennis first discovered he had a thing for sand.

“My family settled in Noosa in 1900 and pioneered tourism in Noosa,” Dennis says. “They were the first people to drive a vehicle on the North Shore and to do the coloured sand tours just past Teewah. My grandmother trained me to put coloured sand in oyster bottles, making designs like houses and ships and palm trees and I’d sell them at tourist shops.

“One of the things I did as a child – it wasn’t very environmentally friendly – was to carve faces in the sand dunes when my father and uncle would take the coloured sand tours. It became a tourist attraction and my uncle, if it wasn’t school holidays, would try and pull me out of school to carve faces into the dunes. That’s when I unconsciously got into sand sculpting, when I was seven.”

Dennis’ grandparents migrated to Australia from Lebanon and owned much of Gympie Terrace in Noosaville (Massoud Park and Jetty are named after them). It was an idyllic childhood enriched by pristine natural beauty, strong family ties and famous family friends like Sean Connery and Diane Cilento, who’d visit Noosa to go fishing with Dennis’ dad and uncle.

Dennis remembers roaming freely between homes in the family compound that surrounded the main house on Gympie Terrace, a grand 14-bedroom colonial beauty where functions and birthday parties were held and Dennis would sometimes spend the night.

“It was like the grand hall and I was surrounded by my cousins,” he says. “We’d all meet at least once a week in the big family home. My grandfather built a cafe next door, which is still in existence today – Maisie’s seafood restaurant – which is the oldest cafe in Noosa.

“There were very few families and a permanent population of about 300,” he recalls. “The river was absolutely crystal clear and near our jetty we had a beautiful white sandy beach. I remember in the ’60s, there was a girl I used to go to primary school with. One night, we laid down on the bitumen on Gympie Terrace in front of the shops just across from the boats to stay warm and we were looking at the stars and fell asleep on the road. Two-and-a-half-hours later, Maureen’s family was worried about her and came and woke us up.”

With memories like these, it’s no wonder Dennis became fiercely protective of his little patch of paradise. A staunch environmental activist, he spent 10 years protesting a development proposal to build 20-storey buildings down both sides of Hastings Street in Noosa. He was a founding member of the Noosa National Park Team, which collected 1.5 million signatures opposing the development, and he has been involved with numerous actions to preserve Noosa over the years – some he’s won, some he’s lost.

“I’ve had a very short fuse,” he says. “I can be a little short-tempered and not very patient. Sand sculpting has actually taught me patience and taught me don’t ever give up. For me, as an environmental activist, seeing all the changes in Noosa that really disturbed me emotionally and mentally and I wasn’t happy with, sand sculpture has helped me let go of these things I can’t change.

“If everybody can realise they’ve done their best and let things go that are really annoying them or upsetting them, they’ll really find that inner joy and happiness.”

Sand sculpting hasn’t only brought more emotional balance into his life, it has also provided a good income. With event organisers around the world seeking sand sculptures to add the ‘wow’ factor, Dennis says the world’s top sculptors can earn $180,000 a year. There’s just something about sand that reaches a deep place in the human psyche and brings out the child in each of us.

“As a sand sculptor, if you’re good at what you do, you could spend the rest of your life just travelling the world from one gig to the next and get paid very well,” he says. “I think people like it because it’s ephemeral. It’s not permanent and it’s so fragile. Anyone can run into it and knock it over and it’s finished. I think it also touches a place in our hearts. Something in people’s subconscious is triggered – that childhood consciousness comes to the surface and for a moment they feel like a child.”

Creatively satisfying and lucrative though it can be, sand sculpting is not without its dangers. If a big sculpture collapsed, Dennis could be crushed to death by thousands of tonnes of sand.

“A sculpture I created in Denmark was a pair of hands with a mermaid between them,” he says. “The fingers alone weighed 250 kilograms so if they fell on me they would have killed me.”

While some sculptors use cement to strengthen their pieces, Dennis says he’d never spray something into the air he didn’t want to breathe in, and will only spray casein, a milk protein, if he needs to harden a piece in order to climb it while sculpting.

The job has enabled Dennis to raise three children – sons Luke, 33, and Finn, 18, and his daughter, Marley, 13, and support two ex-wives. Around 10 years ago he decided to stop travelling the world to stay close to his family and look after his ailing mother, and nowadays, ventures only as far as Southeast Asia. Still, that’s enough to keep him constantly working, with regular large jobs alternating with smaller projects, like running workshops with kids on Mooloolaba Beach in the holidays.

In September last year he was commissioned to build a sand hotel on the Gold Coast with a five-star luxury bedroom, an eight-bed bunk room, bars, sun decks, lounges and a DJ platform to showcase the area in the lead-up to the Commonwealth Games. In 2013, he built a life-size replica of a Qantas plane complete with pilot and passengers to promote the airline’s return of flights to the Gold Coast, which was unveiled at Circular Quay in Sydney. He was paid $2500 a day to sculpt Arabian forts for a sheikh in Abu Dhabi and spent three weeks in the Gobi Desert in China as part of a team sculpting 100 replicas of global icons like Mount Rushmore, the Great Pyramid of Giza, the Sphinx, the Chinese warriors and the Great Wall of China.

“One of the most satisfying moments for me was working on the Louis Braille bicentennial celebrations in 2009,” he says. “We created braille dots [out of sand] a metre in diameter and a metre high. People who were totally blind could actually participate in making these braille dots, which were photographed from a helicopter and read: ‘braille rocks’.

To help visually impaired people create something beautiful with their hands was a moving experience for Dennis, but not just because it was wonderful to share his passion for sand sculpting with those who wouldn’t normally get such an opportunity. What makes his achievements all the more remarkable is that he is visually impaired himself.

As a child, an accidental acid burn left him completely blind in his right eye. Later, when he was training to be an apprentice carpenter, he copped a tile to his left eye, damaging the retina, though he has maintained partial vision. In 2014, a horrific crash with a drunk driver in Noosa left his entire body shattered, and he has spent the past few years undertaking therapy here and overseas to reach a point where he can say he has fully recovered – at least physically.

He still carries mental and emotional scars from the pain he has endured in his life, and getting his hands into the sand is like balm on the wounds, a healing practice he can’t imagine living without.

“It is a type of meditation,” he says. “It’s something to do with being very tactile. For the first 20 minutes or so you may not be enjoying yourself, but all of a sudden you’ll be lost. The meditation kicks in and you’re at peace.”