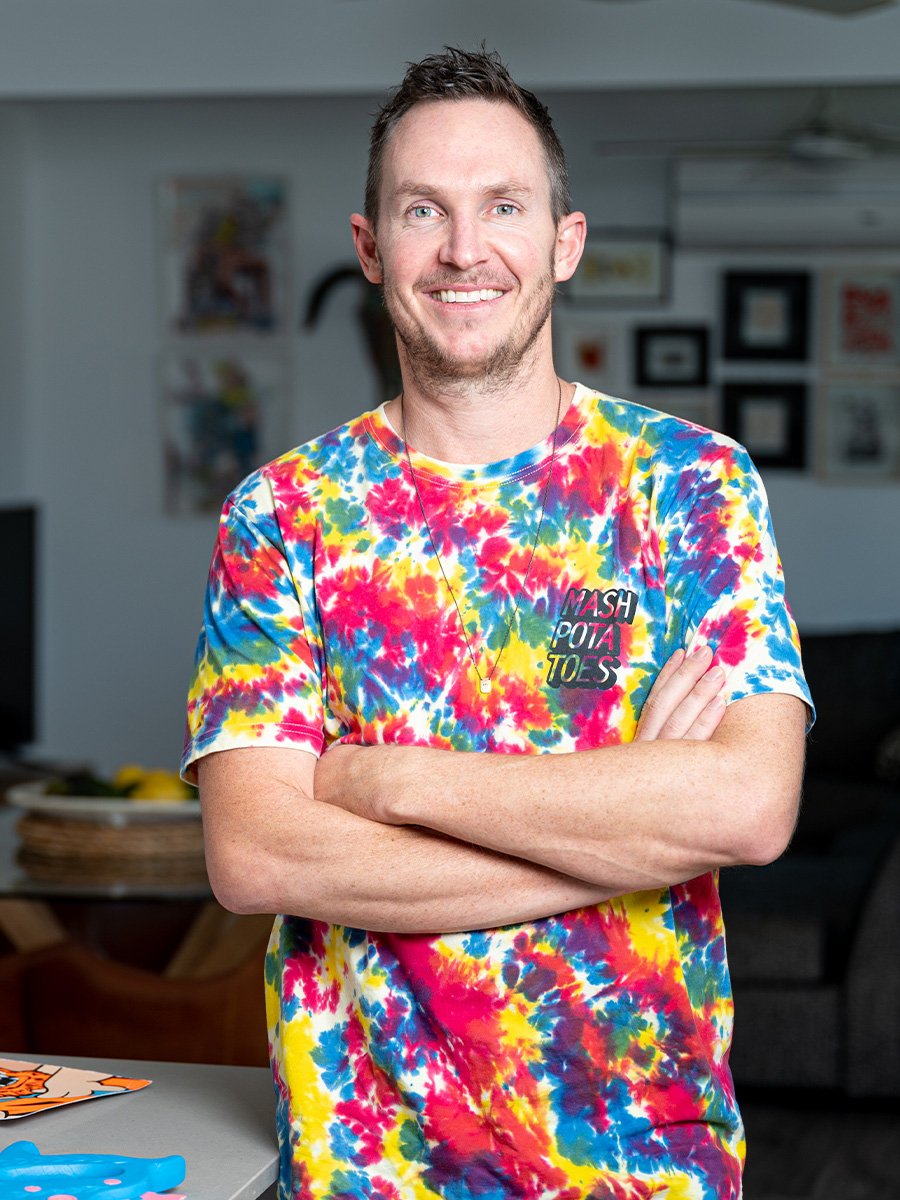 Aaron Craig wanted to be an animator when he grew up. As a young child fascinated by cartoons, it was a trip to the United States that got his heart set on a job with Walt Disney Studios. And although his dreams took on new dimensions, his love of art, characters, nostalgia, colour and bold statements didn’t.

Instead, he simply changed his focus from the cartoons loved by younger children to the more adventurous comics adored by teens. And according to the 37-year-old who grew up in Newcastle, New South Wales, as a teenage boy he really did LOVE comics.

“I found any excuse to be around them,” he says. “I loved animation as a kid, but by the time I hit teenage years I found myself obsessed with comics. I would ride on the train 40 minutes one way to the closest comic book shop and I would just sit there, looking at the comic books. I’d imagine starting my own company, write bios, and I think I designed close to 100 characters.

“I drew them up every day; these cartoon characters and my own creations. I am lucky that my mum is pretty creative too so she definitely encouraged me a lot.”
After he finished high school, Aaron moved to San Diego and then to Canada for a few years.

“A friend of mine was an art teacher living and working over in Canada,” he says. “She gave me a spare canvas and I instantly fell in love with that kind of painting and a different kind of art. So, when I returned to Australia, I studied fine arts at Newcastle University, then finished my degree in Brisbane at Queensland College of Arts,” he says.

Seven years ago, Aaron made the move to Dicky Beach with his wife and two kids, Thor and Rocket. “There’s something special about the Sunshine Coast that I think everyone who lives here understands,” he says. “Being wedged between the ocean and the hinterland is amazing. There is so much to do outdoors, time seems to move a little slower; it’s just the best lifestyle.

“I would actually love to paint some murals on the Coast one day,” he laughs. “And there is something so inspiring about creating here too. For me, it’s that coastal, laidback lifestyle, matched with music, mostly ’90s punk or rap, or meditations and audiobooks – it all helps me get in the zone when I paint.”

It seems that over the years, Aaron’s art has taken as many twists and turns as his brush does on canvas. “My art has certainly been an evolution over a number of years,” he says. “For me, finding my own style was the hardest thing to work out. I discovered that I’m inspired by the stuff I grew up on, so being an ’80s kid, toys and cartoons like Masters of the Universe, TMNT, Marvel Comics, Disney, Warner Bros and Hanna-Barbera cartoons. These were all huge for me and I’ve always had a passion for that, so I suppose my style now is about revisiting a lot of that stuff, because it gives me a hit of nostalgia.

“I do a lot of pop art, and lately I’ve been getting a reputation for putting Sponge Bob’s face onto other characters, so he’s a favourite character to paint and play around with at the moment too.”

Just as his art evolved, so too has Aaron. “Being able to create art for a living is the absolute dream,” he says. “It’s what I’ve always aspired to do, but self-belief and some misdirection have stood in the way until recently.

“I ended up owning an Australian art and art products company called Stupid Krap for about six years, so I’ve always been very involved in the art scene in Australia, but I made the decision to put my own art first and foremost about 18 months ago. It was when I committed 100 per cent that I started to realise how lucky I am, and that my work has been received, and I am absolutely grateful I now get to do it for a living,” he adds.

“I’ve been lucky enough to have my characters turned into soft vinyl art toys with Pobber Toys from Singapore. I currently have two new art toys in production with them. “I’ve painted the TMNT on some Pizza Hut matchbooks for collectors, I’ve painted some vintage sheet music and have plans to paint some more soon. I often paint onto old handsaws, and I have a solo show in Melbourne in October that will be paintings on amateur ham radio cards,” he says.

“I can’t wait to see what else the future holds.”