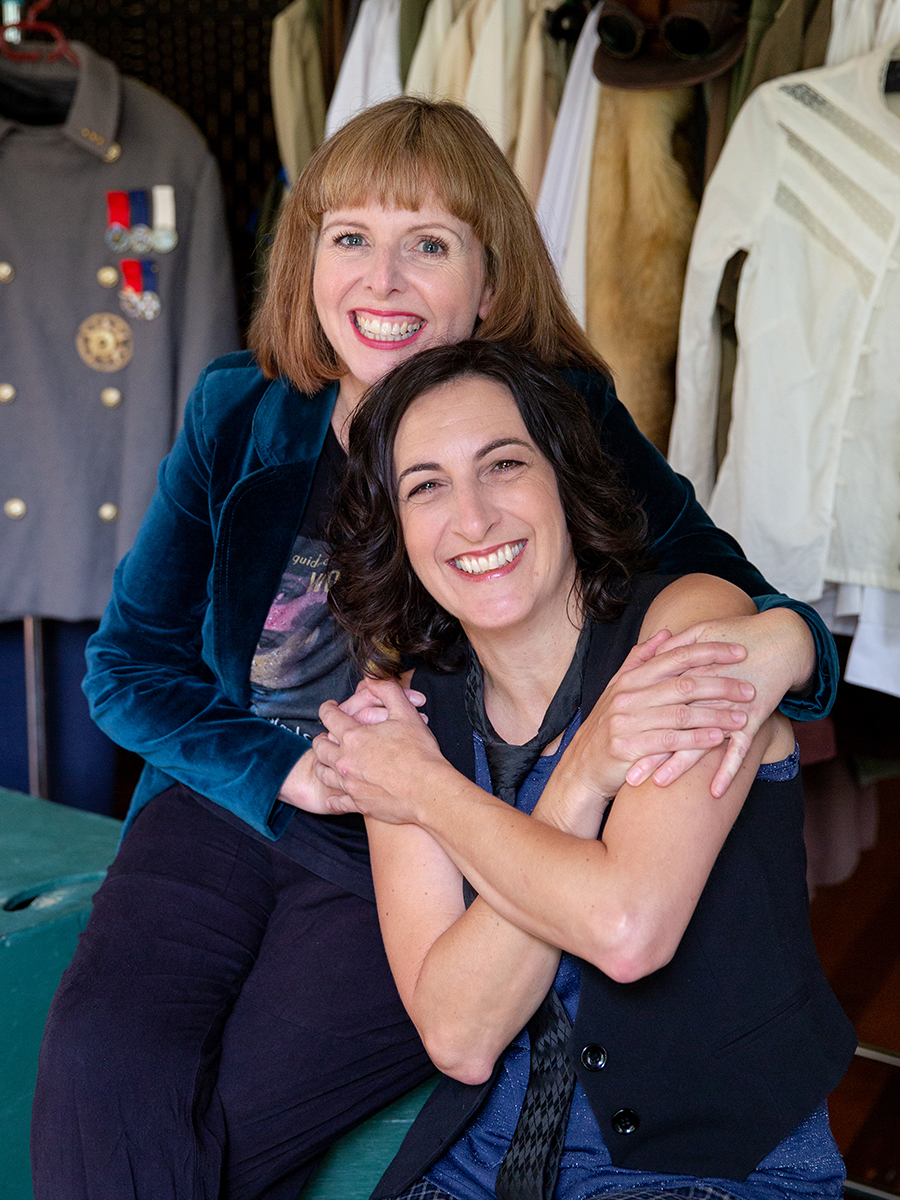 Katy Forde and Aleathea Monsour seem destined to have brought this story to life. It’s a story about women, by women. But it’s also a universal story about the triumph of the human spirit during desperate times. It’s a story of love, friendship, camaraderie, courage and the marvels of medical science. And it’s a story most Australians wouldn’t know about, were it not for Katy and Aleathea’s multi-award-winning musical, A Girl’s Guide to World War.

Partners in life and work, they run a production company, Musical Theatre Australia, from their home in Maleny. While they’ve written and produced several musicals, the most successful to date has been A Girl’s Guide to World War. Katy is the writer and director, while Aleathea is the composer and musical director. Together, they’ve created a truly unique show, one that leaves a lasting impact on audiences. Featuring a cast comprised of actors and musicians from Maleny and Montville, it’s very much a Sunshine Coast production that has been tried and tested here over many years. And it’s now gaining attention further afield.

You could say the story has been brewing since the 1980s, when Katy and Aleathea first met. Growing up in Brisbane, they’ve been friends since the age of eight. Their parents were involved in the long-running repertory theatre group Villanova Players and the two have fond memories of their early years together.

“I remember spending time with Katy was so different to anyone else,” Aleathea says. “I just remember loving every single second. We’d laugh so much.”

“We’d make up ghost stories,” Katy says. “We thought the theatre was haunted. Both of our parents let us stay home from school and Leathy’s mum didn’t believe in Wednesdays.”

“It was exciting,” Aleathea says. “There was never a higher buzz for me as a kid than being involved in a theatre show. And we were so lucky to have that freedom, guidance and support to be able to follow our parents into the theatre industry.”

Now 46, they became a couple when they were 27 and while their relationship initially came as a surprise to friends and family, it made perfect sense to them. Chatting with salt at a Maleny cafe, it’s clear they have a strong bond. They constantly laugh and riff off each other, reminiscing about the theatre shows they took part in as kids and the mischief they got up to at their Catholic girls’ high school. They share a passion for theatre and music, a passion they’ve poured into A Girl’s Guide to World War.

It tells the story of two pioneering Australian women doctors, Dr Agnes Bennett and Dr Lilian Cooper, who ran an all-woman hospital on the Serbian frontlines during WWI. When war broke out in 1914, many women tried to join the army and offer their services as doctors and ambulance drivers, but only nurses were allowed to go to war. Their efforts to sign up were met with suggestions like “go home and cook something”.

To circumvent this, Scottish doctor and suffragette Dr Elsie Inglis raised funds to establish her own hospitals, run entirely by women. The initial funds came from Scotland – hence the name Scottish Women’s Hospitals – however they were staffed by women from England, Wales, Canada, Australia and New Zealand.

Born in Sydney, Dr Bennett had been unable to find work as a doctor in Australia due to the prejudices of the time and left to study at the Edinburgh College of Medicine for Women, established by Dr Inglis. In 1915, she became the first female commissioned officer in the British Army when she demanded she be allowed to work as a medical officer in war hospitals in Cairo. At the request of Dr Inglis, she went on to establish the Bennett Unit on the Serbian front in 1916 to 1917. Serbia accepted a hospital run by women out of sheer desperation.

Dr Bennett ran the hospital so well – even within earshot of enemy fire and under constant threat of air raids – other army hospitals came to copy her methods. In other military hospitals, soldiers would be left on the floor covered in blood and dirt. Unsurprisingly, this would lead to infection and poor recovery rates. Dr Bennett introduced a protocol whereby patients would be immediately washed and given a change of clean clothes, then settled into a clean bed in a fresh tent ward. Wounded soldiers prayed they’d be sent there.

Working alongside Dr Bennett on the Serbian frontline was Dr Cooper, Queensland’s first female doctor and Australia’s first female surgeon. She lived in Brisbane with her partner, Miss Josephine Bedford, and the two were accepted as a couple and were very active on Brisbane’s social scene more than 100 years ago. It was this unusual pairing that first came to the attention of Katy and Aleathea, leading them down a rabbit hole that has seen Katy rewrite the musical multiple times over the past 15 years as more information has come to light.

“Leathy was working at QUT and I went to pick her up,” Katy says. “We were walking down George Street and outside one of the houses was a plaque saying Dr Lilian Cooper lived there in 1893. I thought, oh my gosh, that’s very early for a female doctor to be working in Brisbane. Katy won the Lord Mayor’s Helen Taylor Research Award for Local History to research Dr Cooper’s life, which led to the creation of the musical.

They produced a smaller version, called Cooper and King, in 2007 and have been uncovering diary entries, letters and articles to enrich the story ever since. More awards and three iterations of the show later, it has evolved into a world-class production, featuring live music by the award-winning all-girl blues band Vix and the Slick Chicks. In 2019 it won the Matilda Award for Best New Australian Work.

Aleathea not only composed the music, but she also plays bass in Vix and the Slick Chicks and stars as Dr Bennett, fully inhabiting this mighty character with a heartfelt performance.

“It’s wonderful to play her,” Aleathea says. “I have to say, I love it. She has developed a lot, from the first incarnation of the show, when she was very strict and straightlaced.”

A Girl’s Guide to World War played to sold-out shows and standing ovations at the Powerhouse in Brisbane in February and there are now plans for a regional tour of Queensland, followed by an interstate tour. They also have their sights set on the Edinburgh Festival.

“That would really put it on the world stage,” says Katy. “Edinburgh is a great place to be aiming for because the whole idea of putting women on the frontlines came from Edinburgh. All the Australian lady doctors studied in Edinburgh; it was so ahead of its time. Agnes and Lilian both studied there. We’ve had lady doctors writing us letters saying how important it was. Even now, they will be asked, ‘when are you getting pregnant?’. They say it motivates them to keep going, because it’s such a rich story.

“I am actually really keen to keep pushing it and keep researching it,” Katy adds. “I’m also very keen to turn it into a musical TV show, because there’s so much to the story I wasn’t able to fit in. We’re really pushing into organising the next stage and applying for grants. We’re not in it to make money, but our dream is it becomes a sustainable business for us.”

“In terms of feedback, there is such an appreciation for this story,” Aleathea says. “Everybody who sees the show gets something from it. I feel appreciative of those people who have actually come to see the show and embraced it. It’s all we could hope for, for the audience to have a good time and also to appreciate it on deeper levels; to be inspired. Someone even said, ‘It makes me want to be a better person’. We love doing this show. We’d do it over anything else.”