A local firefighter and artist is inspiring others with his works. 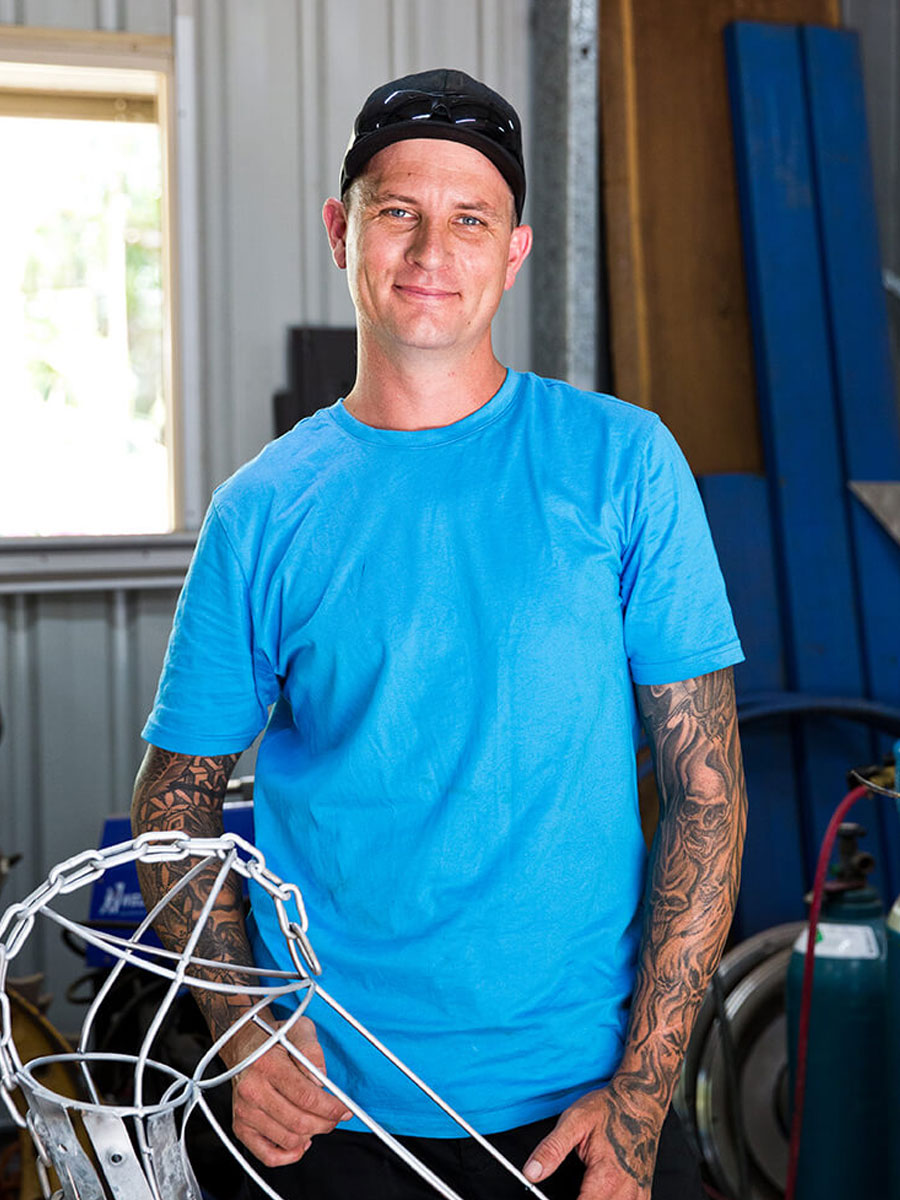 Matthew Mohr pours his heart and soul into his art. In fact, it’s a matter of life or death for him. After becoming an auxiliary firefighter with the Queensland Fire and Emergency Services three years ago, he began to suffer post-traumatic stress disorder and turned to metal art as an emotional outlet.

There’s a lot going on inside his head as he brings the pieces to life. Crocodiles, horses, pelicans and sharks come to life in his Glass House Mountains studio as he sorts through the mental images of the traumas he witnesses on a daily basis.

“There was a night about two years ago where I just couldn’t sleep,” he says. “I had been to a couple of bad jobs, came home and thought, ‘I’ve just got to do something’. I thought I’d try and make something in the shed. The first thing I made was a little rose. I was really happy and it started from there. I made a tuna and as I worked, I started feeling better inside. I thought, ‘this is going to help me with what I do’. Some guys at the station go for a bike ride or go to the gym. Each person has a little niche.”

Matthew grew up in Browns Plains and took on an apprenticeship as a welder and boilermaker after school. But it wasn’t until he joined the emergency services that he thought to turn his trade into an art form. On call around the clock, he can attend anywhere up to 12 jobs in one day, many of them fatal. Constantly being exposed to the worst of human suffering at the age of 36 is a tough call.

“Sometimes you ask yourself about your job choices,” he says. “Why do I do this? There’s good and there’s bad. When we save people that makes up for a lot. But there are sad times when you see people have passed away and it’s not just what you see, but the emotions at the incident. You know family members are around and they are very traumatised.”

He goes into his shed most afternoons after work and buries himself in his art.

“Usually I draw the piece in 2D first with chalk,” he says. “But some days I go to the shed and look at something and think, I could make that into a fish or a bird and I just start going. I don’t really plan anything. I just do whatever comes into my head. I do a lot of pieces for charities like Give Me 5 for Kids and the Cancer Council.”

His incredible, lifelike art pieces are made purely from scrap metal – stainless steel, aluminium, galvanised and mild steels, sourced from local farmers and businesses. A large art piece can comprise thousands of pieces of metal and he welds every single piece, spending hours finding the right piece of metal for the right location on the sculpture.

“It’s hard work. It’s okay to make something 2D, but 3D is really hard. You have to get it symmetrical, you have to find the right size nut for the right size bolt. You have to make things exactly the same on both sides or it doesn’t work. Some pieces I’ve got halfway through and had to cut it up and start again.”

He’s now starting to enter exhibitions and competitions and realising how much people like his work. He sold a crocodile sculpture at his first exhibition, Sculptures on the Edge at Spicers Tamarind, and is now entering as many as he can, with the support and encouragement of his partner, Samantha Lee, who he describes as his rock. She’s been there for him through the PTSD when he’s had trouble thinking or sleeping. He’s not sure how his art helps, but he knows it does.

“People ask me how sculpture helps with PTSD and I can’t really answer that,” he says. “It just makes me feel at ease inside. You’ve got your mind busy and you’re putting what you’re feeling into your work, getting rid of the negative energy. It helps you process things. Some of my jobs take 12 to 14 weeks and that gives you something to look forward to completing.”

Matthew comes across as an altruistic person with a genuine desire to care for others, sometimes at his own expense. Now, having found his perfect therapy, he wants others to experience it for themselves.

“My ultimate plan with this artwork is if I can get enough funds saved, I want to set up a workshop for people with PTSD – firies, ambos – and sit and have a chat and even make something. When you have post-traumatic stress, you feel like you’re battling it alone. If you have somewhere to go where other people are suffering too, it helps.

“I’ve had a lot of comments on Facebook with people saying PTSD is all in your head. Unless you’ve suffered it, you don’t understand it. A lot of people take their lives because they feel they’re alone. If you’re with people going through the same problems you’re going through, you don’t feel alone.

“Nine times out of 10 I’m a really happy person, but sometimes you start thinking about what you’ve seen. To deal with this by yourself would be a very hard process.”