Man with a plan

Photographer Paul Smith is always looking for that perfect shot. 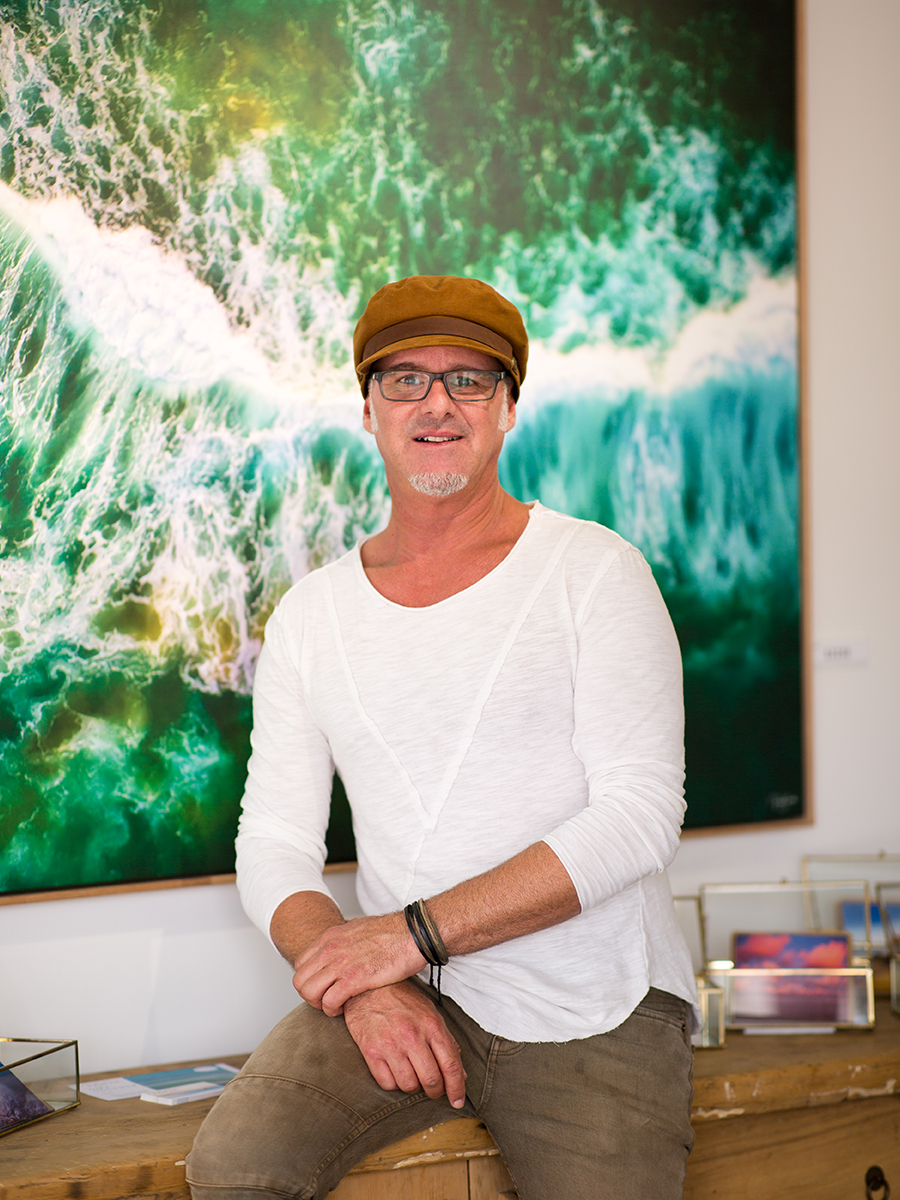 It starts with a cool breeze that ripples across the surface of the ocean before ruffling the beach grasses in the dunes.

Clouds suddenly roll across the sky, hiding the sun which takes the warmth of the day with it. The breeze turns into a wind that picks up grains of sand and whips them against the legs of beachgoers who are now abandoning the shore. The ocean, like a conspiratorial friend, turns dark. The waves pick up and fight against the wind, their combined forces boiling near the shore.

It’s hardly the picture tourist organisations paint of a pleasant day at a Sunshine Coast beach, but these are the days Paul Smith loves.

While you’ll certainly see the postcard-perfect images of Noosa beaches in Paul’s body of work – a surfer caught mid stance, sliding down the face of a wave; the swell rolling in creating perfect parallel lines out to the horizon; a beachside pandanus tree glowing in the late afternoon sun – it’s his moodier work that celebrates crashing waves, dark clouds and afternoon storms that are inspiring the Noosa-based photographer. This is a man who loves the ocean – in all its moods.

And so do others. His landscape, ocean and aerial photographs adorn the walls of his Australian and international customers and he counts Qantas, Tourism Australia, Virgin Airlines and Australian Geographic among his list of clients.

Paul says the Sunshine Coast is a great place to be a landscape photographer – “It’s spectacular.”

It’s easy to fill his Sunshine Beach Road gallery with all things local. “I try to keep the gallery all Noosa,” he says. “I get to show people a different perspective and [in terms of shots] I am always trying to get something new.”

But after living in and shooting around the much-loved tourist destination for 20 years, I’m wondering why he’s not worried about running out of shots. Surely there are only so many different photos you can capture of waves?

“I plan a lot of my shots now, so I keep an eye on the weather, the tide, wind and clouds,” he says. “The light is so important in the shots I do. I really like storms at the moment. The light works really well with storms.”

Paul wasn’t always so concerned about the weather in our region. He grew up in Sydney but it wasn’t the waves of Noosa that called him away – rather it was the snow in Europe where he worked as a skier and snowboarder.

“All up I was in Europe probably for 10 years. I was based in Switzerland. That’s pretty much where I started to learn photography. “We used to do photo shoots over there and had a lot of down time,” he says, adding that he used that down time to ask the photographers lots of questions. “I loved it.”

But his love of photography started earlier than that. “My brother got me a camera when I was a kid. I was always taking photos.”

When he moved back to Australia Paul settled on the Sunshine Coast because his family was all living here. And straight away he got out the camera and started taking photos, which he now sells in his gallery.

While you would think the pressure of running a business would be a burden on creativity, Paul says he really enjoys running the gallery, though he’s had to “learn on the go”. “I’m enjoying that part of it – being in the gallery. Because I can see what people are interested in.”

It’s also a bonus for customers to meet the man who took the photos.

Though you can always be guaranteed some beautiful and moody shots of waves, blue skies and soft sand, Paul is conscious of keeping the work in the gallery fresh – regular customers will always be able to see something new on the walls. “I keep things up to date and keep changing things, otherwise it gets stale.”

And while he has been a professional photographer for years, he still takes his camera outside just for fun. “I really enjoy just going out. It makes you realise where you live and take notice of your surroundings.”

The region offers a contrast to his other subject matter – music photography. Paul has been shooting at gigs and music festivals and doing portrait photography of musicians and singers for close to 20 years. His work has featured in the pages of Rolling Stone magazine for about 15 years. He shoots the musicians in action on stage (he says he wants people who are viewing his images to be able to almost hear the music), and backstage – when we spoke Paul was still trying to catch up on the sleep he’d missed out on at Byron Bay’s Bluesfest. The list of famous faces in his portfolio is long and includes Pearl Jam, Coldplay, Oasis, Florence & The Machine and Bob Dylan. “I’m lucky in that way that I get to cover a lot [of subjects],” he says.

While he loves what he does and has accumulated an enviable body of work, Paul says he is always trying to push himself further to get a different angle, a different mood, a different light. This, he says, is all in the planning – going out at the right time, in the right weather.

His aim is to produce art from each photo – using the clouds, light and movement as his brushstrokes. His work is so much more than a photo of a beach. And that’s just how his customers and clients like it.