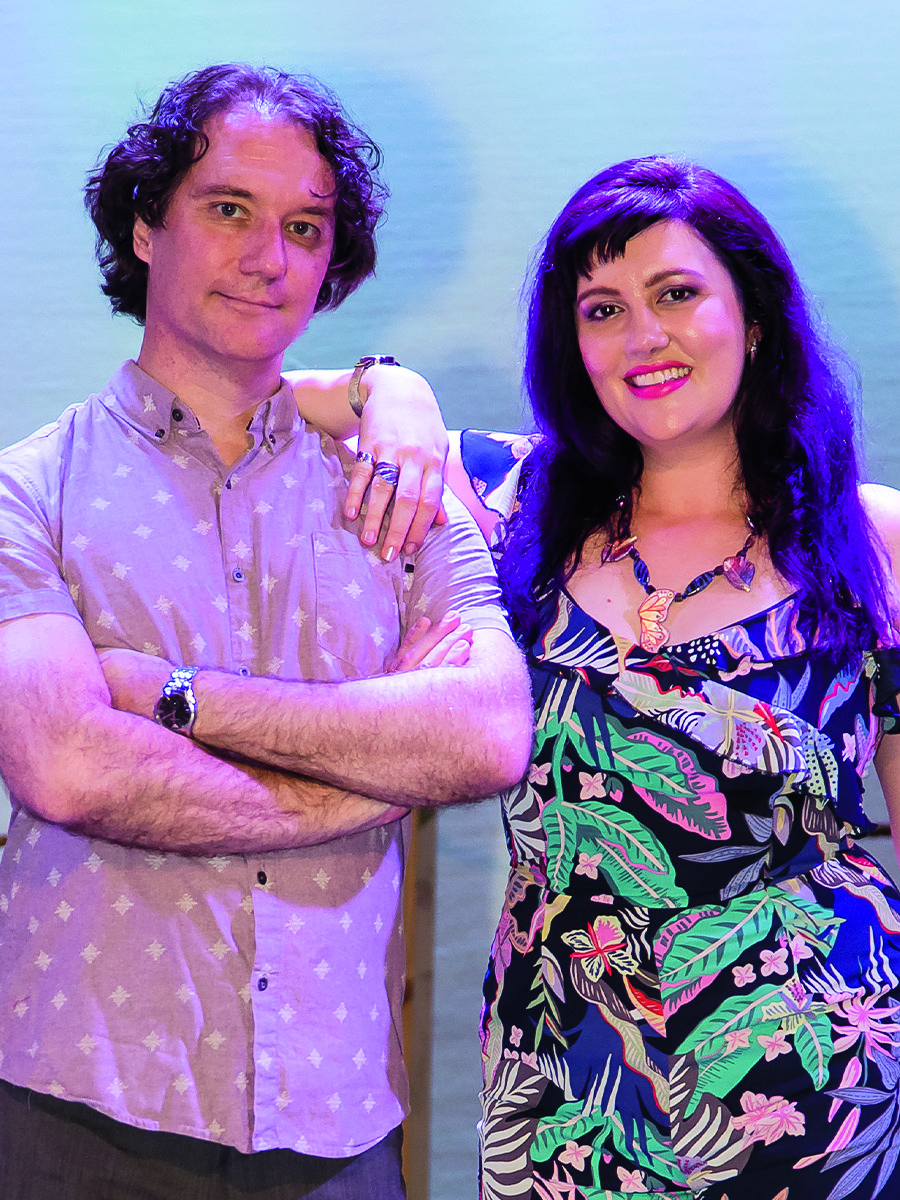 Actors Rachel Fentiman and Howard Tampling are no strangers to drama, and it hasn’t been limited to the stage. They met in the theatre almost 20 years ago on a production of Dangerous Liaisons and became friends, then spouses and, more recently, business partners. As the new owners of Maverick Musicals and Plays – Australia’s longest-running theatre publishing company – the Maleny couple works with schools, theatres and drama groups worldwide. But when they bought the business in February 2020, the timing couldn’t have been worse.

The day after they sealed the deal, the stock market crashed as COVID swept the world and the theatre industry ground to a sudden halt. Schools and theatres closed and the last thing anyone was thinking about was their next stage production. Rachel and Howie were the proud owners of more than 200 plays and musicals and no one was buying.

With vaccines now being rolled out and COVID restrictions beginning to ease, Rachel and Howie are hoping 2021 will be the year Maverick soars to new heights. Wisely, they’ve used the downtime to revamp the website – which contains a variety of plays and musicals complete with scripts, scores, rehearsal MP3s, performance MP3s, band parts and piano vocal scores – and are having a few of the outdated works re-written for modern sensibilities. Running the business from their home office in Maleny overlooking the Glass House Mountains, they have more than 70 writers and composers from around the world on their books and with the school year underway, enquiries are beginning to roll in.

“Maverick is my dream job,” says Rachel. “It’s really interesting being involved in the embryonic stage of theatre, where people are thinking about what production they can do. It’s really nice having email or phone contact with people around the world. I can read the script they’re interested in and then tell them, ‘I really love this character; she’s really fiery’. We can tell them whether or not it’s a good fit for their group and say, ‘how about this one instead’.”

A quick glance at the reviews page of the website reveals positive feedback from schools and drama groups across Australia, New Zealand, the UK, the US, Africa and China. They also have clients in Thailand, Dubai and Singapore.

“We want to branch out and become more international,” says Rachel. “The world has become very small thanks to the internet and because Maverick is 100 per cent digital, it’s so easy for us to sell overseas and people don’t have to wait for a big cargo of scripts to arrive.”

That’s how it was done when Maverick was founded by well-known Maleny theatre family the Denvers in 1979. Renowned playwright and director Simon Denver mentored Rachel from the age of 12. A shy girl, her parents encouraged her to join Maleny Players and she found her calling.

“I was given one line in a Simon Denver production called Henry and Jo Denver, his mum, was the director. Since then the Denvers have been my theatre family. Hearing my voice for the first time, even though I was portraying a character, I was like, ‘Ha! That’s who I am, I’m not shy at all’. I just hadn’t found my voice yet. The shyness completely disappeared. Whenever I see parents battling with shy children or kids struggling with things like anger management, I say ‘have you tried joining the youth theatre?’ It transforms kids, gives them discipline, yet also gives them a freedom to discover who they are. It’s cool.”

Rachel has been with Simon Denver’s pro-am group the Suncoast Repertory Theatre since she graduated high school. Howie, who grew up in Toowoomba, started out on sound and lighting with Toowoomba Repertory Theatre, before moving into acting. During our conversation, the two bounce off each other in an elegant quickstep of witty tales of times past in the theatre, falling hilariously into character, song and silliness with the ease of two best friends. Rachel estimates she has performed in about 70 productions (30 of them with Howie) and says Noosa Arts Theatre is her favourite place to perform.

“In the early 2000s I did Macbeth at Noosa Arts and since then it has been my favourite theatre on the Coast,” she says. “I just love it. It has all the mod cons but the history as well. You walk in and you can get a feel for all the past and present creativity going on, a feel for all the fantastic shows that have happened, especially when you walk into the props room.”

The couple is currently considering the iconic roles of Eliza Doolittle and Henry Higgins in Noosa Arts Theatre’s October production of the much-loved classic Pygmalion. While most of their time is spent on Maverick, they rarely miss an opportunity to do what they both love most – tread the boards together. After all, it was when Rachel played the ingénue and Howie played the romantic love interest in Dangerous Liaisons in 2002 that they met and fell in love. They have had a shared desire to live rich, creative lives ever since, made all the more potent after narrowly escaping death in a horrific car crash in 2011. Both sustained critical injuries and were rushed to hospital.

“I bought a vintage Mazda MX5 from New South Wales and we were driving it home, following my parents,” Rachel says. “We were in Gatton, heading to Toowoomba to visit Howie’s dad. A lady pulled right out in front of us on the highway. We were both going 100 kilometres an hour and we had a head-on collision. I died for 50 seconds. My sternum cracked all the way through and I had a severe head injury. It took me four years to fully recover and even today, the smell of hot metal brings back memories.”

“I woke up in hospital and it just seemed so unreal,” says Howie. “I had severe abdominal injuries that were potentially fatal, broken ribs, a broken foot… but I have no leftover trauma thanks to my life with Rachel. She’s hilarious and great to work with. She’s quite a wonderful person. We agreed that we don’t want to be those people who still talk about it. Happiness is a choice, is it not?”
If they learnt anything from the accident, it was to make every day count.

“It made me realise that life is too short to live in a grind that you don’t enjoy and that also doesn’t give you purpose,” says Rachel. “It’s so important to have a purpose and feel as though you’re contributing to the community, whether your local community or global community. So I started looking for other things and found clay sculpting, jewellery making, I started singing more just for fun and saying yes to everything for the theatre. And of course when Maverick became available, I jumped at the opportunity. I want to be doing something creative at all times. Doing theatre and entertaining people and making them laugh, that’s my contribution.

“I love theatre because you’re looking at a human in real time, instead of a pixelated human,” she adds. “You get to see first-hand months and months of work for that particular piece of art, but you may also be looking at decades of experience on the stage.

“It’s multi-sensory. You can smell the fear of the actors, especially when you sit in the front row! You get to notice the reactions of your fellow audience members too and if you’re a newcomer to the theatre, you might not realise it’s okay to guffaw and have a big belly laugh. The actors love that and then they know they’re on the right track.

“There’s a sense of connection. You’re all laughing together, all gasping in shock together, or crying together. After a show, as an audience member you may come out into the foyer and make eye contact with a fellow audience member and you share a connection because you just went on a journey together simultaneously and it’s really special.”