The shrill sound of a grinder on metal cuts across vast acres of bushland as thousands of pieces of steel are shaped into small curves and fitted together with absolute precision. 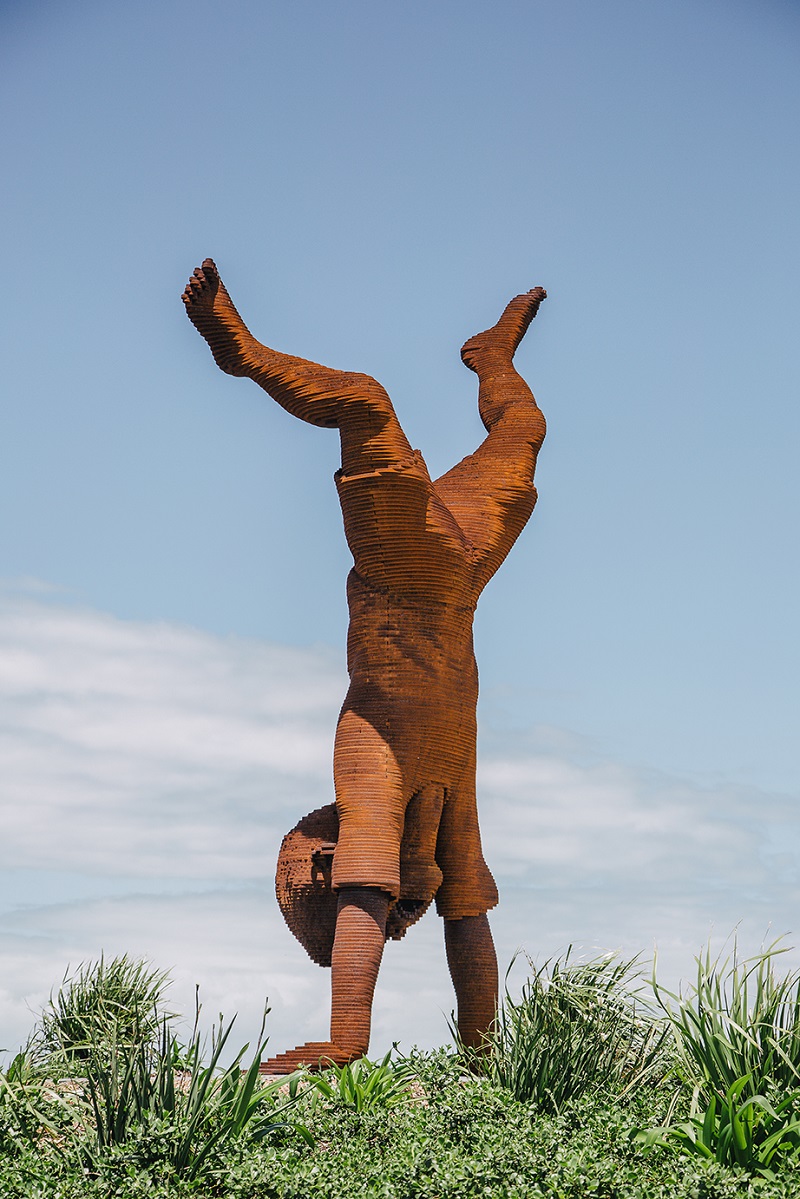 The shrill sound of a grinder on metal cuts across vast acres of bushland as thousands of pieces of steel are shaped into small curves and fitted together with absolute precision. A creative idea is coming to life, born in the mind of an artist, honed by CAD software and transformed into a stunning piece of public art.

Russell Anderson, a kinetic sculpture artist with a whimsical aesthetic, has his nose to the grindstone – literally. He’s rising at 2am every day and working until 5pm at his Witta studio to meet a looming deadline, a piece called The Unfurling, designed in conjunction with his wife Rebecca Ward and commissioned as part of the revitalisation of Timari Street in Pacific Paradise.

Russell and Rebecca, who are both artists, live with their daughters Ren and Rata on a secluded 30-acre nature reserve in the Maleny National Park. The family lives in harmony with nature and entirely off the grid, running their home, Russell’s workshop and their car on solar power.

The piece he’s currently working on doesn’t look like much now, but upon completion it will be remarkable, a thing of beauty to inspire, delight and evoke curiosity in its viewers, as he believes all public art should.

At least, that’s the response he’s hoping for, but he’s still feeling a little gun-shy after the backlash he received over his best-known work, the six-metre-tall, eight-tonne steel sculpture of a child doing a handstand installed at Oceanside in July.

The piece, called iDIDIT! stretches skyward on a hill near the Sunshine Coast University Hospital, evoking a feeling of youthful joy and exuberance. Russell won the commission ahead of national and international artists and was paid $200,000 by the developer Stockland – not the Sunshine Coast Council as was widely assumed. The response was overwhelmingly positive. Then a TV news story that mentioned how much Russell was paid prompted a social media backlash over the ‘waste of taxpayers’ money’.

“It put me off doing art,” Russell says. “It gutted me. I put everything into it and it got to me. I was thinking, I can’t comprehend I’ve built this with that amount of money. Most of the cost was materials, the steel, the cutting and the labour to weld it. It’s Australian steel, too – I could have bought it from China, but you don’t know what you’re getting.

“People I know jumped on Facebook and tried to tell people the facts, but I didn’t want to engage with people. I thought, this is my personal life. I don’t want to be attacked for something I worked hard for. I’d just built the best thing I’d ever built and everyone involved, Stockland and the people at the Sunshine Coast Council, everyone worked hard at their jobs to get it built, it wasn’t just me.”

The piece took Russell eight months to complete, with three months alone of CAD drawing. It comprises about 250 layers of custom-made BlueScope weathering steel – a type of steel that forms a rust-like appearance which protects it from corrosion and eliminates the need for painting.

“Every layer was hand-drawn and cut into about a thousand pieces that had to interconnect – there was no ‘oopsy-daisy’, I only got one go at it. There were in excess of six thousand holes and bolts to hold the pieces together. It was a weird shape too – there was a wiggly shirt and wiggly hair. You have to go where the CAD says to put it – it was about trusting I’d designed it correctly. I’d never done anything like it before.

“If I’d been paid an hourly wage it would have worked out to about $10 or less,” he says. “It may seem like it cost a lot of money, but as far as artwork goes, that’s not even up there at all. Although it was paid for privately and not with taxpayers’ money, I didn’t want to focus on that because a lot of my work is paid for by the government and I didn’t want to say it’s not justified if it’s public money.”

A public artist for the past 20 years, Russell knew as a schoolboy growing up in Gympie with a fascination for robots and technology that art and design were his forte. He often pulled his toys apart to see how they worked and inadvertently destroyed them. He sees it now as reverse engineering, enquiry rather than destruction.

Once at university he quickly found his groove, completing an honours degree in visual arts and a masters degree in Fine Arts at QUT.

“I liked to do kinetic art and learnt to weld in my first year at university,” he says. “I learnt to weld by accident. First I was a wood carver, then slowly metal got introduced, then there was no wood just metal and then I started making machines.”

A wicked 1970s pinball machine in perfect working order and a collection of classic robots like Astro Boy, along with vintage fans and old toasters decorate Russell’s office; artefacts that combine technology and design to form things of beauty and wonder. Colourful posters depicting his trademark steampunk installations adorn the walls.

Russell was into steampunk before it even had a name and his eccentric pieces – such as the Noosa Town Clock and Maryborough Match Making Machine ­­– which tells you if you should get married or not – are dotted around the country. They are brilliant designs with elaborate invented histories that reveal his quirky sense of humour.

Then there’s the Apparatus for Transtemporal Occurrence of Impending Space in Melbourne’s Docklands ­– a contraption supposedly invented in the 19th century to see into the future that became permanently jammed on a fictional vision of Melbourne in the 1930s. Viewers can look inside a porthole and see a dieselpunk future with suspended tram cars, dirigibles and grand art deco architecture, which of course never materialised because it’s all from Russell’s wacky imagination.

“I always wanted to make absurd machinery and I still do that,” he says. “When you drill down into it, that’s what my steampunk stuff is – alternate histories.”

In 2014, he installed a piece in Beerwah called Apparatus for Expedient Market Deployment (Ananas Comosus) and attached a nutty story to it that some locals took him to task over, questioning its veracity.

“The story behind it was that it picks pineapples and teleports them to market,” he says, “The inventor was called Speedy Joseph King and he dominated the Beerwah pineapple business in the years between 1931 and 1957.”

As the story goes, no one knew how Speedy Joe could work his farm alone and never hire any pickers, but always be first to market. It wasn’t until the 1970s that his farm was auctioned off and his secret was discovered – his sheds were filled with bizarre machines that could teletransport matter.

“All these machines I make, I attach stories that are quite absurd, but I do it in a deadpan way so people think it’s real,” he says. “I was almost getting abused for that machine in Beerwah, but the local councillor really got it. It’s an interesting thing to question, what’s real and what isn’t real.”

A fast-talking, high-energy man with a mischievous boy inside, Russell says it’s the story behind what he does that makes his work relevant and accessible. “The story is very important. Sculptures without context are meaningless. Context is paramount, in fact. They wouldn’t be successful if they didn’t have the imagination behind them – they would just be abstract machines. Not everyone is into sci-fi and they need a story and a relationship.

“My thing is, I’m not trying to be serious. The boy [at Oceanside] has a bit of a serious message underneath it all about rehabilitation, but it’s meant to be fun and joyous. I’m not trying to offend people and I’m not political in any way.  That’s my thing about public art – I’m trying to lighten things up a bit. Aesthetics are important of course, and workmanship. It needs to be well built.

“Some people may appreciate art and know how to articulate it and some don’t. My work is in the public realm and I am aware of that. I’ve been educated in art but my viewers haven’t, necessarily, and I like work in the public realm to be accessible, so people don’t need a degree to understand it.

“The boy is very accessible and that’s really important to me. People can relate to a human form really quickly and to children. You have a memory of doing a handstand and you relate to it instantly. I’ve not really done figurative work like that as a rule and it meets my criteria – the whimsy, the playfulness – there’s so much I can do in that world. It’s such an untapped arena.”