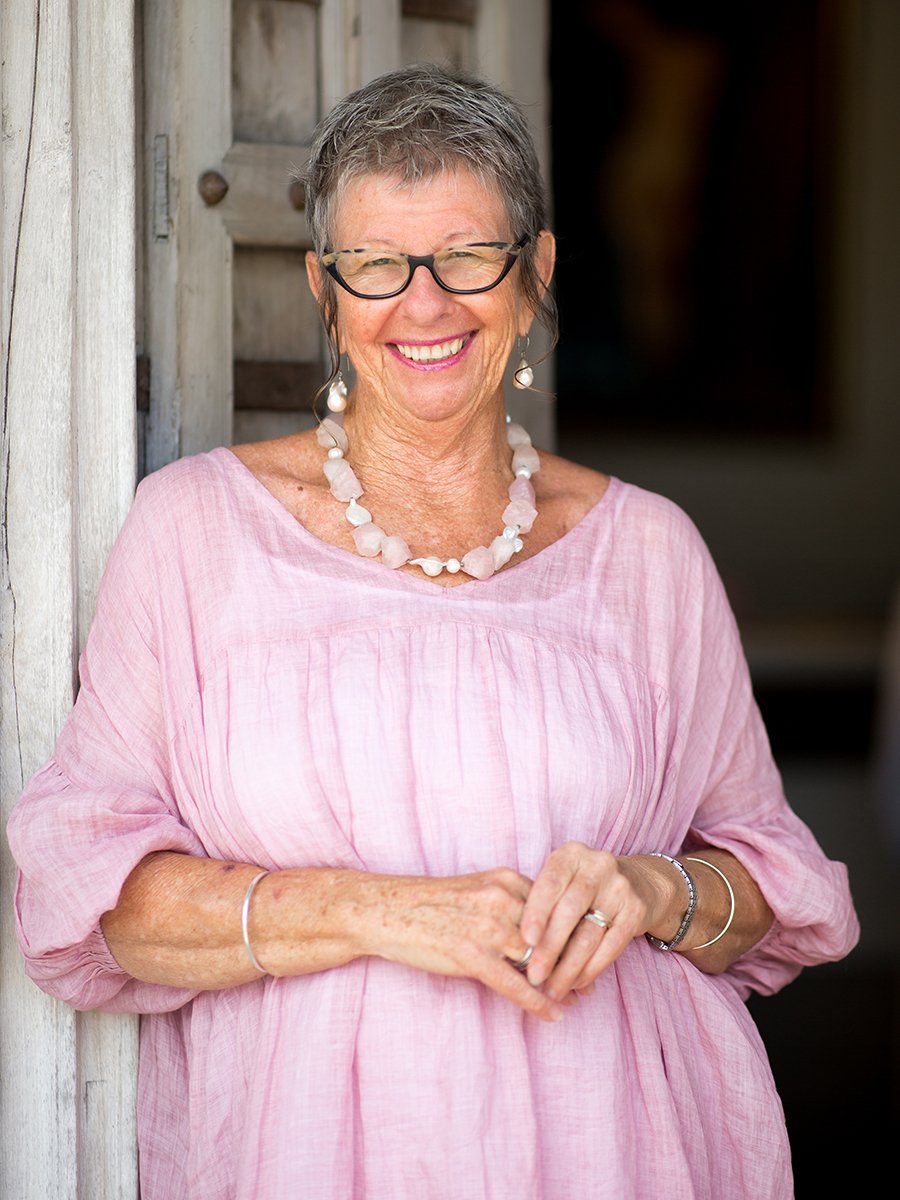 Cherilyn Hewish remembers pricking her finger on a needle when she was about seven years old, making dolls’ clothes on her toy sewing machine.

Luckily, that slight mishap didn’t put her off – in fact, it was barely a tiny hitch at the beginning of what would become a stellar career in design, which includes her own fashion label, stores, factory, and customers from around the world.

Zephyr, the Noosa-based fashion label now synonymous with classic and elegant lounge wear, is Cherilyn’s labour of love that officially began about 26 years ago, but was written in her stars long before that.

She grew up on a farm in the Queensland country town of Goondiwindi, where her dad was a station hand and her family was, in her own words “quite poor”. An unlikely setting, perhaps, for a budding designer, yet Cherilyn, inspired by a stylish aunt who taught her how to sew, was seemingly born with a love of French fashion and an attraction to natural fibres.

“For me, it’s definitely innate,” she says. “I was always dressing a little bit ‘on the edge’ in Goondiwindi; I was always trying to find something different. I made a lot of my clothes, and I used to do a little bit of modelling.

“All my life, I’ve loved clothes. And I think, possibly, having a poor upbringing meant rather than going to the shop and buying them, I had to create them. So, out of that little bit of adversity came a fairly strong person who wanted to do her own thing.”

After trying out “a few little careers” such as transforming op-shop fabric to clothing and selling it at the markets, she created a small range of linen bedsheets and mosquito nets and made her way to the Eumundi Markets 26 years ago.

Six months later, she couldn’t keep up with the demand and began employing people to sew for her. That little enterprise became the extremely successful Noosa Nets & Bed Linen (which is still a part of Cherilyn’s business today).

Wearing clothes she had made herself, she was constantly being asked if her designs were for sale. Finally, she obliged those requests, and Zephyr was born. A permanent store at the Eumundi Markets now supplements the label’s Noosaville headquarters.

Zephyr has a “huge international following” today, with customers from the United States, New Zealand and Europe, as well as from all over Australia. With social media also now firmly in the mix, Zephyr’s customer base is continually growing.

“Feminine” is the word Cherilyn uses to describe her style philosophy that forms the range, which is aimed at more mature women – a demographic she believes is often overlooked when it comes to fashion.

“I’m not designing clothes for 18-year-old girls – there’s loads of clothes out there for them,” she says. “It’s the women from 30 to 100 that we target. I’m 62, and I’m not invisible. I still want to look a bit funky and sexy too. I think there’s a huge hole in the market there.

“We don’t want to be ‘mutton dressed up as lamb’, and we don’t want to look like old ladies. Trying to find something in the middle seems to be what I’m good at.”

Linen is Zephyr’s trademark fabric, with its origins in the Netherlands from an organic flax. That is then shipped to China, where the fabric is manufactured and then imported by Cherilyn in its raw state. The cutting and sewing is done both at the Noosaville base, as well as in Zephyr’s factory in Vietnam, which was established 14 years ago.

“The main reason I’m in Vietnam is because of the quality of the seamstresses,” she says. “One of my lead girls there was trained by a Parisienne designer.”

She also praises the talents of her Australian team – yet Cherilyn also remains extremely hands-on in the business. Although she no longer has time to sew, she can be regularly found out the back doing the cutting.

Most Saturdays, you’ll find her at the Eumundi Markets store, and at least on a couple of days through the week, in the Noosaville shop, connecting with her customers. “I love my customers and I’m very in tune with them,” she says. “They’re my inspiration really, because I’m trying to always listen to what they want, and trying to fulfil that.”

As for the future, there’s a promise of plenty more to come, with a strong hint from Cherilyn about a new lingerie range in Zephyr’s pipeline. “All I want to do is keep on doing what I do, and just improve on it, and keep on getting better and better at it,” she says.

“Since I was a small girl, I’ve been buying pieces of fabric. Now, I get to buy a lot of fabric. So it’s kind of like a dream come true.”