Artist Kyarna's latest work is heading in a new direction. She's getting hands on - literally! 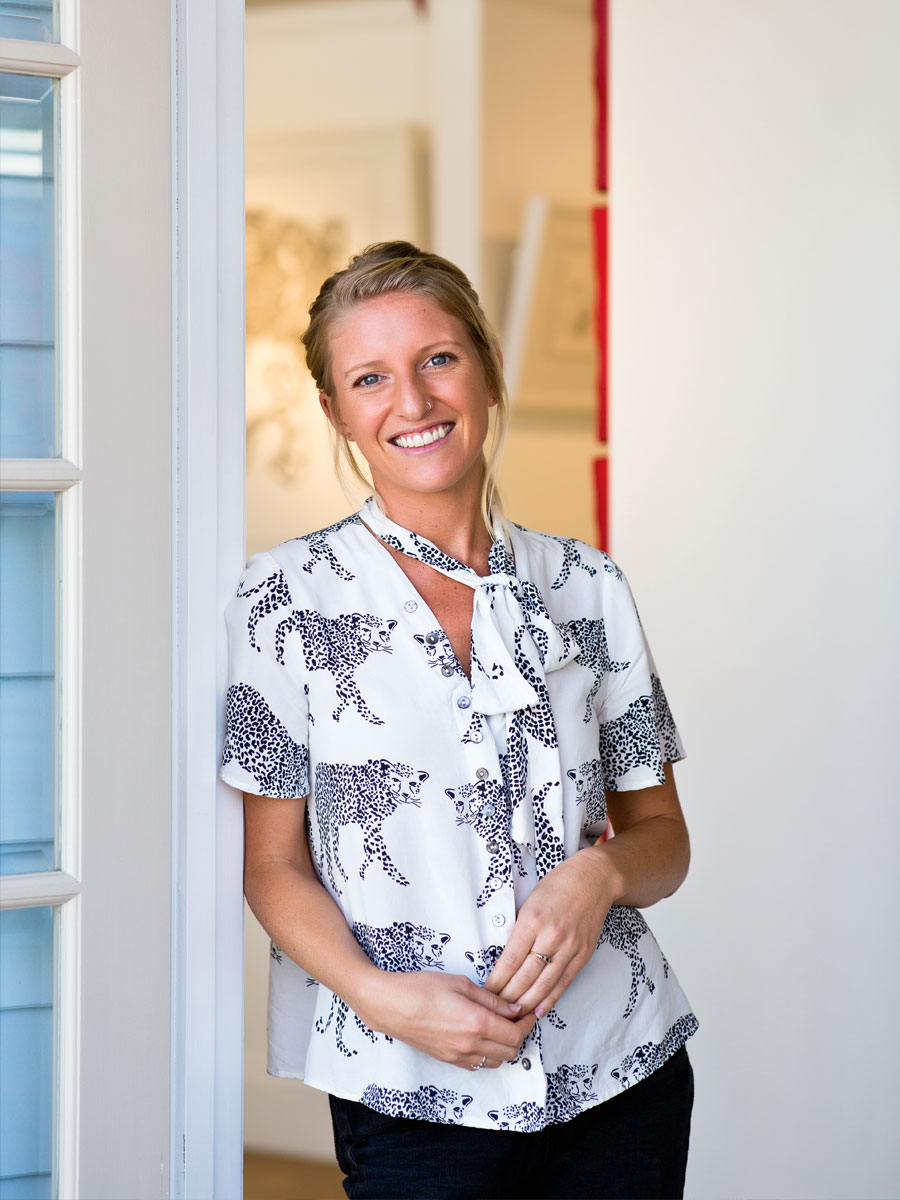 Artist Kyarna’s body of work is so diverse it’s almost impossible to predict what she will create next. And no one is more surprised than the artist herself – whose intricate, fine-lined ink and pencil creations are so unplanned she never quite knows what the result will be until she lifts her hand from the paper.

“I usually have a bit of an idea and I’ll do a basic pencil sketch on the paper,” Kyarna says. “Then I’ll just get the pens and go from there. It all sort of just comes out; it turns into this thing that’s in my head. I don’t plan and I don’t measure the page – I know a lot of people measure the page – but I just sort of do it.”

Sunshine Coast born and bred, Kyarna lives and breathes art, dividing her time between her drawing and her “dream job” at Holloway Gallery in Moffat Beach.

“I’ve always drawn, since I could hold a pencil,” she says. “I did a bit of art study after school, but I didn’t finish that. I came away with a few techniques and different things, but at the end of the day I think I’ve always been a drawer, not much of a painter or anything else. It wasn’t for me; it does put you in a bit of a box.”

But art was in her blood, it seems, with contributions from both sides of her family.

“My dad works with wood. He’s very creative with timber and my grandpa was an amazing painter. Mum’s side is also full of drawing and painting. So it’s trickled down.”

“Very encouraged” by her family, Kyarna kept drawing. Now, her work is held in private collections around the country, and she has exhibited in Melbourne and Sydney. Her latest collection will feature in an exhibition at Holloway Gallery.

Her work to date has been surrealistic in style – faces, figures, and creatures with mythical, otherworldly elements. Extensive cross-hatching – a mesh-like pattern of fine lines crossing over each other to create shading – has also been a feature of her drawings.

Take, for example, her series featuring Indian-style headdresses – one of them atop the head of a giant lion. So detailed and photographic in their likeness, they exude a 3D quality.

“I went through a bit of a phase of being obsessed with Indian headdresses,” she says. “I just love them. I think they’re gorgeous. I did a bit of research and found out there’s all these different types of headdress, and they all mean different things.”

Then, there is The Elephant in the Room, a large drawing featuring an elephant mandala – scooping up bright yellow bananas with its trunk.

“I decided it was too serious and it needed something more fun in it,” says Kyarna of her creation. “So I added the Andy Warhol pop art bananas.”

True to her ever-evolving style, however, Kyarna’s latest body of work moves away from the surrealism she is so well known for and takes on a more realistic bent.

“I’m doing a series of hand gestures – realistic hands – at the moment,” she says. “Some are going to be a little bit cheeky. I’m doing a huge one – about one metre square – that’s two hands holding. It’s probably a little bit more emotional than the little ones, which are a lot of fun.

“I have a fascination with hands for some reason – I did a series of other hand gestures not long ago. I think they’re fun and you can take out of it what you want.”

The new drawings are no less detailed, however. In fact, they are even more so – much to Kyarna’s delight.

“My style that I’m evolving to now, instead of cross-hatching for the shading, is called stippling – using all the little dots. It’s just become so much more detailed than what it was, which I’m excited about.”

Not only are her subjects seemingly unpredictable, but so are the moments they choose to present themselves as inspiration. “Something will just pop in my head and I have to draw it,” she says. “It can be really frustrating. You’ve just got to get it out. You’re in the middle of something else and you think ‘that would be a great picture, I’ve just got to get a bit of it out’.”

Although Kyarna’s living room is also her home art studio, where a “huge drawing board that takes up a fair bit of room” is centre stage, she also likes to take some paper, a small board and a few pens to the beach, where she indulges in one of her favourite pastimes – people watching.

People’s faces are one of her largest sources of inspiration, she says, although anything is fair game. “Everything influences me, from patterns on fabric – those beautiful silk fabrics that have got those nice patterns on them – to people’s faces, to other artists.”

Even food can ignite Kyarna’s creative spark, as it did for Squid Ink – a giant drawing of a beautiful, Bohemian-style woman clad in flowing robes, rising from the waves, surrounded by huge tentacles and looking serenely through a monster telescope.

“I went over to Spain, and I was eating a lot of Galician octopus, which is one of the dishes over there that is delicious,” she says. “I came back and started drawing all these tentacles, and I thought ‘oh that must be where it came from’. The woman is just made up; but a lot of the Spanish clothes are highly colourful and patterned, so I think I must have taken a bit of that as well.”

Despite having “no plans” for what she will draw next, there is no doubt that Kyarna’s extraordinary works of art will keep materialising for as long as she continues to hold her pen.

“It can happen whenever – any time,” she says. “I’ve always got a paper and pen [with me]. It’s more like a meditation for me – I just like drawing.”