Born to be wild 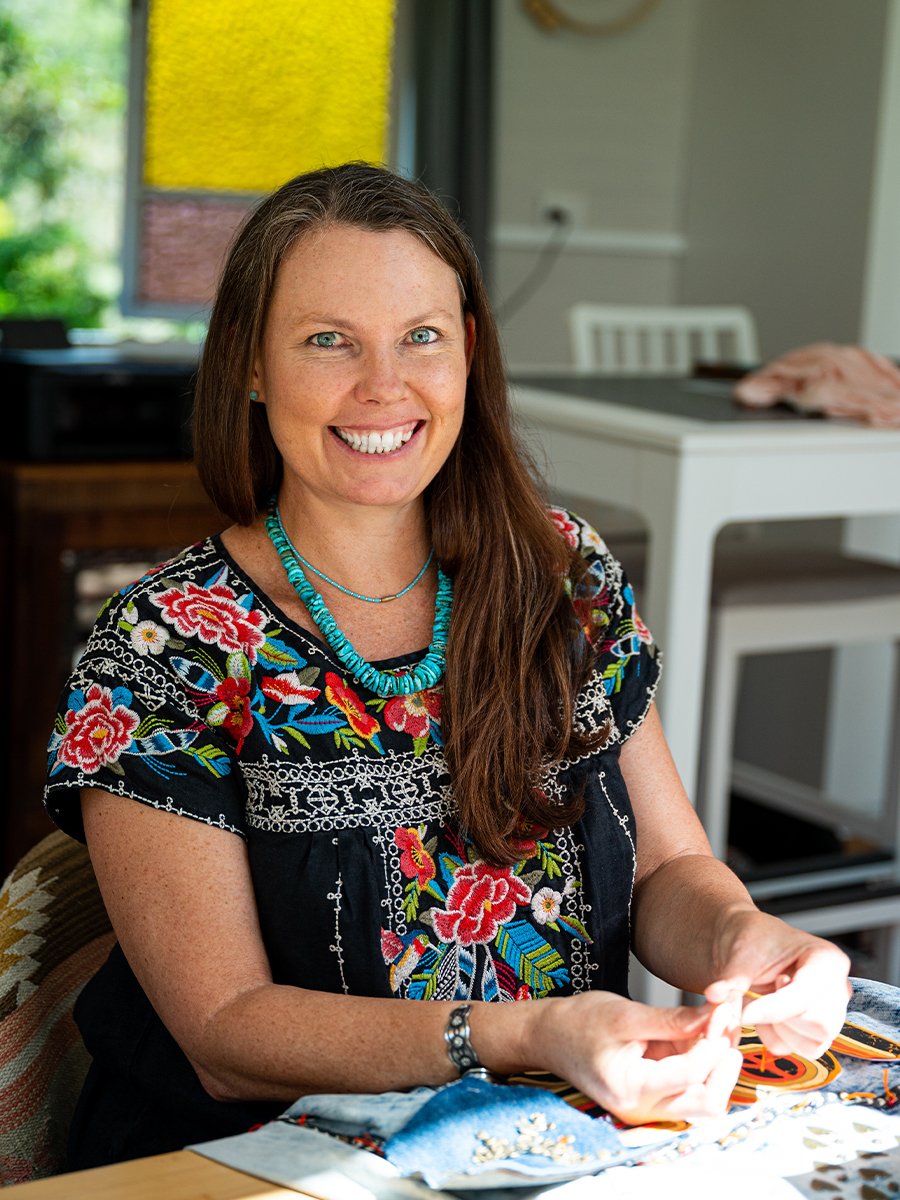 You can see it in Zoe’s eyes – the passion, the love of her craft. And if you miss the sparkle there, you catch it in her smile for sure.

In fact, it was clear from the moment we arrived at her studio, tucked away in the Noosa hinterland, that she loves what she does. And after spending most of the morning losing time and chatting away in the studio her husband built for her, I have to admit, I fell a little bit in love with her craft too.

Zoe Kennedy launched Eumundi’s beloved Agave Blue in 2014, after a lifelong obsession with Western boots. But after COVID hit, she decided it was time to “play again” and get back to her roots in textiles.

“I just wanted to find a happy place amongst the chaos and uncertainty,” Zoe says. “When COVID hit, there weren’t many people around to come into the shop, so I picked up some embroidery cotton and started playing. It was beautiful just living outside the box and getting back to my childlike self, creating and having some fun with it.”

That is how Butler Rd came to be.

“I started embroidering on denim jackets for fun, and then two women came into the shop, saw them and they were sold before I even had a chance to finish them,” Zoe says. “I knew there was something there and ran with it.”

In fact, Zoe was so inspired by this she decided to put Agave Blue up for sale and begin her journey down a new, exciting pathway. “The jackets are picked up from various places. I have about 40 hanging in the studio now waiting to be adorned and turned into art,” she says. “They are all chosen based on them having some weird point of difference – quirkiness, colour, quality.

“The work and the love that goes into making every single one is immense, but I wouldn’t change a thing about it. I guess it just means there is no one type of client, or no average time frame to complete each one because everything is unique, one-of-a-kind and it’s my mojo too – I’m either in flow or I’m not as I work with my heart and soul.

“I recently finished one custom jacket that took 12 weeks and over 400 hours. It had thousands of French knots and because I learn as I go, I ended up getting so overwhelmed as to how I would do this piece justice.

“The trick is just to ‘fake it till you make it’, get out of your own head and just start,” she says. “And the end result was just magic.

If you had asked Zoe when she was a child what she wanted to be, she would have told you “a fashion designer”. Funnily enough, that answer hasn’t changed.

“I like to live outside of the box, because I don’t really see things as they are; I see them as they could be,” she says. “And I have loved playing with and creating with textiles my whole life, for as long as I can remember, so now I feel as though I am being intrinsically drawn back to my roots and I’m just letting my dreams become a reality.

“When I was little, about four years old, I would visit my granny and she was a milliner. We would go to Coles together, get waffles and ice-cream with caramel topping and then go through the shops to find a little dress I liked. Then, we would go and buy some very luxe fabric, catch the bus home, and Granny would draft up a pattern, and start creating. I would run around the studio annoying the crap out of her and an hour later, she would have made the dress for me. I still have the old dressmaking ruler she would use. It was incredible.”

Zoe believes whole-heartedly that this kind of love, passion and creativity is in your blood. “My grandfather was a tailor, my family have been collecting their tools of the trade for generations and I have all of them now – my grandfather’s scissors, a jar of buttons passed down from woman to woman,” she says.

“I remember my dad gave me a sewing machine at the age of eight, and I never got taught to use it. I just learnt through play. But I had my first lesson when I tried to make a T-shirt. I cut the fabric, left the space for the arm holes and got sewing. That is when I discovered that not all fabrics can be used to make all clothes. I had to cut myself out of the shirt I made. But I have been loving it ever since anyway,” she laughs.

“My mum wouldn’t buy me a Cabbage Patch Kid when I was younger – she thought they were ugly – but all my friends had one so I became the seamstress for all my friends’ dolls, making them cute outfits.

And despite the numerous ways Zoe has embraced this passion over the years, she knew in her heart that one day she would realise that childhood dream.

“Butler Rd was created as a space to play, to have no fear and to create art. But it evolved into something else: my portfolio. A space to showcase my skills and the calibre of design work I could do,” Zoe says. “I love the jackets, but it isn’t really about them; at its core, it is my canvas for my technique and my design work because since 2016 I have been working on a patent in America that just got approved.”

“Butler Rd is simply the beginning as I transition into my dream,” she says.

And knowing Zoe, that dream will be just as wild, free and full of love and passion as she is.