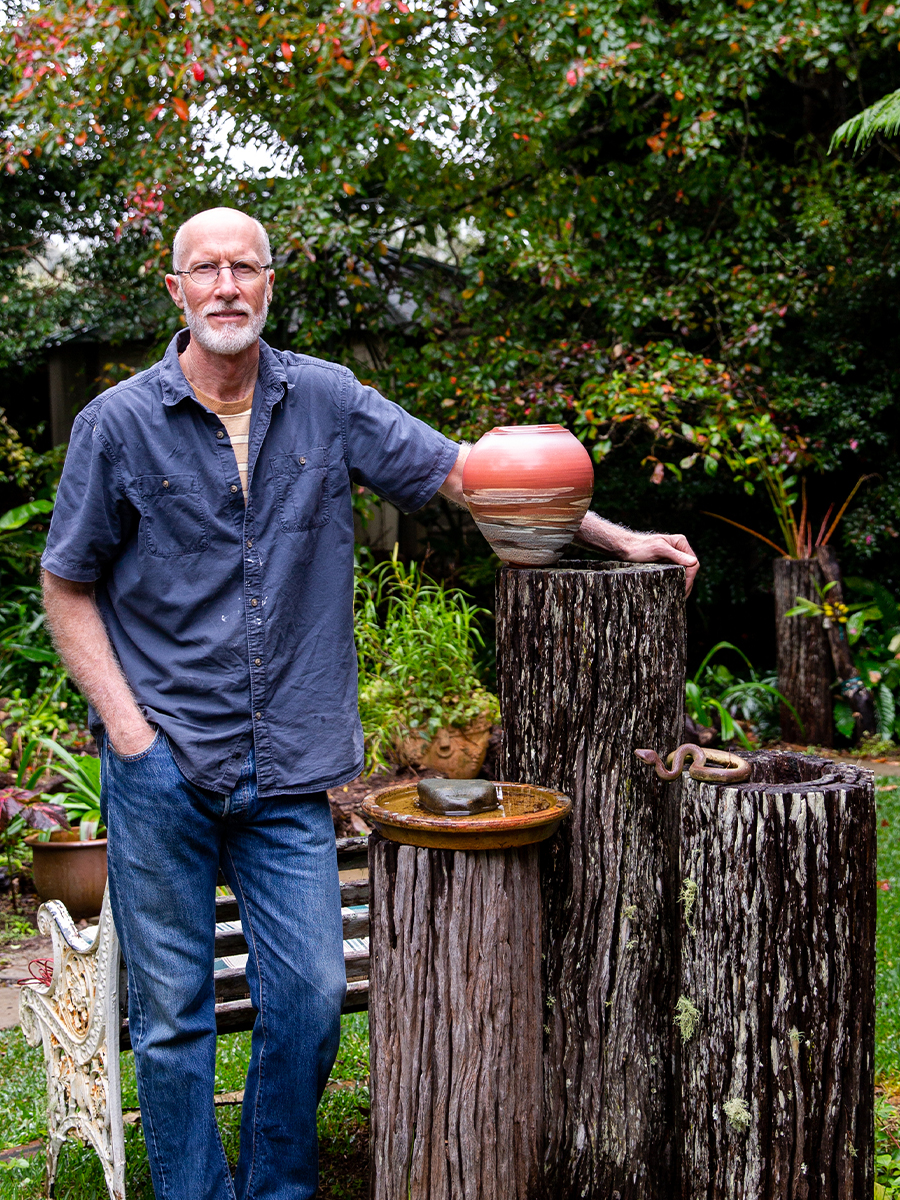 Lindsay Muir’s artistic career has spanned four decades, but it started with an animated can of beer driving a vintage car alongside the catchphrase ‘drink drives you to death’.

Lindsay is renowned for his ability to create realistic rainforest sculptures and craft unique pottery pieces that incorporate multiple forms of clay, but it all began with a humble poster competition. As a 13-year-old Stanthorpe student, he entered a national road safety campaign for schools to design a poster advocating safe driving.

Lindsay’s entry won him $100 and the chance to stand on stage at the school assembly. The win reinforced his love of art, which he spent countless hours doing in his room in lieu of maths homework, but he never realised it could be a viable career path.

Leaving school in year 11, Lindsay worked at a hardware store for about a year, during which time he met a German family who were active potters. He fell in love with pottery, prompting him to enrol at the Darling Downs Institute of Advanced Education, now known as the University of Southern Queensland.

“I was an immature mature-aged student,” he quips. “It was great because the only entry requirement not being a school-leaver was a good portfolio. I probably wouldn’t have got in otherwise.”

Lindsay completed a diploma of visual arts majoring in ceramics and painting and secured work at a pottery on Norfolk Island, fulfilling his desire to live on an island. He created domestic ware such as utilitarian pots, bowls and teapots.

It turns out island life was not for him and only a few months later, Lindsay moved to Montville Pottery, where he was able to hone his craft under highly experienced mentors in a large studio that was open to the public.

Lindsay went into partnership at the Flaxton Gardens Pottery, but when the travel bug bit, he came across an advertisement to manage a pottery in Lincolnshire, which he did while exploring Europe. When his 12-month contract was up, Lindsay returned to the Sunshine Coast and worked part time at The Green Frog Pottery. It was during his days off that he began creating small ceramic frog sculptures and selling them at the Caloundra markets.

“It must have been a subconscious thing that I started making frogs while I was at The Green Frog Pottery,” he says. “They were actually quite comical, which wasn’t my intention. My early efforts were frogs on bowls or sitting on cacti and they were definitely not the elaborate pieces I create now.

“Like anything, it takes a long time and persistence. When you are ready to give up, that’s when you need to keep trying.”

Lindsay was then able to open his own shop, Clay Illustrated, in Montville. He became known in the community as the ‘Frogman’ because of his ability to capture the nuances of the lovable creatures in the sculptural rainforest works he is now renowned for. Lindsay says it was at this time that the influence of his childhood in Stanthorpe came into play. With its expanses of national parks and the high country climate, Lindsay spent a lot of time camping and walking, igniting his affinity with nature.

For the past five years, Lindsay has worked from a private studio in Witta that overlooks the lake at Curramore. He now supplies to local galleries including Maleny Art Direct, Secrets on the Lake and Seaview Artists Gallery at Moffat Beach as well as selling directly online through his social media channels.

Lindsay has learned how to master the way these creatures move by closely studying them and the natural habitats they thrive in so he can create intricate dioramas that tell a story. “I couldn’t do what I do working in suburbia. I need to be able to walk outside and see it all there. Like sitting quietly in the rainforest, I want my work to be a feast for the senses, new things revealing themselves all the time,” he says.

Lindsay has been commissioned to create pieces for numerous national and private park displays and is popular with private collectors around the world. Coffee tables and wall-mounted dioramas are always in high demand.

Last year, he spent two months creating a two-metre-long hall table that featured a clear resin stream running through the middle with a green python, frogs, Mary River turtle, skinks and geckos positioned amongst leaf litter, berries, foliage and fungi. Due to the size of Lindsay’s kiln, the artwork needed to be created in four separate pieces and then fitted together.

Amazingly, Lindsay relies predominantly on just his hands as he creates compositions that come together while he is actively working, never relying on sketches or concept drawings. “I only use wooden tools when needed because I find stretching and manipulating the clay with my hands allows me to create a more natural look. I let the clay do its own thing rather than trying to control the outcome,” he says.

“Often the best things happen by accident the first time. When that happens, I work out how it happened so I can try to repeat it.”

There was a lot of trial and error involved in Lindsay’s latest sophisticated pottery creations, which blend as many as six different types of clay together in one piece. “Normally you can mix two clays of a similar texture together, but because they shrink at different rates, they want to pull themselves apart and crack when you try to combine any more,” he explains.

“I was on the verge of giving up when I found the perfect formula by evening out the moisture content of each clay. I’m pushing clay to its limits, but I have a pretty good success rate now and can use different glazes to get unique looks.”

What started as more pictorial designs have evolved into abstract landscapes reminiscent of scenes such as the Australian outback or the night sky. Lindsay’s pottery is now in as high demand as his sculpture work, keeping him very busy in the studio.

“If I’m away from the studio for more than a few days, I get a bit antsy. I love creating and it never feels like work,” he says. “How on earth I’ve made a living out of this still blows me away, but I would say it comes down to making the most of every opportunity that comes along.”