A world of colour 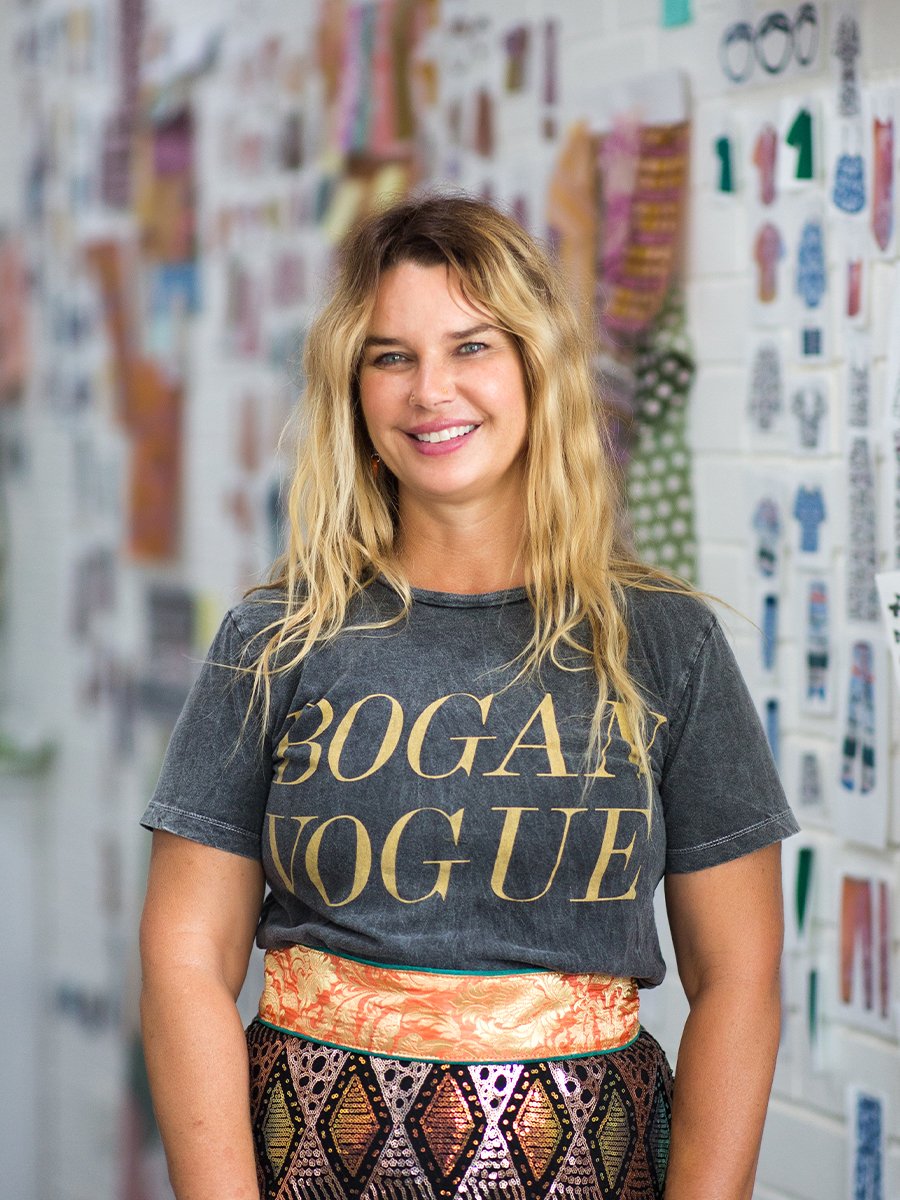 Dui Cameron has always loved playing dress-ups. As a child, she insisted on wearing elaborate outfits that paired rainbow socks with tutus and other getups her mother wasn’t thrilled to see her wearing out in public. But if anyone tried to make young Dui change, it was a nightmare. Now, she gets to dress up all she likes, mixing crazy colours and patterns and taking her inspiration from around the world as the owner and designer of cult Sunshine Coast clothing label Boom Shankar.

“No one could dress me as a kid,” she laughs. “I’ve always created my own look. I was with a friend’s daughter recently and she put on tie-dyed socks with black boots, a vintage lace-looking dress with a leather jacket. I said, ‘That’s your look!’ I love looking at what you’ve got and how you can change it completely from what you would wear to a wedding to what you would wear to a gig. How you can turn something pretty and feminine into something a bit punky.”

Dui’s sense of fun around clothes has garnered her a legion of fans. Women of all ages and shapes gravitate to Boom Shankar’s colourful, edgy, comfortable designs. She thinks about how her garments will sit on women of all sizes when she designs them and focuses on getting good, flattering cuts and pairing those with gorgeous fabrics and interesting and exotic prints. It’s a winning formula that has attracted a following of 26,000 Instagram followers and the kind of customer loyalty most fashion designers would die for.

A radiant woman with a beautiful smile and an equally beautiful heart, Dui puts a lot of love into each new collection she designs, taking her inspiration from our global community. Originally inspired by the colours and culture of India – where she has a beautiful home and supports a number of charities – she has now branched out to incorporate everything from Mexican embroidery to Pacific Island prints.

“The story for this summer is all about community,” she says. “There are so many amazing things currently happening with Islander cultures. I met a young girl called Demi who is of Samoan heritage and I loved her. She’s a beautiful girl and I loved her energy. It took me down a really beautiful path and you can see that in the collection that’s out now. I chopped and changed and it became a lot about the islands around Australia – Fiji, Samoa, New Zealand – coming back to our First Nations people.”

Dui was making clothes out of old doilies and sewing lace onto bras to sell at the markets from a young age, but it wasn’t until she ventured to India in 1994 that she found the inspiration for what would become Boom Shankar. She began sourcing second-hand saris and upcycling them into pretty boho pieces that sold like wildfire at the flea markets in Goa. From those humble beginnings, she now employs a team of 20 in Australia and around 600 people in two factories in India.

“The factories aren’t my factories but the people who work there are like family,” she says. “They love doing Boom Shankar because I’m normally over there with everybody. I’ll sit down on the machine, I’ll make chai, we have parties at my house. All the staff come to my house and we do traditional Rajasthani food for everybody. I think it’s important to know who makes your stuff and it’s important to have that personal connection. I couldn’t do it any other way.

“I know everybody who stitches for us, which is beautiful,” she says. “I’ve been in meetings with the owners of the factories who say, ‘we can’t believe you’re sitting there with the sample makers and pattern makers, some of these bigger companies have never met the staff’. I love working with all the sample guys; you can see it while it’s being made on the machine. You can see if there’s a mistake and you can get onto it quicker. I speak Hindi and it’s great fun going around and being a bit silly with them. You become friends with everybody and it makes it so much more enjoyable to work.”
With her 17-year-old son Charlie back in Australia when COVID hit, she made a mad dash back from India in the middle of May. After almost not making it out of India, she arrived safely back in Australia and went into quarantine. She usually makes several trips to India each year but this year has been different. Biding her time at her home in Peregian until she can return, she’s had serious concerns for her many friends in her adopted homeland.

“It’s definitely a worry,” she says. “I worry about everybody. I’m incredibly close to my family over there. I have a friend in Mumbai who has been in lockdown in his apartment for months. I talk to him quite a bit.

“What we’ve had to do is re-evaluate and have a look at how you can keep up your communication and feel like you’re still there when you’re not. I’m always doing video calls – I like to look at people when I talk to them.

“I just love India and the Indian culture,” she says. “It’s a burst of colour in so many ways. My favourite designer is a guy named Manish Arora – he’s out there. I met him in Delhi before he was famous. He’s one of India’s most amazing designers. He’s quirky, he’s colourful, he goes all out. I have a couple of his pieces – they’re very expensive. But his designs are just insane.”

Dui is currently working on her summer 2022 collection, which is heavily influenced by her love of India. You can take the girl out of India, but you can’t take India out of the girl.

“I can’t wait to get back there,” she says. “At the end of the day, my really strong belief is that we may be separated by culture, but we’re all connected. We’re all family, no matter where you’re from. We have such a great platform to be able to share that. That’s where I think fashion can change things. It’s a platform to share the stories of other people.”