Spring rain is soaking Maleny’s parched landscape after a long dry spell, and Steven and Tyyni Lang are savouring it, relaxing by a cosy fire inside their earthy forest home. For a pair of literature lovers, their living room is strangely absent of books. 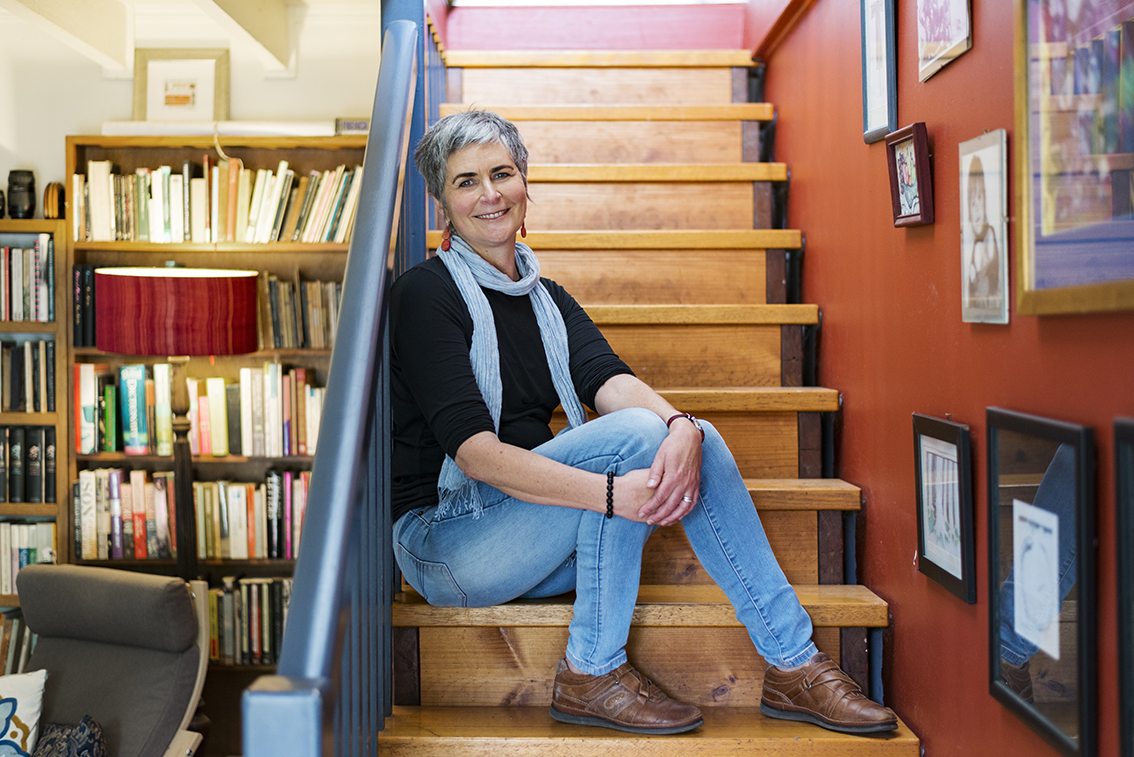 Spring rain is soaking Maleny’s parched landscape after a long dry spell, and Steven and Tyyni Lang are savouring it, relaxing by a cosy fire inside their earthy forest home. For a pair of literature lovers, their living room is strangely absent of books.

But hidden away upstairs, safe from the prying little fingers of their seven grandchildren, tall bookcases line the walls like works of art. A glass cabinet in his writing room safeguards Steven’s Shakespeare collection and dozens of personal journals, while a tower of novels and nonfiction threatens to topple over on Tyyni’s bedside table.

They came from different worlds – he was from Scotland and boarding school educated, she was a Woombye girl who went to Nambour high. Both arrived in Maleny in 1989 but didn’t meet until eight years later over a borrowed copy of Tim Winton’s Cloudstreet.

Like all good love stories, theirs contains a little magic. A mutual friend was housesitting for Steven while he was overseas and when Tyyni visited, he let her borrow the book from Steven’s library. An avid reader who’d lived in Western Australia, she felt an affinity with the book’s setting. She’d planned to leave it in the letterbox when she finished reading it, but as fate would have it, Steven had returned from his trip and invited her in for tea.

Known then as Chris Francis (she recently changed her name to her Finnish grandmother’s name, Tyyni), she was the lead singer in a local rock covers band called The Old Farts and Sweet Tarts, an image at odds with the quietly spoken, private person she is today. Steven still has fond memories of the little black dress she wore on stage.

“He was nice to my children and when he took me out to see his vegie patch, I must say I thought that was pretty sexy,” Tyyni says. She’d read his book about the Mary River called A Strong Brown God and found it fascinating.

So began a partnership that has revolved around the world of literature and seen them blend their families – they have a son and daughter each from previous relationships. They married in 2000 by the river of their Maleny property.

“I realised if I let her slip through my hands I’d regret it for the rest of my life,” Steven says. “So I took her to Mudjimba and asked her to marry me.”

The following year, they opened Rosetta Books in Maleny without having a clue what they were doing. They built the store downstairs and a cafe upstairs, where they held small author events. “I’d always wanted to be a bookseller but we didn’t even know how to buy a book,” says Steven. “We didn’t know where books came from or how to fill a shop with books.”

With support from Leading Edge, a national buying and marketing group for independent bookstores, they created a successful business, despite competition from powerful retailers.

“Large chain stores were undercutting everybody,” Steven says. “This was the time of Harry Potter and it was extraordinary because people could buy the Harry Potter books from discount stores cheaper than we could buy them from the supplier. This completely ripped the book industry apart.

“Now in Australia the independent sector is the most profitable,” he says. “A bookstore is a curated space. You go into a bookstore and all the guff has been pushed aside; the booksellers have chosen what they think you’ll find interesting. If you want to be introduced to something new, feel a book, see what it looks like and open the page, you have to go to a bricks-and-mortar bookstore.”

Steven was teaching creative writing at the University of the Sunshine Coast and had completed the manuscript of his first novel, An Accidental Terrorist, when editor Julia Stiles wandered into Rosetta Books and Tyyni grasped the opportunity.

“I realised if I let her slip through my hands I’d regret it for the rest of my life. So I took her to Mudjimba and asked her to marry me.”

“Steven was always very sensitive about his writing and when I met Julia Stiles in the bookshop I said, ‘My husband has written a book, would you like to read it?’ which is a terrible thing to say to an editor.”

“Instead of groaning and walking away, something about Tyyni’s enthusiasm encouraged Julia to ask to see it,” Steven says. “She liked the book a lot and told me so, to the extent of writing a supporting letter when I submitted it for publication. I won the Queensland Premier’s Literary Award for best emerging author in 2004 and Julia became my editor.”

Tyyni’s support for Steven’s writing has continued through the publication of three novels and his latest, Hinterland – which is inspired by the social, political and environmental landscape of Maleny – is dedicated to her.

They sold Rosetta Books in 2007 and it’s still going strong today, albeit bigger and further down the main drag. But to ensure great writers kept visiting Maleny, the couple launched Outspoken, a popular local literary event now in its seventh year. It punches well above its weight for a small country town and tickets to see the man whose work inadvertently brought the couple together, Tim Winton, sold out in record time last year. Winton commented to a capacity crowd of 450 that he wouldn’t get that many people turning up to see him speak at home in WA.

“The lovely thing for me about Outspoken is because of the success of it, we now have a reputation in the publishing industry. So if I ring up Melbourne University Press and say ‘we’d like Gareth Evans’, they don’t say ‘who are you?’” Steven says. “Most of the time they’ll ring you back and that’s really exciting.”

“When the publicists come, they’re so impressed, they can’t believe it,” Tyyni says. “On tour, the authors often have three events a day and it’s really gruelling. To come to Maleny is a nice break and then they find themselves in front of a hall of interested people with a welcoming interviewer.”

A lot of work goes into bringing authors the calibre of Winton, Richard Flanagan, Alexander McCall Smith, AC Grayling, Magda Szubanski, Kate Grenville, Christos Tsiolkas and Thomas Keneally to Maleny, and while it recently started to make a small income, Outspoken is mostly a labour of love.

“It’s very labour intensive,” Steven says. “Preparing for those interviews, having to read their books – you have to read a fair bit of their work to have a sensible conversation. Tyyni helps on the night and I do the publicity, printing, writing and interviewing.”

Tyyni also promotes the event through Maleny Bookshop, the second-hand bookstore she owns with friend Fi Hunter, which stocks rare and out-of-print books. While she says she’s never had the inclination nor the patience to write her own book, her passion for the written word is palpable.

“It’s fascinating being in second-hand books,” she says. “You find books on the most extraordinary topics. It’s wonderful to find backlist books of old writers from the late 1800s and early 1900s. Some are extraordinary.

“One of the fun things about owning a bookshop is talking books with people. People come in and say, ‘do you have anything from this author?’ and you’ve never heard of them. That’s what makes a good bookseller – you have to be curious to new writers and ideas. That way it’s always fascinating and interesting.”