It was love at first sight for this happy couple. 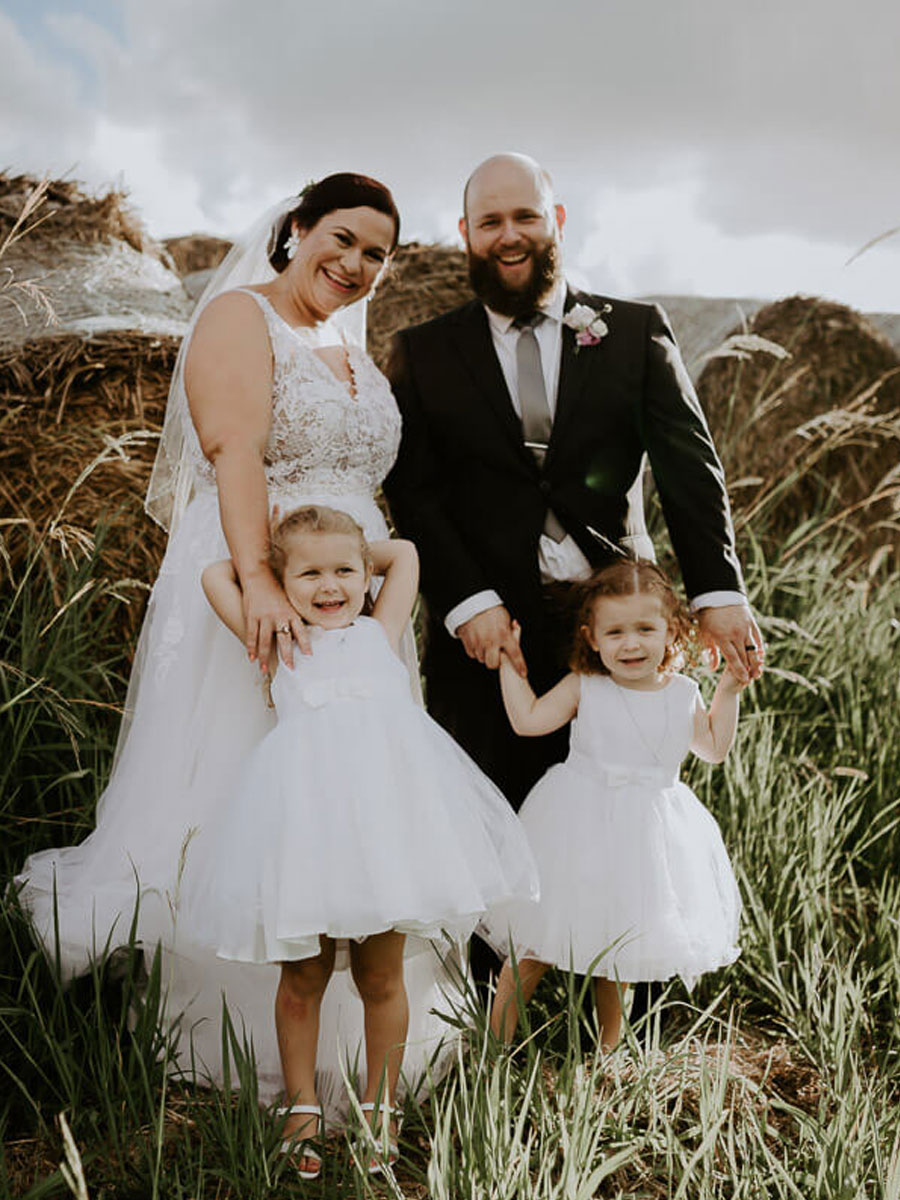 Having met a few duds on Plenty Of Fish, the predecessor of dating app Tinder, Carolin Foster admits she had almost given up on settling down and starting a family. Little did she realise her dreams would be fast tracked once Mark Dew showed up for their first date.

In fact, their connection was so strong they shared another date the following night and mutually decided to disconnect from online dating. Carolin describes Mark, a Queensland Health operational officer, as “really charismatic, genuine, down to earth and so easy to get along with”.

“We’re actually quite different, but we share really similar values,” she says. “I am a bit more of an adventure-seeker while he likes to watch movies. We really complement each other.”

The couple had been together for only a few months when they fell pregnant with their first daughter, Matilda. “We were pretty much parents from almost the beginning of our time together and we joke that our romantic time will be when the kids grow up and move out,” Carolin says.

“The first 12 months were the hardest as I had hyperemesis gravidarum, so the extreme sickness really impacted on my ability to manage everyday things. Even though we were living separately at the time, I had to really let go of my usually controlling tendencies and trust and rely on Mark to look after me a lot… and I will never forget being introduced to people as his new girlfriend at six-months pregnant.”

They were so wrapped up in family life (Mark and Carolin welcomed another daughter, Evelyn, who recently turned three) that they were together for five years before they became engaged.

Carolin says the proposal came on one of those rare days when they had time off work together and both the girls were in day care. “We had just been on holiday at the Gold Coast and I’d figure if it didn’t happen then, it wasn’t going to happen because we don’t go away often,” she says.

“We had breakfast at Cafe Diversity in Redcliffe and I was already feeling a bit sick with hay fever when he suggested we go for a walk to the jetty, but all I wanted to do was go to the post office and pick up my new earrings because I knew my parcel had arrived. And besides, he never walked to the jetty.

“He was acting awkwardly and when we got into the car, I noticed the ring box poking out of his pants, so I decided I was getting it today! I then found a spot to pull over and said, ‘This looks pretty good, let’s go for a walk here,’ and then he knew that I knew. I bullied him into it, if we are honest.”

Carolin says she later found out he’d had the ring in his pocket for three weeks but had struggled to find a quiet moment to pop the question.

“When I rang my dad to tell him, he said he’d thought Mark had changed his mind,” Carolin laughs.

Marriage had been on the table “from the get-go”, but Carolin says they decided to wait until their daughters were old enough to enjoy it with them.

“It was worth the wait,” she says. “Matilda was beaming all day; she loved every second of it. Evelyn was a little different. She slept through two hours of the reception but woke up to a specially made dinner plate and then spent a lot of time on the dance floor.”

Carolin and Mark exchanged vows in front of 102 friends and family at The Imperial Hotel Eumundi’s venue space, The Brewery, on January 11 this year. Celebrant Jo Lincoln set the tone with a relaxed and joyful atmosphere. “It felt like we were getting married with a lifelong friend guiding us through it and our guests raved about her,” Carolin says.

At Carolin’s insistence, Jo switched up the bride’s ceremony entrance to have a “rock star” introduction so she could replace nerves with excitement for their 4pm ceremony.

Wearing white tulle dresses with a bow on the front and braided hair, her daughters were gorgeous as they led their mother, resplendent in a lace and tulle A-line gown, in the procession down the aisle. The moment was made even more special as Mark’s brother and sister-in-law sang an acoustic version of Sea of Love with the guitar and melodica – a harmonica with keyboard keys.

Carolin and Mark injected a number of personal touches to their big day to create an event that was truly unique to them.

“We incorporated the girls into the ceremony and prior to Mark and I exchanging rings and the vows we had written, we gave them a diamond heart necklace that we bought from money left to me from my Nana Rita, who I only met once when I was six weeks old,” Carolin explains. “It was so special to give them this gift from their great-grandmother.”

Heavenly Blooms transformed the feel of the concrete and wooden pallet space with flowers in a mix of lilacs, peaches and pops of colour in the bouquets and on opposite sides of the aisle to create a cottage rustic look.

When guests moved into the reception space, there was a feeling of spaciousness and meals were served in a kinfolk style, with food placed on specialised frames in the middle of the tables to allow guests to help themselves.

The plates were surrounded by greenery and fairy lights and with a view overlooking the brewery tanks, there were plenty of memorable features to enjoy.

After the first dance, the dance floor began pumping and the groom’s request for Baby Shark went down a hit with the adults, with around 50 guests busting out moves to the YouTube sensation.

Carolin says their engagement was just six months long as her brother and his family were visiting New Zealand all the way from Sweden in January and she wanted to make sure they could attend. With a short timeframe in which to organise the wedding, Carolin says they knew they had found the right mix of uniqueness and functionality when they found The Bunker at the Imperial Eumundi Hotel.

“I loved the vibe of it; it was something completely different to the other weddings we had been to before… and it was air-conditioned, which is great for a January wedding,” she says.

“When we first decided on the brewery, we asked who the venue recommended and decided to use all the vendors who had worked with them on their photo shoots because they were familiar with the space and knew each other, so we knew the day would run smoothly. It was a nice cruisy way to approach it and it was absolutely perfect.”

While life has returned to normal for the family, with Matilda starting prep at the end of January, little Evelyn still cherishes her mummy’s veil, which she calls her “dress blanket” and often puts it in her hair and twirls around the house. It’s a wonderful memento for the Dew family that will forever remain in their hearts.