Simon Leyshan and Holt Meyers have created a luscious home in Maleny. 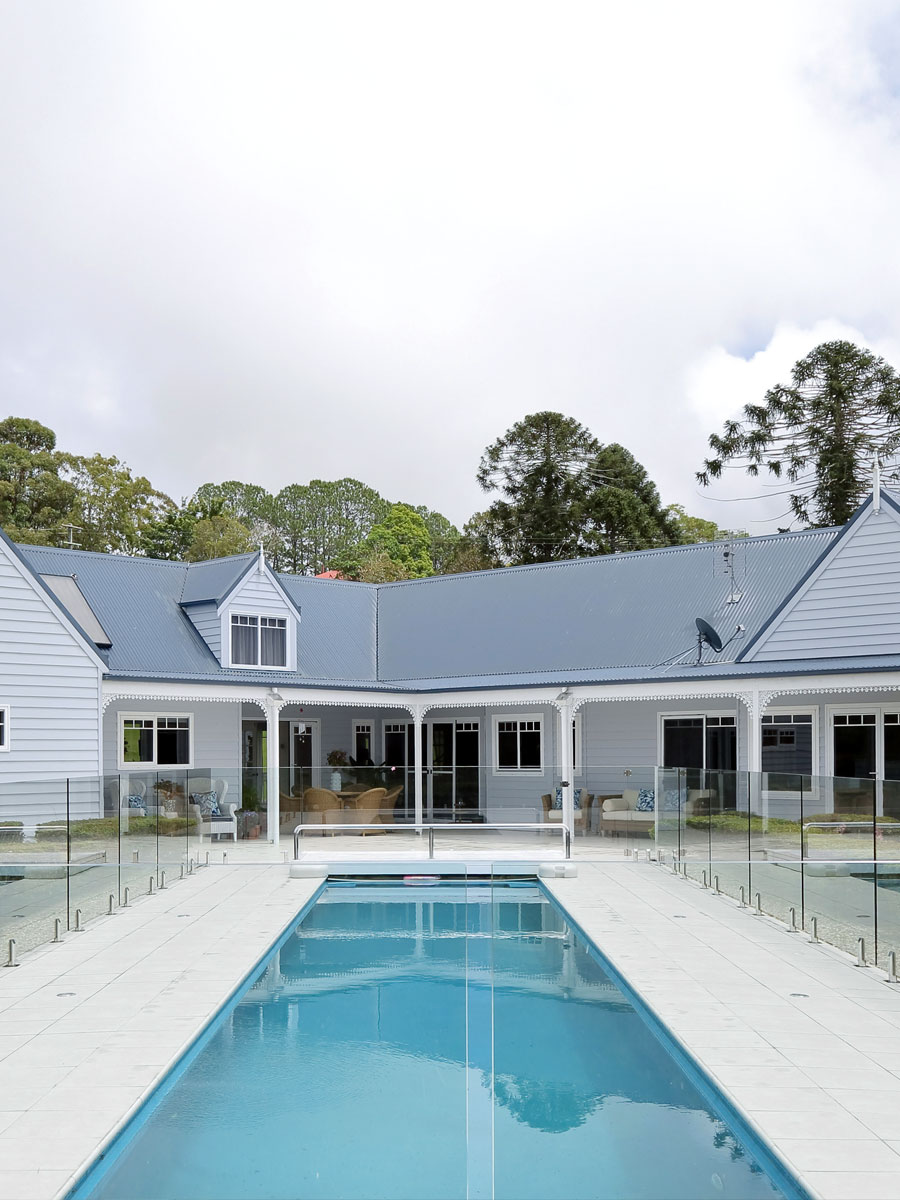 Simon Leyshan and Holt Meyers had lived in some beautiful homes in Brisbane, but when they became dads almost five years ago, they craved a tree change. Somewhere fresh, quiet and green, where their daughter Olivia could run free and have lots of pets.

“We loved our house but the shutters were always closed because the neighbours were so close,” Simon says. “I said, ‘I want to live somewhere where we can just look through the windows and see the view’.”

Late last year, they went for a drive to Dulong and after a scones stopover in Flaxton and a look around Montville, headed to Maleny. They’d never visited the town and were surprised to find a thriving, arty village. When they noticed an ‘open home’ sign, they followed it on a whim.

“As soon as we came over the hill and saw the house, it was instant,” Simon says. “We just knew it. There are special moments you remember in your life, and this was one of them. I remember saying to Holt, ‘Oh my god, look at that’. We hadn’t even sold our house in Brisbane and we bought this house five days later at auction.”

They moved into the Hamptons-style country house in North Maleny in October last year and set about redecorating.

“It was owned by a doctor from Brisbane who used it as a weekender,” says Simon. “The home I always thought about living in when I had a family was a Queenslander. I like warmth and timber and I like a collected look. I don’t like the minimalist look. I have done that and it suited our lives when we were busy and I wanted something clean and tidy. This feels more family and has a homely feeling. That’s what you get from using timbers and rugs and a bit of texture. Because it’s up in the mountains it has a fireplace and we wanted it to feel cosy, not industrial.”

Simon, a personal trainer, has been a stay-at-home dad since he and partner Holt had Olivia through a surrogate mother in America. Holt runs his own IT business with an office in Maleny, leaving Simon to be the stay-at-home dad. Simon’s parents live in their own quarters on the property, so Olivia has plenty of contact with her grandparents.

With a little help from his parents, Simon does most of the cleaning, mowing and gardening, taking pride in keeping the 22-acre property looking pristine. Out the back is a lap pool surrounded by a formal garden, and with the Obi Obi Creek running along the bottom of the property, they have their own private waterhole.

“There’s a cedar cabin near the waterhole and last summer we hung out down there having barbecues,” he says. “The swimming hole is what sold the house for us. It wasn’t actually the house, it was the land and the living area.”

However, the house is beautiful. A welcoming, breezy entrance separates two wings of the home. To the left are the family quarters, while to the right is a self-contained guest wing that can be closed off for complete privacy. High ceilings and dormer windows create the impression of space. Each of the four bedrooms has its own bathroom and the sunken bath in the guest wing is delightful, set against a large window overlooking nothing but rolling green hills and a big hinterland sky.

“We were wanting a smaller house,” says Simon.

“But even though it’s not a small house, it’s a lot smaller than what we thought. The windows make it look like two levels. It’s a good thing, because it’s more homely for us.”

Simon has a knack for styling and has become an influencer through his popular Champagne Dad Style Instagram page, which has 18,000 followers. He’s constantly being sent household products to review and accepts only products he would genuinely use. He’s turned down multiple offers for Olivia to review products.

“I went onto Instagram because I was quite depressed when Olivia was about two years old,” he says. “I’d never had depression before. I’d been backpacking around the world for six years and then I found myself at home with a baby. My role in life was so different. The mums at the mother’s groups were nice and would say hi, but they would stick to their groups. The dads were nice but then they’d find out we were gay and we’d never see them again. My psychologist suggested I try Instagram to zone out a bit, and also get back into the outside world. The biggest thing for me was finding other families like ours. It was so uplifting.”

Simon had always enjoyed styling homes, so he shared photos of himself, Holt and Olivia at home and on their travels, and it took off. In styling their Maleny home, he aimed for a contemporary yet cosy look, which has a spacious, bright feel, with splashes of blue in the soft furnishings and white tiles throughout.

“The tiles are practical and help with mould, but I want to do timber floors in future,” he says. “I’ve used big rugs to make it a bit warmer. I don’t want to come across too old, but I like old pieces. A lot of Hamptons homes would have Persian carpets but I’ve added modern rugs and pieces like a brass and marble coffee table, the blue and white hunting chair and a teal velvet Chesterfield couch, tan leather armchair and fluffy white cushions.”

Like the rest of the house, the kitchen has a spacious feel that’s both country and contemporary, with a black Falcon stove, cathedral ceilings and stone benchtops. A window overlooking the outdoor entertaining area and pool is filled with pot plants and every item is stowed with precision.

“We don’t go to bed unless the kitchen looks like this,” Simon says. “Everything has a home, and everything has to be there.”

The exception to Simon’s impeccable orderliness is four-year-old Olivia’s bedroom, a perfect little princess hangout with plenty of pink, a double bed and her own ensuite complete with piles of makeup she loves to play with.

“I’m a neat freak and I can’t think if things aren’t neat,” says Simon. “But Olivia’s room and bathroom can be messy. Her side of the car looks like a wild animal lives there. She just eats and drops things. At the end of the day she’s having fun and doing her thing. She’s just a kid and they don’t need to be so neat.”

Olivia will start school next year, freeing up Simon’s time for a new online business venture, selling photographic prints he makes himself and will print at home.

“This year I’ve been taking photos and editing them,” he says. “There will be landscapes and botanicals in black and white and colour, but I’ve changed the colour so it suits a modern look. Some of the pictures have a Scandi look, which is quite on trend.”

For now, Simon has his hands full with Olivia, the chickens, the cat Theodore and their three miniature Galloway cows Noah, Nigel and Nero, which they bought from Byron Bay Galloway stud. They make great pets for Olivia and they mostly look after themselves, he says.

While the house no doubt appears perfect to most onlookers, there’s still plenty Simon would like to do before it feels exactly right – renovate the kitchen, lay carpet in the bedrooms, install plantation fans… But for now, he has a little lady to prepare for school and reckons he’ll shed quite a few tears on her first day.