At the age of 25, Kate Pilcher experienced a quarter-life crisis. She had graduated from university, met the man of her dreams and launched her own magazine. 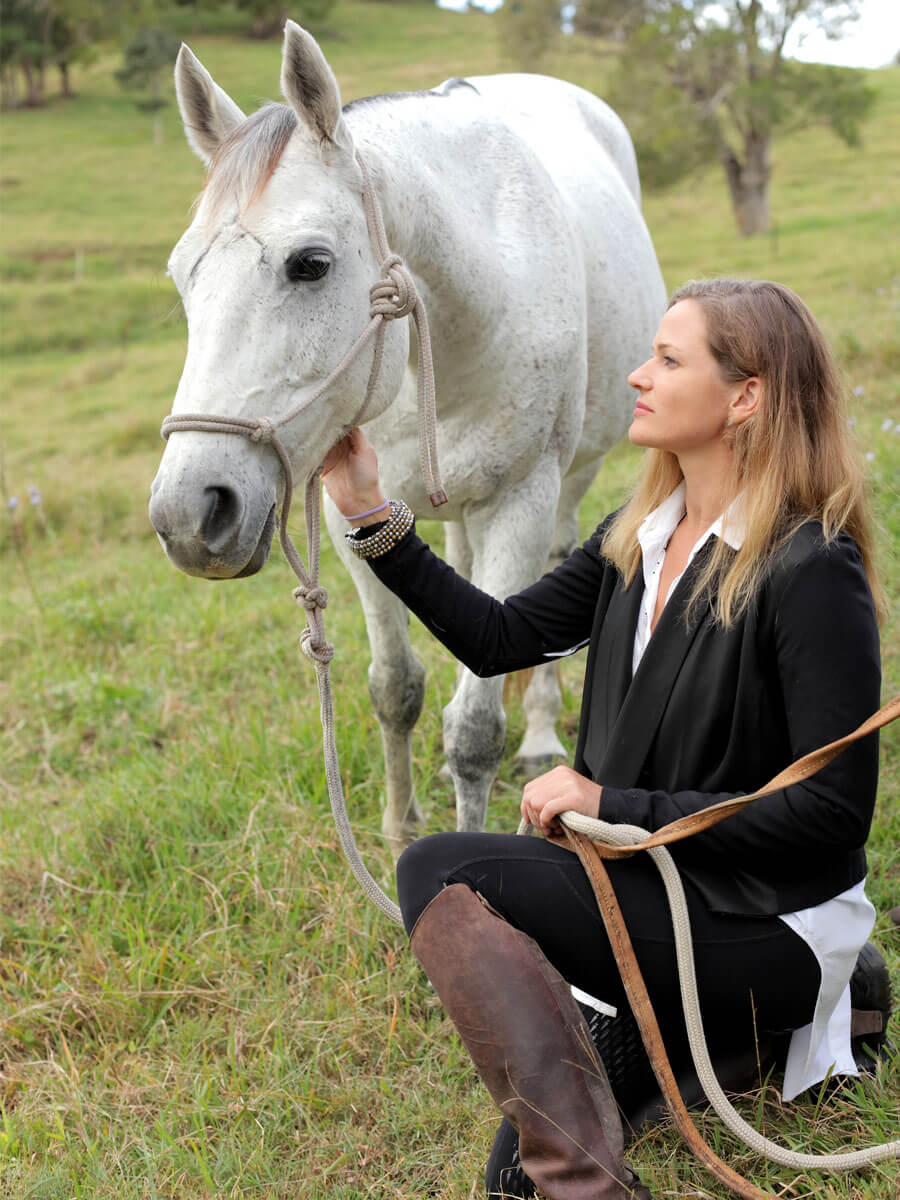 At the age of 25, Kate Pilcher experienced a quarter-life crisis. She had graduated from university, met the man of her dreams and launched her own magazine. She could see her life mapped out ahead of her – marriage, kids and a mortgage – and it was all feeling a little too predictable. Then her parents, who had always been her rock-solid supporters, separated and it shook her world to its core.

The ambitious young career woman called time out on her life, told her boyfriend Steven not to wait for her, and fled to South America to work on a 1000-acre estancia in Patagonia, so remote it was accessible only by horse.

“I wanted to completely tap out,” she says. “I worked with the gauchos, learnt Spanish, broke in horses and was in the middle of nowhere and it was really nice. I loved it. I think there was only one day I wasn’t on horseback for those six months. From there I went to Kenya and worked as a back-up horse-riding guide. I learnt Swahili and realised there were all these people coming and wanting horse-riding experiences.”

“Dad had racehorses when we were growing up and he was always a horseman,” she says. “Weekends for us were spent riding. We weren’t a horsey family where you go into shows, but more your grassroots people where it gets you into nature and you have picnics beside creeks. We’d ride along and there it was – stitched into our lives from a very young age. My brother and sister and I were plopped on a horse 16 hands high at two years old – there are photos of us looking like pimples on the back of a horse with Cheshire cat grins. It was such a happy place and I had a lot of one-on-one time with my father, who has been a massive influence on my life.

After school, Kate moved to Brisbane to study communications, majoring in photography, and indulged her passion for travel, working in marketing in Edinburgh, travelling to Turkey for Anzac Day with her brother, and then to Kenya with her father, Angus.

“The first big trip that really impacted me was when Dad and I went as journalists to Kenya to do a Masai Mara ride,” she says. “It was an explosion of moments – travelling in a Third World country, going to Africa, travelling on horseback and to be entwined in the wildebeest migration, the biggest migration in the world.”

Kate and Angus teamed up again when they went into business together. Kate’s parents had sold the family farm and moved to Maleny in 2000. Kate, having cut her teeth as a journalist at The Range News in Maleny, saw an opportunity for a new Sunshine Coast publication that would tell the stories of salt-of-the-earth people. Kate’s love of writing and photography coalesced into salt magazine, which she launched in 2005 at the age of 24.

“I loved magazines but I was never into gossipy magazines,” she says. “I really loved the idea of everyday people’s stories – that always fascinated me. I never felt famous people had interesting stories. I was always interested more in people sitting beside me on a bus.”

As editor and publisher respectively, Kate and Angus brought salt into being and, against all advice, decided not to feature people on the cover and instead to showcase the stunning Sunshine Coast environment with incredible photography.

“The cover is one of the strongest points of salt,” she says. “It highlights the region we love so much. No one else has ever done it; it’s just cool.”

It was a year after launching the magazine that Kate took her soul-searching journey to South America and Kenya, a trip that was to change the course of her and Steven’s lives. She loved Kenya so much she wanted to show it to him, and they returned with 10 riders from Maleny, thus launching their first Globetrotting trip.

“It’s a really special place,” she says. “Not only is the horse riding phenomenal, you can get within spitting distance of a lion or giraffe, but also seeing the Masai is hands-down astounding. You can be sitting around a campfire and you hear this heaving and reticulated singing and they come and dance around a hurricane lamp. The people have nothing and they are the happiest people you will ever see. I find that to be really infectious. It’s something I want to grasp hold of every time I go. The honeycomb plains, the flat-topped acacia trees, storms rolling in in the afternoon – it’s the quintessential Africa you see in the movies.

“I thrive on adrenalin and adventure and new things. If a lion was to stalk me or I was to get charged by an elephant, I’ll be there taking photos. It happens all the time – it’s generally the mums protecting the cubs. The elephants are probably scarier than the lions – that’s why we say you’ve got to be able to gallop out of trouble. It’s a calculated risk for me because I can ride a horse. The ocean scares the hell out of me – I wouldn’t go in a boat.”

Kate launched Globetrotting in 2009 and ran it alongside salt for a number of years. After she married Steven in 2010 and settled into life on their picturesque Dulong acreage, their daughters Finn and Birdy came along and things really amped up.

Realising she wanted more time with her family and to pursue her passions for riding and travel, Kate sold the magazine in December 2015 and focused on building Globetrotting into the successful business it is today, offering horse-riding holidays, safaris and treks to all corners of the globe, including Mongolia, Kenya, Botswana, Namibia, Chile, Argentina, Brazil, Japan, New Zealand, Canada and here in Australia.

Finn and Birdy share Kate’s love of riding and it’s no wonder – she plonked them both on a horse at a young age, just as she had been. Finn was only seven months old when Kate took her riding through Argentina.

“All these other mums shook their heads at me,” she says. “When I was pregnant with Finn, I always said I love to travel and I don’t want that to change. I wanted to take Steven to the estancia where I had that time by myself. Finn was seven months old and strapped on my chest. We rode into the estancia on a full moon and crossed over the river on a gorgeous little grey mare.”

While she admits it’s not “all sunshine and lollypops” embarking on such grand adventures with kids in tow, the nature of the family business is riding horses in far-flung locations – Kate test rides every holiday she offers – so the children have to go along for the ride.

Kate gave birth to her third child, Poppy Mae, in March and true to her intrepid nature, plans to take the baby on a horse-riding trip from Iceland to Morocco from August to December, which she is guiding along with Steven.

Kate’s vibrant energy and joie de vivre is infectious and rubs off on her clients, who say their trips with Globetrotting are life-changing.

“My Globetrotters can’t have a quarter-life crisis and go to Kenya and Argentina for six months, but I can give them a snapshot in time – 10 days,” she says.

“It keeps them centred. Life is so chaotic and fast. When you’re on a horse, it slows everything down. It fills their cup up for another year. It gets them back into nature, it resets you again. You come home with renewed vigour for your life and renewed clarity, because you’ve had time just to be.

“It’s that slower pace, where all your senses are alive; you’ve got the rhythm of your horse, you’re cantering, the dust is flying up from a rider beside you, there’s the smell of the landscape. You feel alive; you’re in the present moment.

“You’re connected with an animal and you’re seeing an area from that level. If it’s not the danger of the animals in Africa, it’s rubbing shoulders with the country folk of that area. You get weaved into those horse cultures around the world. It’s really special.”

One of Kate’s dreams – and she has many – is to take her children riding in Mongolia.

“That’s the best place for them,” she says. “A lot of children ride over there. I just want them to see that world. That’s just going to blow their minds.”

She firmly believes in the importance of children seeing their mothers doing something they love in life, and hopes she’s been a good role model in that sense.

“With all my career choices or business choices, they’ve always come down to what I love doing and that’s got to be a good thing for them to see. I’m lucky I found my passion early on. People can go through their whole life not having something that lights them up. I’ve been lucky to find what lights me up.”