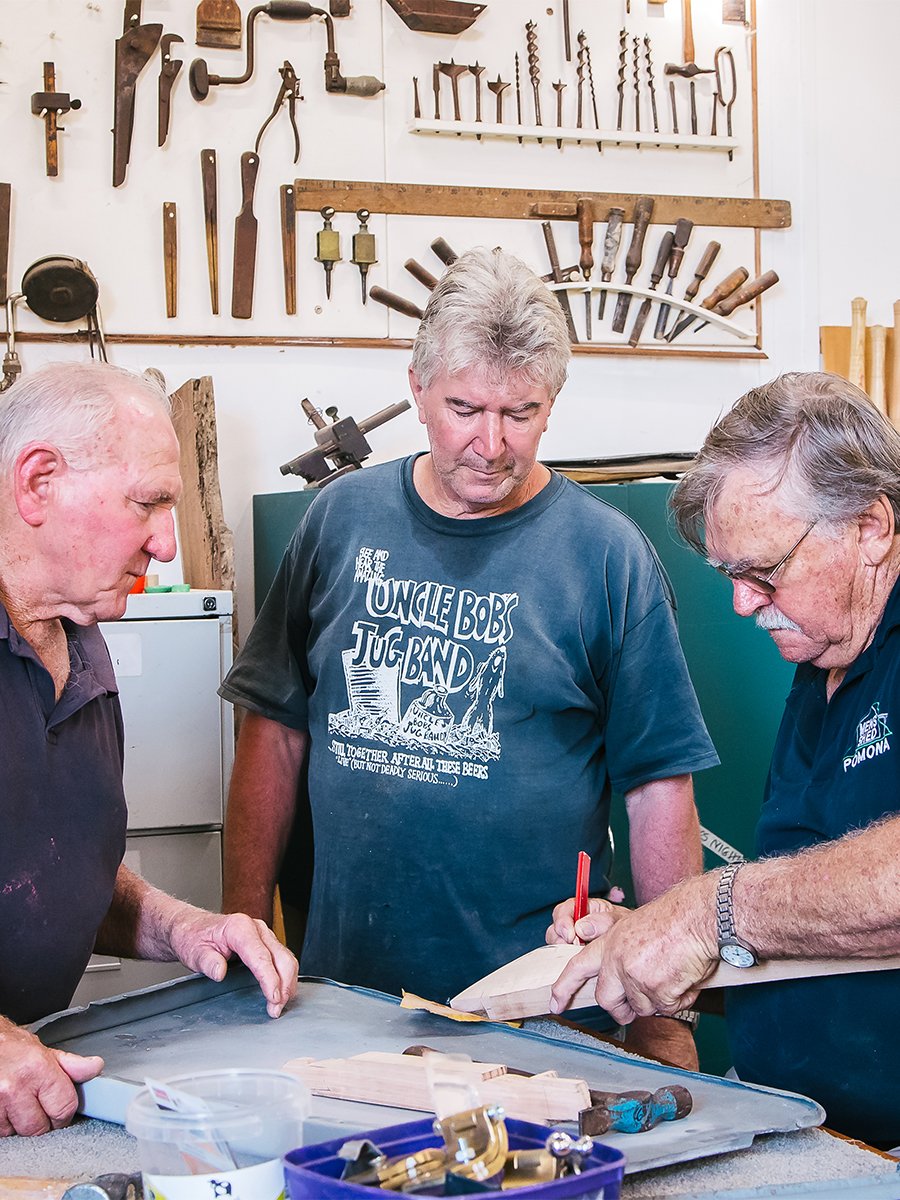 Nestled inside an industrial shed set under the soaring canopy of gumtrees is the Men’s Shed Pomona. Its iconic mural of two hands clasped in a friendly grip is a reminder of the mateship that is formed inside these four walls.

But this isn’t your regular mateship. This is the kind that is helping improve social wellbeing and saving the lives of those who have suffered deeply from loneliness and heartache. The men who gather in this space of sawdust and cups of tea will tell you myriad reasons that brought them to this place, but it’s the friendship, the shoulders to lean on and the understanding that keeps them coming back.

According to the Australian Men’s Shed Association, there are almost 1000 Men’s Sheds throughout Australia with thousands of active members, and the Men’s Shed movement has already migrated to countries such as Canada, Denmark, Ireland and New Zealand.

Associate Professor Mathew Summers from the University of the Sunshine Coast explains that for many older men, their social network revolves around their workplace and upon retirement they can lose that social connection and become isolated.

“The Men’s Shed offers the opportunity for older men who are disconnected to reconnect with their peers,” he explains. “Men’s Sheds operate in a way that works for men. It is a generational thing and we are seeing changes, but many men find face-to-face conversations intimidating when disclosing personal issues.

“They find it best to do this side by side while working on something else. Standing next to each other is a much better way. This explains why Men’s Sheds are popping up everywhere. This is an expanding movement. It is filling a need.”

Indeed, it’s social connection and a sense of purpose that drives men from Cooroy, Pomona, Eumundi, Kenilworth and south Gympie to gather at the picturesque Men’s Shed Pomona. It’s here the men can pop on the kettle and settle in for a chat or get to work on a project where they will work shoulder to shoulder.

The men can come and go as they like and work on their own projects, or they can help with one of the many requests from the community, from building beehives and letterboxes to restoring furniture and working on other timber and metalwork projects.

The Men’s Shed Pomona is packed to the brim with machinery and works underway, as well as a greenhouse bursting with plants for sale, a pottery shed and a shipping container for storage, but this group is fast running out of space.

“We have so many people wanting to join,” says president Colin Thompson. “But we’re flat out fitting more than 22 people in here at the moment.”

The Shed has been busy working with Noosa Council to find a new home that will allow them to expand and welcome new members. More space will mean more activities for members, from small motor repairs to leatherwork and music, including a quiet space for the administration team to finally get some work done!

This driven group is diverse with different backgrounds and life experience, but they all happily come together in this serene place. As Colin explains, the Shed isn’t just somewhere men gather to “play” with tools, it’s somewhere to talk.

“Many years ago, it may have been a pub or a club where we would gather. With the development of the Men’s Shed movement, the pub or club with its inherent problems of alcohol and gambling has meant the Shed has become a healthier and preferred option,” he says.

“A place to talk is the priority of the Men’s Shed Pomona. There are many members who suffer the effects of PTSD and other mental health issues. For a few, being able to create with tools is providing the necessary therapy but there is equally the same number who come to talk and experience the camaraderie of the Shed.”

Mathew says the method of standing side by side is a great way for men to learn to share their thoughts and the results can be better mental and physical health, as well as whole-community wellbeing.

With his team, Mathew is currently researching the link between isolation, frailty and mental health, which he explains is a vicious cycle once a person begins to feel lonely. “They all feed into each other,” he explains. “The risk is, loneliness can cause a mood change and lead to depression and then when you are more housebound, you’re not getting out into the community and are inactive, that increases frailty and in turn, increases the risk of falls and so on. Social health is very important in maintaining physical and mental health.”

For him, community-driven organisations like the Men’s Shed are vital to maintaining community wellbeing. “This is an organisation run by men for men with very little government support,” he says. “But, the Men’s Shed provides a vital community service. As a result, they help reduce the strain on the health system, which is government funded. We must value things that help reduce the impact on the health system.”

Most of the Sunshine Coast’s Men’s Sheds do run on the “smell of an oily rag”, and others are snapping up government funding to bolster their offerings to the community and its members. The Caloundra Men’s Shed just received a grant for $239,000, a much-needed boost that will pay for a brand-new shed just a few streets away from its current location.

Founding member and Caloundra Men’s Shed treasurer Jim Lombard says it has been six years in the making, but the funding is a big win for the community group that is currently using old sheds at the former wastewater treatment plant on the corner of Queen and Allen streets.

The sheds are leaking and they are spread throughout the site, creating a disconnect between the members and their activities, but this hasn’t stopped the men of Caloundra Men’s Shed from creating one of the region’s busiest spaces that is bursting with a feeling of inclusiveness.

Jim travelled throughout Australia visiting Men’s Sheds along the way, discovering just what makes each one unique. He found that so many men were experiencing mental health issues and other challenges after major life changes like losing their jobs, retiring or experiencing the death of their partner.

When he returned to Caloundra, Jim knew there would be a need for a Men’s Shed in the local region. This burgeoning Shed started as just three guys in a lounge room helping seniors with odd jobs. Jim remembers the first $5 the group received for helping a local elderly couple change their light bulb.

“This couple had been waiting and waiting for an electrician, so it was great to help. It was the start,” he recalls. “Soon, we stopped going out to find work and it started to come to us. Shortly after that, the Bendigo Bank opened an account for us and deposited $500. The Men’s Shed was started.”

Today, the Shed has 60 members and a renewed energy as work begins on a new shed that will offer work stations, an office and a rear pergola where the men can relax with a cuppa and have a chat. The group receives continued support from the Sunshine Coast Council, the local Rotary Club and Bunnings, where they can hold a fundraising barbecue once a month.

Caloundra Men’s Shed president Phillip Ashby says the securing of a long-term tenure of council land and the new shed was a “big sigh of relief” for the members.

“The new shed will be nearly three times larger than our current one, which will open up a lot of opportunities for more members to join us. Men on the Coast, no matter what age, need somewhere to go to chat as most of the time they bottle up things and don’t have anyone to talk to,” Phil explains.

“We also have newer members joining as they have just moved to the area and don’t know anybody and are lost. This will be more so as the Coast expands and, in this current climate, I think it will be harder for the over fifties to find work if they have been laid off.

“The Men’s Shed gives the guys something to do with themselves and for others. The new, bigger shed will give us opportunities to do more activities such as setting up a craft room to learn to build toys, learn lead lighting and how to use computers.”

For workshop manager Harry Aucott, the Shed was a place where he could put his skills back into use after being made redundant in his mid-sixties.

“No one wants to hire you at that age,” he says. “It was okay for the first six months to a year but there I was at home with all these skills and tools and nothing to do. I won’t say I was suicidal but things got dark. Then I met Jim and he told me about the Shed and I have been here ever since.”

Harry says it is important for the Shed to generate an income through the members’ projects and community assistance, but he points out that the Men’s Shed needs our support. “We do quite a bit for the community and we enjoy it, but we are a community and we need looking after too,” he says.

“Some blokes come here just for a chat. They’ll come at 9.30 for smoko and not leave until 12. That’s what we do. We’re here to talk and share what’s happening.”

Jim adds that many men will finish their career and then experience feelings of uselessness or they may move from a large home with a garage to a small unit and suddenly they don’t have that space anymore.

“That is why they can come here and work on whatever they like,” he says. “They can help the community with a project or they can work on their own project. It is up to them and they feel useful.”

When looking to the future, Phil says he hopes to expand the Caloundra Men’s Shed membership base to include men of all ages. “I would also like to think that men of any age feel like they can come and join. I have always said that men’s health, whether it be mental or physical, does not discriminate on age. We are a Men’s Shed not ‘The Old Men’s Shed’ and we need younger members to keep this organisation going into the future.”

In Pomona, Colin says he believes it won’t be long until women also need a space where they can gather and put their skills to use following retirement after an influx of more and more women enjoying life-long careers that might lead to their social circle changing.

What we do know is that while Caloundra gets ready to move into their new shed and the team at Pomona meet with the council to secure more land to expand their footprint, the members of the Men’s Sheds are feeling positive. In the words of the Men’s Shed Pomona president, “the future is looking rosy”, and it’s up to the community to continue to support this wonderful, vital community service.