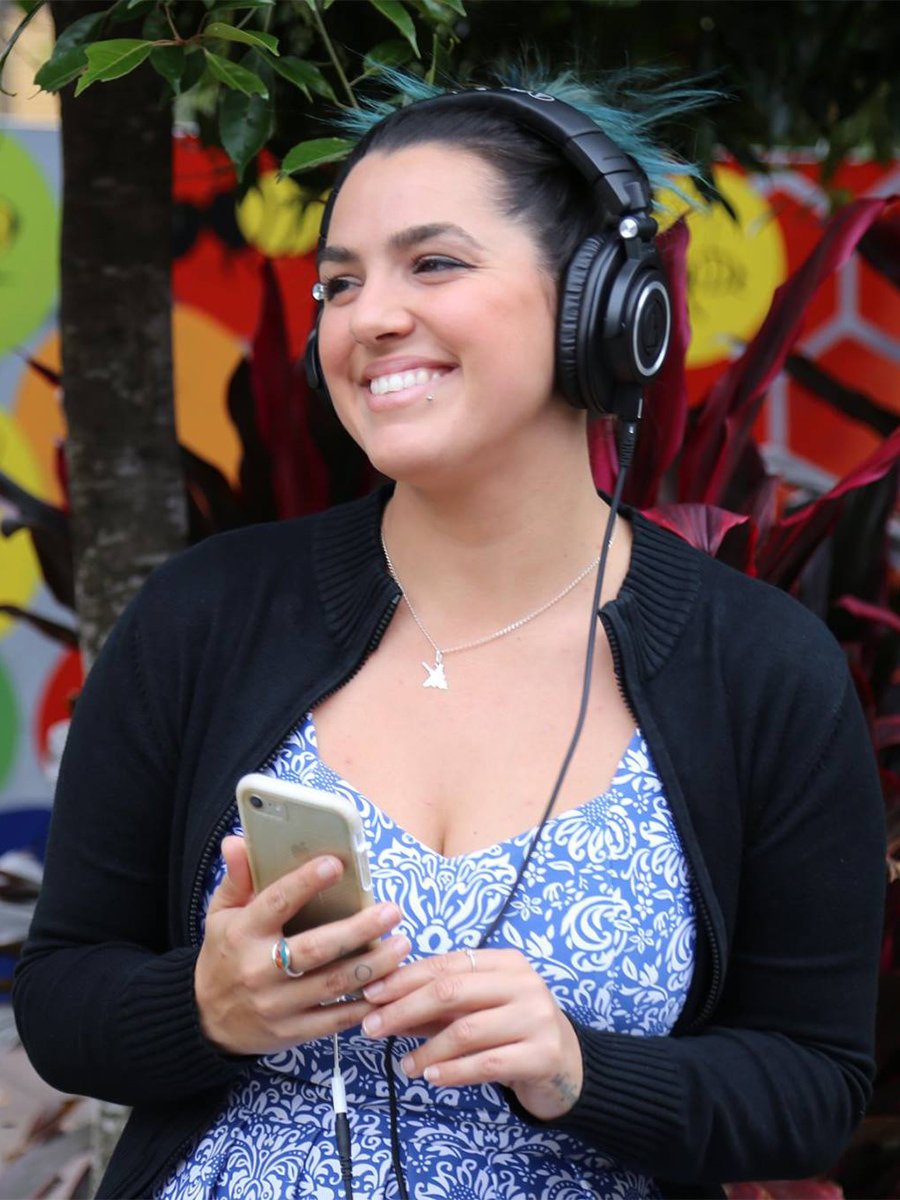 The voice of Powderfinger drummer Jon Coghill is in my ears as I stand outside Nambour Library. He’s telling me about his childhood growing up in Nambour through my wireless headphones connected by Bluetooth to my smartphone, which has an app open called Soundtrails. I’m about to embark on an augmented reality audio adventure through Nambour, where geolocation technology meets the primal pursuit of storytelling.

“My family lived here when it was a living, breathing sugar town,” Jon tells me, as if he’s right beside me recounting his life. “It was an amazing place for a kid to grow up. Riding bikes to your mate’s place on the other side of town, hanging out at the old library after school, swimming in Petrie Creek and going to the skate park and local pool on the weekend.”

He continues with a brief history of Nambour that takes no more than a couple of minutes before he gives me instructions: “Make sure you have your GPS and Bluetooth on. See that small pulsing dot where it reads ‘start’ on the map? That dot is picking up GPS and as you walk; the pulsing dot follows you. See those small translucent fields on the map? These are audio stories.”

As I walk into each field, a story about that location narrated by a knowledgeable local person is triggered without me having to do anything. No need to hit stop or play, the stories just unfold as you follow the Soundtrail, offering a deeply engaging and immersive experience.

From start to finish the Nambour Soundtrail can take up to one-and-a-half hours. If you’re a fast walker and don’t listen to all the stories, you’ll complete it faster. Sure, you can download the app and just play the stories from home, but you’ll be missing out on the real treasure of this app: its ability to engage all your senses and do a deep dive into the place.

Walking north along Currie Street from the library, I enter another sound field and the voice of Florence Comino (nee Venardos) begins. She describes how her dad owned the picture theatre in Currie Street, then built a new one and opened it in 1958. The Old Vogue Theatre became a Nambour icon, and I’m moved listening to Florence and her son Cos reminisce about what it meant to their family and the town.

Next, I reach the corner of Currie Street and Howard Street and the voice of Marie Nevin shares the history of Bayards legendary corner store. From here I continue down Howard Street, along Queen Street, Lowe Street, Ann Street, across to Quota Park, then along Mathew Street and around various points of interest until finishing in Mill Street.

It’s a fun, immersive and convenient way to learn more about the town’s heritage, directly from the people with lived experience. The brainchild of Nambour audio producer Hamish Sewell, there are currently 16 Soundtrails in Queensland and northern New South Wales, with Nambour being the first Sunshine Coast Soundtrail. This is just the beginning.

“We could do one for Mary Cairncross Scenic Reserve or Kings Beach, where you could have stories working in tandem as well as a choreographed walk,” Hamish says. “You don’t want to be walking more than a couple of kilometres. You could even have driving or cycling Soundtrails.”

The cutting-edge app was built by a small development team here on the Sunshine Coast, but its scope is limitless and it’s now being used internationally, by people in the UK and Canada who want to create their own local Soundtrails.

“I would say it cuts across heritage, culture and tourism,” Hamish says. “It’s effectively what you would call augmented reality. Augmenting is really about augmenting the world around you and audio brings the world alive around you – and because you’re not looking down at your screen, you won’t get run over!

“Because all the stories are GPS activated, you’re able to layer sound. Podcasts use what we would call linear sound. You push play and it plays from the beginning to the end, whereas a location-based audio app like Soundtrails is able to create very highly immersive audio experiences, because the audio is layered.

“That means, for example, you might have background sound that’s invisible. That background sound might be on a slow loop so you have a sense of where you’re walking, at a number of key points more site-specific stories might kick in and then you might have instructional sound – cross the road, if you want to go here take this path – all of these are working in concert. So it really is a very tiered and choreographed spatial storytelling experience, unlike podcasts which are linear. If you walk out of a sound field and walk back in, it will continue. It’s geared to think through how people walk through spaces.”

With a background in oral history and radio production, creating Soundtrails was a logical progression for Hamish, who is studying a PhD in locative audio. “I’d been working as a radio documentary maker with Radio National and a lot of the work I was doing was place-based. It was only being broadcast once, then disappearing. There are questions of digital material and its longevity. Stories and voices and memories and sounds have a real, natural affinity to places. I don’t think many people have understood looking at screens will only get you so far. It’s more meaningful when you’re standing on country, actually on site at the waterfall or crossing the bridge and you have that voice telling you the story.”

Version one of Soundtrails was launched eight years ago, however, a substantially more upscale version was launched at the Black Box Theatre in Nambour in March. Version two allows anyone, anywhere in the world to upload their own Soundtrail, with instructions available on the website.

The tech brain behind the project is Maleny software and app developer Kris Randall. Kris has spent 25 years in software development, working around the world for industries as diverse as shipping, fashion, banking and meat processing. In 2009 he started his first business, CoCreations, with his wife Angel Goulter Randall. One of their first apps was the excellent Woodford Folk Festival app.

“Version one of Soundtrails was very rudimentary,” Kris says. “At the end of 2019, Hamish and I started to have conversations about rebuilding Soundtrails and what was going to be possible. There was a massive list of all the things Hamish wanted to get in there. We spent a lot of time really mapping out the different configuration options.

“My junior developer Keaton Mustard, who has been with me for several years, spent a year on version two of the project. We’ve put an enormous amount into it. I love what we’ve done with it and it’s super important to me. Part of version two is that anyone can sign up and create their own Soundtrail for their own project. We have now got our first sign-up of producer Chris Brooks, who will be putting three stories on.

“My focus now is getting lots of people signing up and creating Soundtrails. A paid subscriber will get their Soundtrail featured in the gallery. You can sign up, make one and share it with anyone. There’s no limit to how many we can have. The architecture is flexible on multiple levels. This thing can scale to everyone in the world having a Soundtrail.

“I like that we are placemaking – creating a connection to place for people. I found the Myall Creek Soundtrail incredibly moving. It was an Indigenous massacre site. When I listened to that, it really did connect me in a way that was quite real. That part of Australian history was abstract to me – white settlers massacring Indigenous people. Listening to stories of descendants of people who were there made that real and connected that for me.”

Also an integral part of the team is Christine Parfitt of software development company Block and Table. Christine uses no-code tools to create custom websites and created the new Soundtrails website. She also works on strategic positioning for Soundtrails, coming on board as a partner with Hamish and Kris at the beginning of the year. Maleny-based cartographer Gavin James of Mapuccino creates the maps for the app and Hamish travels far and wide, connecting with councils, universities, school groups and Indigenous groups to identify and produce stories.

“It’s still early days yet, but increasingly more and more people will want to make available these types of storytelling experiences on site,” Hamish says. “We will see an increasing sophistication with the way people start to approach these types of experiences and we’re very well placed to push this into new places. I think we’ll become known as a place for storytellers, creative producers and local communities to build their own trails.

“I think we will continue to be commissioned because the material we do has a very long shelf life. The stories we’ve built are not going to disappear; they’re good for many, many years.”