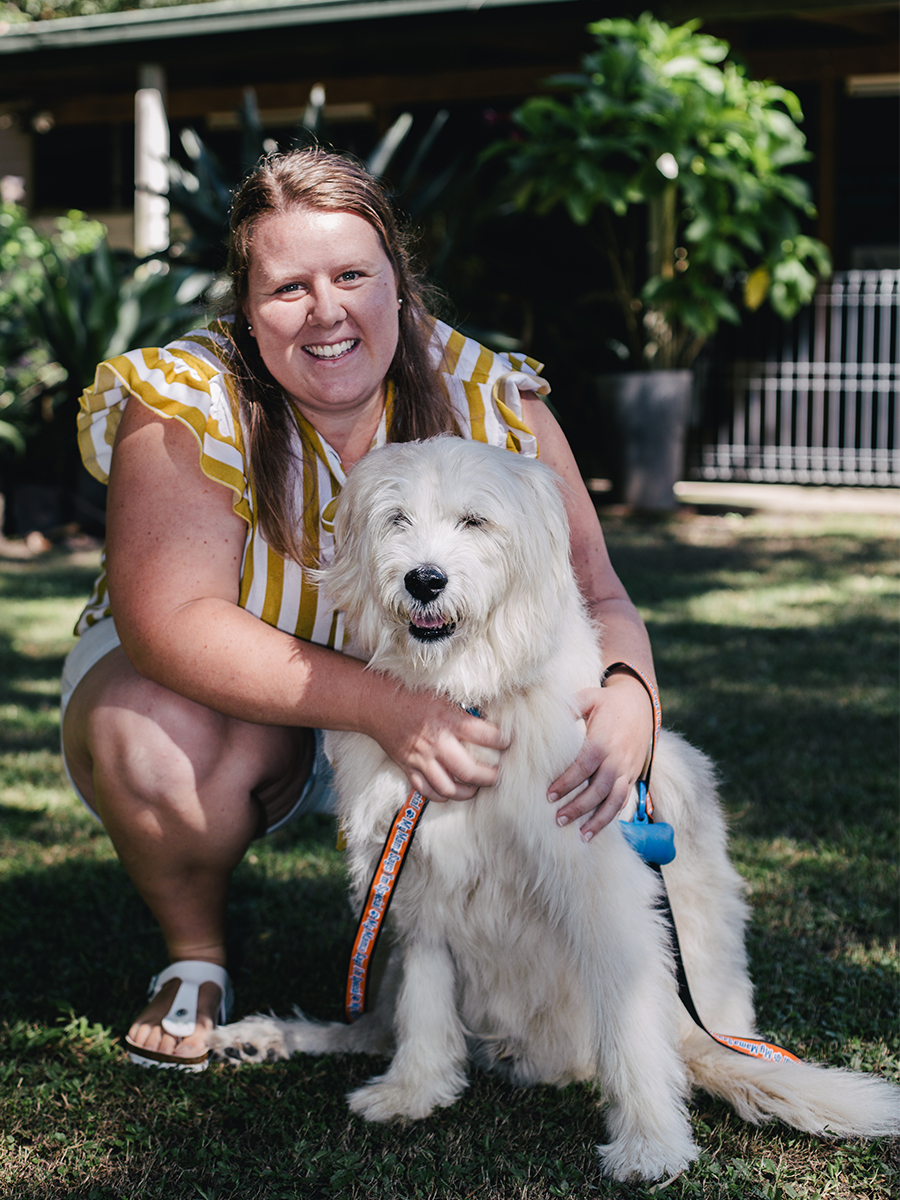 Like many dogs, Soda came to the Sunshine Coast Animal Refuge from the pound. An unclaimed bearded collie, his chances of adoption weren’t high. With only three legs and a number of health issues – a growth in his eye that needed surgery, ear infections and bad skin – he was a dog in desperate need of someone to love him.

Enter Taz Kempf, a registered nurse who had just moved out of home to her own place at Baringa. She had lost her family dog three months earlier and was looking for a new pet, but being a shift worker, thought a cat might be a better option.

“As soon as I saw Soda, I fell in love with him,” she says, giving his scruffy white fur a good ruffle. She’s brought him back to the refuge, which is known as SCARS, on a sunny autumn day for a visit, and to share the story of how they came together.

“I just loved his face and his eyes. When he has his long hair you can’t see his eyes and he’s super cute – he’s like a big teddy bear. I knew a three-legged dog wouldn’t mind being inside and I’ve got a single-level house, so everything about him fits my lifestyle. Being an older dog, I knew he wouldn’t need training, but I didn’t know what sort of work a three-legged dog required. SCARS had suggested water rehabilitation and short bouts of exercise. The first couple of days it was a bit difficult, just learning what he could do and what he liked and didn’t like, but that comes with any pet. I enjoy having him – three or four legs, it wouldn’t bother me.”

Taz and Soda go for a gentle walk each day, or they jump in the car and head to his favourite place, Currimundi Lake. Enjoying the weightlessness of the water, he swims for an hour or two, getting much-needed exercise.

“I feel very lucky,” Taz says. “Everyone said it would be hard work, which it has been initially, just getting to know Soda and his personality. But I’m definitely the lucky one. He just brings so much to my life – happiness, company, a reason to get up and do something for the day. He forces me to get fresh air and exercise and meet new people. He’s a real conversation starter and I think he’s been a great advertisement for SCARS.”

SCARS is celebrating its 40th birthday this year. Established in 1979, it is a non-profit organisation run by volunteers and surviving on grants, donations and bequests. One of Australia’s first non-euthanising shelters, it has saved an estimated 30,000 dogs and cats from facing the inevitable at the pound.

The recently appointed president of SCARS, Penny Brischke, is an integral part of the team. She joined as a volunteer 13 years ago and took on the role of manager from 2012 to 2017, followed by vice-president and treasurer. She has seen the facility improve immensely in the time she’s been involved, such as the upgrades to the buildings and tropical landscaped gardens, which are maintained by volunteers.

“When I first began volunteering, it was a bit confronting at times,” she says. “Initially it was the volume of unwanted animals, some not in very good condition. They’d been neglected and it was quite sad to see how they’d been affected by whatever they’d gone through. But I quickly came to realise it was a happy place at SCARS, because as soon as we got them, they got the vet care they needed and they got fed. I always say it’s hard when you first come out here, but then you realise these are some of the better cared-for dogs and cats on the Coast. They have warm beds, a clean shelter, love and affection, full tummies, the whole bit.

Penny says SCARS’ strict non-euthanasia policy was one of the main attractions for her, as it is for many of the volunteers. She tells a heart-warming story about a big dog who was put on a plane from Sydney in 1999 with a sign around his neck saying: ‘take me to Sippy Creek’. His owner couldn’t look after him anymore and didn’t want to have him put down. When the dog arrived, an airport staff member took him to the refuge and the dog was eventually adopted.

She has plenty of these touching stories, as do all the kind-hearted souls who work at SCARS. Rosy Symons from Alexandra Headland takes dogs and cats in temporarily and often ends up keeping them. She has been volunteering at SCARS for 18 years and is a permanent foster carer. She becomes emotional when she talks about Gucci, a rottweiler
she had for 11 years.

“She was found on a road and when she came in she was about the size of my foot,” Rosy says. “Everybody thought it was a little shih tzu. She was the runt of the litter, but she ended up being a rottweiler. I fell in love with her and couldn’t part with her. I named her Gucci because I used to carry her around in a tiny little Gucci handbag.”

Sadly, Gucci had to be put down due to ill health and along came Black Betty, a cat who came into the refuge and did not play well with others. She’d entice people to come close to her then take a swipe at them.

“She was pretty feisty because she was scared and I think she’d been given a rough time,” says Rosy. “The intention was she was going to come to me and I was going to settle her in. I don’t think she would cope anywhere else. She needs to come to me on her own terms and when she’s feeling comfortable.”

Rosy assists Penny in marketing and fundraising activities, such as the Pause for a Cause Long Table Lunch in March, which raised $21,000. As part of the 40th birthday celebrations, a series of events are being held throughout the year, including a twilight walk at Alexandra Headland, aimed at raising awareness.

SCARS receives a small annual grant from the Sunshine Coast Council, but otherwise it must raise the money it needs to stay in operation – an annual cost of $800,000. According to manager Petra Westphal, SCARS wouldn’t exist without its volunteers.

“We have a big volunteer workforce of about 250 who do a brilliant job,” says Petra. “They all do different things on site and off site. They go to shopping centres and empty the collection bins, bring donations back here, we have foster carers, people who help out with events. We can always do with more – it’s an endless amount of work.”

While the majority of animals come to SCARS from the pound and are sadly unwanted, some are surrendered willingly by heartbroken owners who can’t continue to care for them. “We don’t judge around why people surrender their animals or why animals end up here,” says Petra. “We understand sometimes people’s situations are really complex and they just can’t keep their animals. Sometimes it’s due to older age and having to move into care. Our job is to assess the animal, work out what their new home should look like and find a new owner for them. We have a very comprehensive process where we make sure we find out why people are looking for an animal, what their living environments are, then match the animals we have here to those environments. We try not to have a really vibrant dog who lives in an apartment, for example, because we know it won’t work out.”

At the time of writing, SCARS had 32 dogs and 47 cats and kittens at the refuge, with more still in temporary or permanent foster homes. The onsite capacity is 45 dogs and 60 cats, but the foster program allows for a greater off-site capacity. At present, there are 30 cats in foster homes, which can go up to 50, and more than 40 cats and dogs in permanent foster care. This means they’ve been adopted out, but SCARS continues to look after their vet care for the rest of their life.

Puppies and kittens tend to be adopted quickly, but some of the older cats and dogs can end up bunking down for quite a while. To bring attention to animals that have been at the refuge for longer than 100 days, Penny created the Scars 100 Club.

“My focus has changed from running the refuge to advertising the animals and trying to find homes as soon as possible, which is why I created the Scars 100 Club. People in the community seem to really get behind those animals; they hate the thought of animals being there for 100 days.

She also ran an Easter drive which resulted in 37 cats and kittens being rehomed in two weeks. It’s one of the many creative ideas she has come up with – such as the Desex in the City program, established to encourage owners to desex their animals.

“There are prolific issues with the over-breeding of cats on the Sunshine Coast,” she says. “We’re taking litter after litter; it’s just non-stop kittens. One pair of cats in seven years can produce 420,000 kittens. We’ve subsidised over 3000 cats in the community being desexed. Some people can’t afford to desex their cats, and we’ve committed over $120,000 to help people desex their cats through their local vets.

“We really need to expand our education program at the refuge so we are getting the message out about desexing and giving them the care they require, understanding that having an animal means it’s for life. Our motto is: bringing pets and people together forever.

“There has been a lot in the media about refuges closing down that haven’t been providing the right care for the animals. We’ve been around for 40 years, we’re not government-funded and we’ve been sustaining ourselves with the help of the council and our community. That’s got to tell you the community trusts us to look after our animals properly and make sure they’re healthy and support them wherever we can.”