Nambour is where it's at! 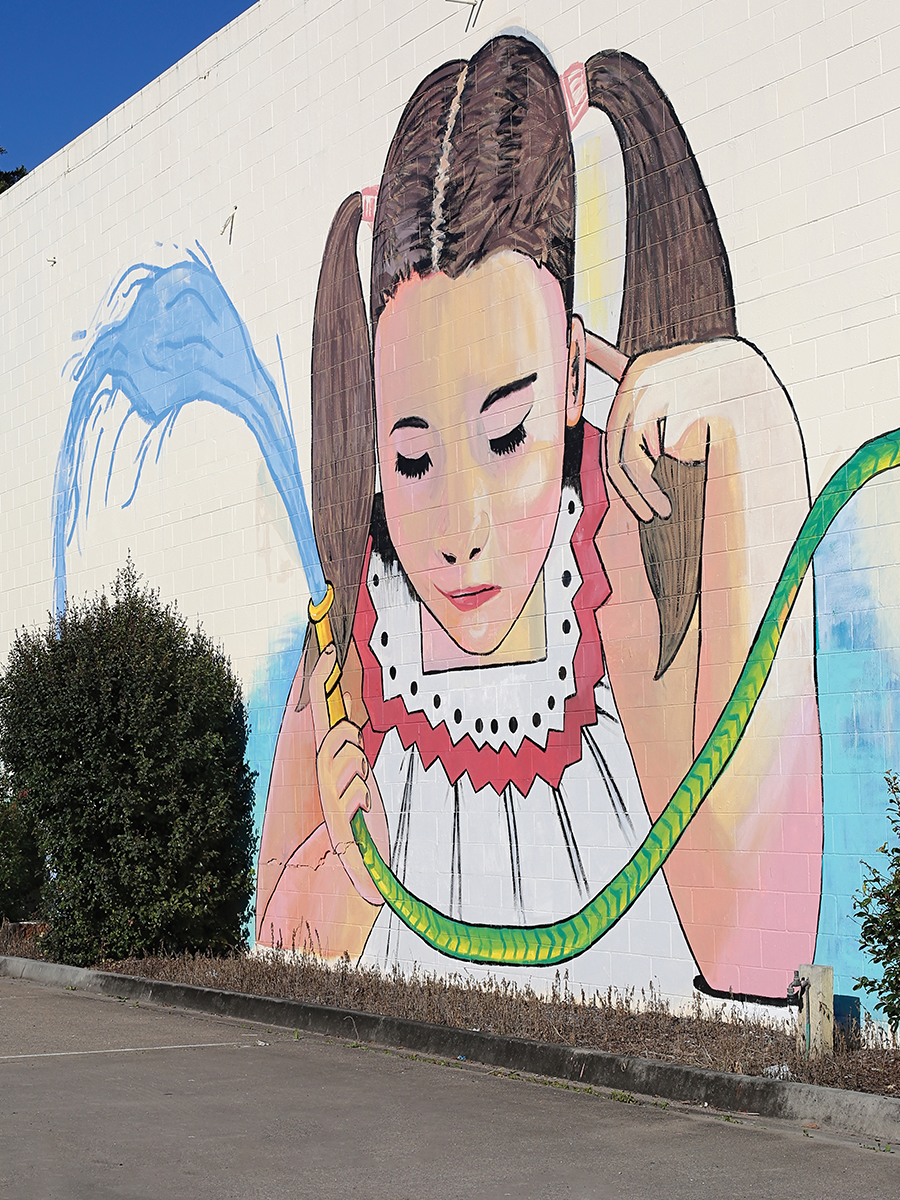 Cool cats in dark sunglasses and hats are milling around C-Square in the heart of Nambour. Jazz is wafting out of four venues and there’s a palpable buzz in the air. It’s the weekend of the Nambour Winter Jazz Festival and one of its venues, The Bison Bar, is full to the brim with people relaxing on vintage couches as they tap their feet to the music. Retro cabinets laden with old lamps line heavily curtained walls and it feels as though we could be in a smoky New York jazz bar. But walk outside into Currie Street and we’re back in Nam.

Once a bustling commercial centre, it’s no secret Nambour has seen better days.

Darren Bailey is tall and thin with a friendly face, a courteous manner and slightly greying hair. His family has owned Nambour Book Exchange for 35 years, so he’s seen the town go through many ups and downs. Nambour was really rocking a few decades ago, he says, and he’d like to see it get its mojo back.

“Back in 1985, Nambour was the hub,” he says. “It was the place to be. Sunshine Plaza wasn’t there and people didn’t go to Maroochydore. I like to err on the side of positivity – I want the shops above me to be full again. I’ve just signed a three-by-three lease, so I’ll be here for another six years at least.”

His cavernous bookstore occupies a subterranean space that extends from Currie Street along Howard Street, all the way to Queen Street. It’s packed with more than 200,000 books in excellent condition, vintage magazines and collector’s items. When you pass the canary yellow door and venture down the stairs, you’re not quite sure what you’ll find, and that’s the magic. You could lose yourself for hours browsing through the impeccably organised bookshelves. The store is clean and bright and Darren is a generous host.

“It’s more or less like a library,” he says. “People come in, give me a few books and go and grab an-other one. There’s not a lot of money to be made, but thankfully, my customer base keeps coming in. They come from as far as Brisbane and Gympie.”

Darren’s not the only one hankering for Nambour’s halcyon days. Enthusiastic Nambourians have invested substantial time, money and ideas into reinventing the town. One initiative is the Sunshine Coast Council’s Nambour Activation Plan, a key pillar of which is the Nambour Heritage Tramway Project. Struggling to attract funding for a number of years, the tram plan is now back on track thanks to a donation of $1 million from Sunshine Coast philanthropists Roy and Nola Thompson.

It’s hoped reintroducing this historic attraction will appeal to tourists. The proposed tram will be a 600-millimetre gauge, solar-powered, electric-battery model, so it won’t require electric overhead cables. It is believed it will be the only one of its kind in the world running on a heritage rail line – a world-first for the Sunshine Coast.

As you stroll through the heart of Nambour, along Currie Street and down Howard Street, the tram tracks are a feature you can’t miss, hinting at the sugar cane days of old. Chatting to various locals and store owners, I receive a mixed response about the tram’s potential to reinvigorate the town. Some are enthusiastic, others are doubtful.

Another initiative is Reimagine Nambour, a project that has brought together government, community and business leaders to mastermind a strategy to unite and uplift the town. External con-sultants are creating a formal action plan to strengthen Nambour’s economy by finding out which businesses should be enticed to the town to best service the needs of the community and create sustainable, long-term economic activity. While it’s not a council initiative, Mayor Mark Jamieson and Councillor Greg Rogerson have committed $25,000 each towards the project, while Federal Member for Fairfax, Ted O’Brien, secured $50,000 under the Building Better Regions Fund.

A town flourishing with cultural diversity and creative talent, Nambour certainly has an identity all its own. Set in a valley with pretty mountain views in all directions, Petrie Creek winds its way through the town like a sleeping snake, with Quota Park and Petrie Park set along its banks. Nambour is quirky and eclectic and, in recent years, has embraced a retro vibe. There are vintage stores, antiques stores and op shops dotted around the place, harbouring bargains and treasures from bygone eras. You’ll find a handful of op shops along Howard Street, as well as the Old Ambo, an ambulance station that has been rather brilliantly converted into an art gallery space.

Another Howard Street highlight is Backbeat Records, which sells vinyl albums for as little as $5 each. The store’s walls are plastered with music posters and paraphernalia and it’s a delight to flip through the records and remember the tactile thrill of buying a record, before everything went digital. Ah, the good old days. Nambour seems to have one foot in the past and one foot pointed towards the future, and that’s what we love about it. Backbeat Records is easy enough to find – just look for the hot pink Jimi Hendrix mural on the exterior wall above the store.

Which brings us to another defining feature of Nambour: its street art. Dozens of murals, from the David Bowie mural at the Royal George Hotel by Sunshine Coast artist Ian Scorey, to Ross Hol-loway’s incredible tiger mural on Price Street, the beautiful murals at C-Square and the bus stop adjoining the train station and a stunning mural of a girl holding a hose by Jenny Saunders in How-ard Street, the Nambour Street Art Trail is reason enough to visit the town. There’s nothing like it anywhere else in Queensland.

The annual Street Art Festival, held in October, was the brainchild of Nambour newcomer Lorraine Taylor and fellow Nambour local Cherry Powell. Lorraine has lived on the Sunshine Coast for 20 years but calls herself a “newbie” as she moved to Nambour just three years ago. She runs a charming pastel-hued 1950s-style ice-cream and pancake parlour in Queen Street called Sprinkles, which she’s had for 18 months.

“I came here to buy a house because the prices here are phenomenal,” she says. “I went down-town and I felt the safest I’ve ever felt. I’m a sign writer and along with Cherry, we organise the Nambour Street Art Festival as a way to give Nambour a lift. We achieved 16 big murals last year and this year we’re aiming for another five. We don’t do political or dark murals, just happy themes and environmental or conservation themes that will build the town up. Last year we had people from all over the Sunshine Coast, Melbourne and New Zealand attend.

“It’s a community event and we’ve had businesses all over the Coast support the festival. Basically, the Sunshine Coast community stepped up to help Nambour. We have so many people drive through Nambour to see the street art. I want to help develop the uniqueness of this town.”

Lisa Fry is another local identity who has been working towards an improved Nambour. She grew up here, then moved to Melbourne to study. Having lived away and returned, she has a sense of Nambour’s untapped potential.

“When I came back to Nambour I thought, oh my god, this place is Brunswick Street waiting to happen. But that was 25 years ago! My personal opinion is we have way too much commercial real estate and I think that once it becomes commercially viable to turn that into residential real estate, it would break it up around town a bit. I believe strongly in living in town. We’re on the train line, which is mooted to be duplicated, and it’s actually a really nice town. When you get up on top of C-Square, it’s a 360-degree view of mountain ranges. We’re surrounded by lush hills, we’re 10 minutes to Maroochydore and 10 minutes to the hinterland. It’s a really good spot.

“Retail is never going to be what it was. That’s a global issue; it’s not unique to Nambour. I had a real estate agent show me lots of properties around town – there are some gems, 1950s exposed timber, beautiful staircases. They’re crying out to be done up.”

Lisa is a member of the Nambour Chamber of Commerce and says Nambour is a great family town. “I love Nambour and as a single mum of teenage kids, my daughter can walk to school and my son can hop on the bus and go to uni,” she says. “My kids were going to a private school on the coast and my daughter said, ‘I hate it here, I want to go to Nambour high school’. She loves it and is thriving there. She likes the diversity. She’s not being scaffolded; she’s more independent, able to make friends. She has learnt a lot about how some people live and she’s performing better there than she was at the private school.”

Lisa believes the key to creating a new Nambour worthy of its glory days is having more people living in the abandoned stores in town – perhaps creatives who live upstairs and work downstairs – and shifting the focus to industries other than retail, such as agribusiness. She also likes the idea of galleries and art spaces, which would not only beautify the town, but also attract visitors.

A new community art space, Vive Pachamama, recently opened in Queen Street. It offers art classes on Mondays by donation, as well as art therapy classes with Cindy Parker. It has been set up by sisters Tara Sutcliffe and Tamarind Croft, who owns Wilga, the bespoke designer clothing store next door. Tamarind’s gorgeous handmade clothing designs are sold through her store in the Dandenong Ranges in Victoria, and this is her second store. The day I visit, Tara is minding both stores with baby Ocean and dog Tofu to keep her company.

“There’s a lot of new energy coming into the place,” Tara says. “I really enjoy Nambour because you get a bit of everyone. The people are really interesting. They’re honest and real.”

Queen Street is a pretty street to explore, with hippy stores and jewellers, vintage clothing and the acclaimed Husk & Honey gluten- and grain-free cafe. A relatively new cafe attracting a lot of inter-est is Nambour Social, on the corner of Currie and Lowe streets. It gets rave reviews on Trip Advisor and people drive from all over the Coast for its excellent food and coffee. Then there’s Switch Espresso Bar at C-Square, which is about to start comedy nights, and plenty of other local stalwarts.

Just upstairs from Switch Espresso, on level one of C-Square, is the wonderfully refurbished Majestic Cinema. It’s another Nambour gem, offering blockbusters and new release films for less than you’d pay at other cinemas, as well as one-off screenings and documentaries.

Sharing level one with the cinema is a bit of a cult favourite with locals – Urban Fiction, the Sun-shine Coast’s only dedicated comic store. It hosts weekly Dungeon & Dragons, board games and video game tournaments at Level Up Lounge and also buys and sells comic collections. It’s geek central – and we mean that in the nicest possible way
Nambour has a lot going for it. The Queensland Garden Expo attracts thousands of people to the town each year in July. Tramfest brings people together for food and music under the stars on the third Saturday of every month, and there’s always something fun happening around town, so keep an open mind and if you get lost, just look for the tram tracks.