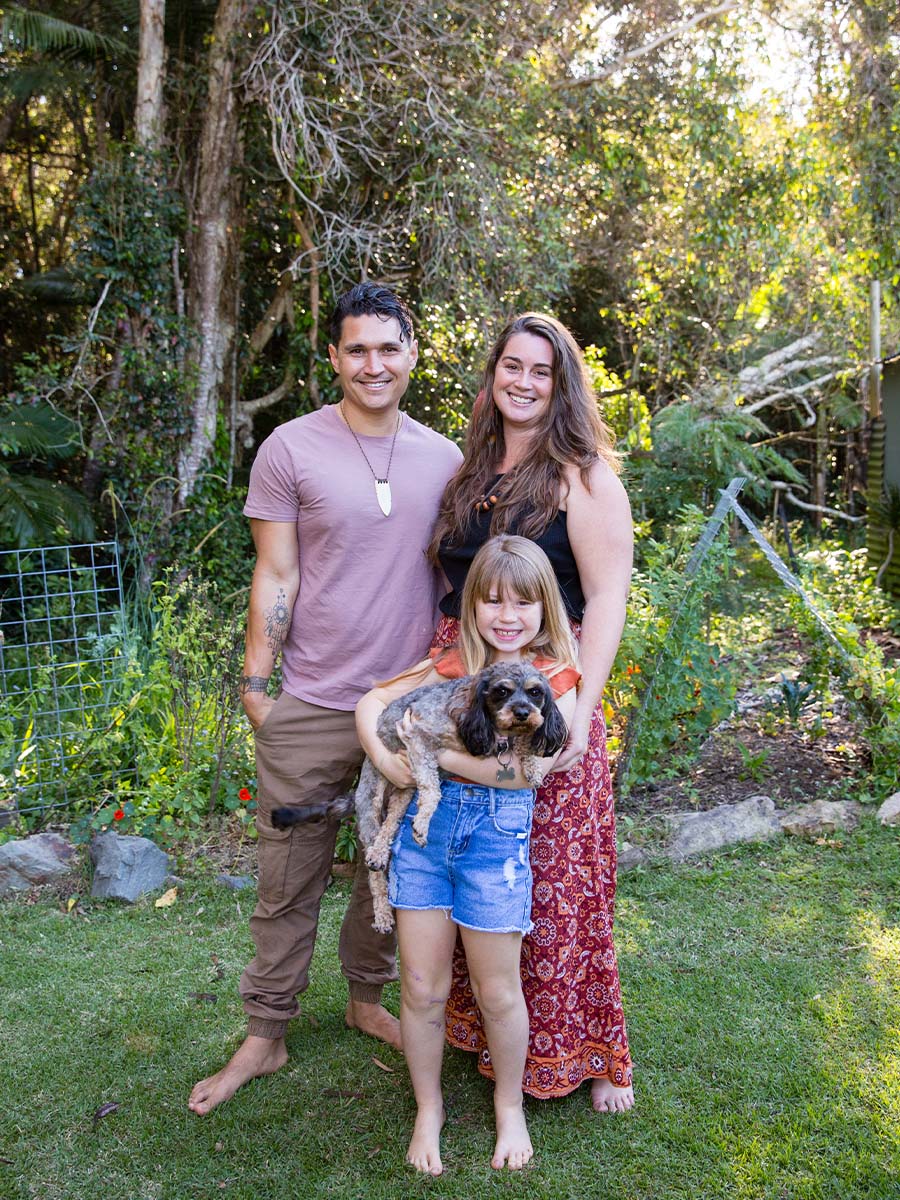 On an organic farm in Doonan, Trent and Teagan Banyan live a simple life with daughter Mala and dog Coco. Their home – a converted caravan – sits on open land, which backs onto rainforest. A nearby community garden provides food, and the farm is home to pigs, and banana, citrus and arrowroot plants. Chickens can be heard clucking as they run free in the Banyans’ backyard, challenged in volume only by seven-year-old Mala’s squeals of delight as she plays on a rope swing hanging from a nearby tree.

The Banyans have no television – they prefer it that way. Instead, they spend their spare time lying in the sun, practising yoga and meditation, connecting as a couple or family, and dining under the stars around the glow of a fire. They lead holistic, harmonious lives of mindfulness and manifestation. It keeps their emotional and physical buckets full.

This way of life is “pretty magical” Teagan says, and a far cry from their traditional upbringings. Trent grew up in Brisbane. A son of a single-parent family, he attended private schools, played soccer and had no holistic influence in his earlier life. Teagan was also raised solely by her mother, but her childhood was slightly more alternative.

“I grew up in Mooloolaba,’’ she says. “I had a pretty beautiful upbringing. We only had what we needed but we had so much love, so much fun. I didn’t meet my father until I was 14. He left when I was four months old. My mum was what you would call alternative. I grew up knowing my crystals and started meditating when I was eight. I had a healthy upbringing from my mum.”

The Banyans are one of the many Australian families who are exploring a new way of living. The zeitgeist movement of consciousness has similarities to the free-spirted counterculture of the 1960s hippy movement. Both movements reject materialism and celebrate the mind and spirit. But the psychedelic music and drugs synonymous with the former are nowhere to be seen in modern age. Living consciously is about making conscious decisions in every aspect of life, from the food you eat to the clothes you wear and the work you do. Mind-altering substances such as drugs and alcohol generally don’t play a part in the lives of those who are committed to conscious living.

For Teagan and Trent, the inception was a life-changing journey to South America. Before this, Trent had worked in a high-paying construction job but had begun to realise there was more to life than money and long hours. “We crossed paths with a woman in Guatemala,” he jovially recalls. “She told us there was a meditation centre over the lake and I was open to that.

“When we got to the meditation centre we stayed a whole month, from full moon to full moon,” Teagan continues. “We would wake up and do meditation, do yoga. We were living in our spiritual world and still partying. We were still young and exploring and not quite aligned yet. That meditation really changed things.”

Trent says, “Numerology, Kabbalah, tarot. Whatever you got drawn to they would support you through that. I cut off my dreadlocks, stopped drinking alcohol, stopped doing illicit drugs. I cleared a lot of things off my chest and it was there that I started applying for my acupuncture degree.”

Today, Trent is sought out by people of all ages and backgrounds for his mentorship, energy-healing workshops, bliss-out community events, retreats and work with the pillars of chi flow. He is a familiar face at the Sunshine Coast’s growing list of alternative events including Pranafest. His business, High on Chi, now has two centres – Chi Hub Noosa and the recently launched Chi Hub Nambour.

“In the early stages of our relationship 17 years ago, we wrote on a sheet of paper that we wanted to open a holistic centre, and that’s what we have done,” Trent says. “It’s all connected to us, our relationship, where we are in this life and in this world.”

Trent no longer aligns himself with traditional acupuncture, preferring to connect with clients spiritually through the new-age esoteric approach.

“I began to feel restrictive to the offerings of traditional acupuncture,” he explains. “When you are high on chi you are in the flow of life, you feel more connected to spirit and your beliefs and perceptions feel more balanced.

“The yin and the yang of your body is more in harmony and you feel like you are able to achieve whatever it is that
you desire. It’s the highest of highs and the purest. You are simply tapping into ancient traditions of living to promote good health and longevity.”

Chi practices promote a connection with nature, mindfulness, a healthy sleep routine, breath work and a focus on life purpose.

“I get FIFO guys who hate their jobs and being away from their families, but are trying to figure out how to make an income. I support them,” Trent says. “I have young 20-year-olds who don’t want to be partying and drinking anymore. They tell me they feel lost and alone and are looking for a new path.”

Teagan and Trent are aware that their way of life may not be for everyone and they welcome criticism just as they do every aspect of their lives: with positivity, love and hope. But they do believe that more people are aligning themselves with a conscious way of living.

“I think COVID reset some values for a lot of people right across the globe,” Teagan says. “In a lot of communities around Australia, people now value the need to grow their own food and to come back to the land. They are looking out for the community, the elderly. That is valuable, bringing that sense of love and community.

“People question how this can shift in normal everyday life. But I do know some of the conscious community ways – such as home schooling – COVID created more of this. People are now seeing the value of why tiny home movements have been getting stronger. We are all in normal jobs, not in alternative jobs.

“But we get to come back to this community.”

The conscious movement is growing momentum on the Sunshine Coast largely due to the region’s affinity with nature and pockets of community rarely found in the city. It was the birth of Mala that spearheaded the Banyans’ desire to connect at a deeper level with nature. This craving led them here.

“We started to integrate, living as a whole with our work and life,” Teagan says. “The connection to the land has really shifted our life again. There are seasons and we are just part of it. Now we are one with this land. It has been a really beautiful connection to nature and ourselves.

It’s a philosophy echoed by Sunshine Coast-based musician Aaron VanderAa, who at 30 speaks with maturity beyond his years.

“Manifesting. It’s the power of continuing to move towards positive intention and aligning your thoughts with your dreams. Yes, bad things happen, life hits you, but you need to keep in that way of thinking about what aligns with your soul. Why you are here? Manifestation doesn’t necessarily happen at a drop of the hat. But if you have a vision, have a goal and keep putting one step in front of another, things happen.”

Aaron and brother Levi, who together make the celebrated indie-soul-rock duo of VanderAa Collective, are leading the way in the movement of healthy, conscious living for thousands of young followers. The celebrated pair are the founders of one of the Sunshine Coast’s newest events, The Secret Garden Oasis. The second annual festival is earmarked for February 2022 and is a celebration of music, interactive art and connection.

It is a raw collective of expressive movement, spirituality and, above all else, self-expression and a collaboration of the brothers’ own experiences of discovery and consciousness from life on the road.

“We knew pretty early that music was a love and passion and something we wanted to do for the rest of our lives,” Aaron says. “Our parents are our biggest supporters. Our mother is an artist and Dad loves music so they constantly nourished that passion.”

The pair spent eight years travelling through Australia, Europe, Canada and the US – where they performed at the celebrated Burning Man festival.

“This whole cultivation of music and arts led us on this path. When I was gifted a didgeridoo from an Indigenous elder in Darwin, a strong bond was formed with the culture and we carry this to this day,” Aaron says.

“I’ve had some deep experiences with the didg that left me in feelings of more than the five tangible senses. For that, I’ve been on a spiritual quest. If you live a life of purpose and do good things for your body, you will naturally reside in that space of love and gratitude.

“Conscious living is just building awareness to a lifestyle that supports your dreams. And just figuring out how that is possible.

“If you are in a space of love, support and compassion, you actually see that manifest within your world. At the end of the day we all have the choice and that’s the beautiful thing. It’s why we are all here.”

“You don’t have to change your whole life,” Teagan Banyan says of adopting a more conscious way of living.

“There are simple things you can do at home. I get up in the morning and I brush my body with a brush. While doing it, I say little affirmations to myself. That’s one simple thing. I might do five minutes of dance, or lie in the sun. All of those things bring me back to myself and add up through the day. We don’t have a TV or listen to the radio and that has really helped with connection and our connection to creativity. It’s about starting with something simple like switching off from negative media.”

In today’s modern world, yoga, Pilates and meditation are easily accessible with online tutorials readily available. The art of mindfulness is also a growing movement in western cultures. Popularised by Dr Russ Harris’ The Happiness Trap, mindfulness is a psychological toolkit used to enhance health, wellbeing and life. It’s the art of focusing or refocusing the mind on positivity by engaging fully in the moment.

Those people who adopt a conscious way of life also consider each decision carefully – do these decisions align with your goals or purpose?

As Aaron VanderAa says, it can be as simple as considering your food choices.

“Life is all about those minute choices and decisions. It’s understanding your vision and bringing it down to how and now. It’s eating a healthy bowl of food instead of a burger, or going for a walk. It’s as simple as saying, ‘today instead of feeling bad, I’m going to allow myself to feel grateful to be alive’.”